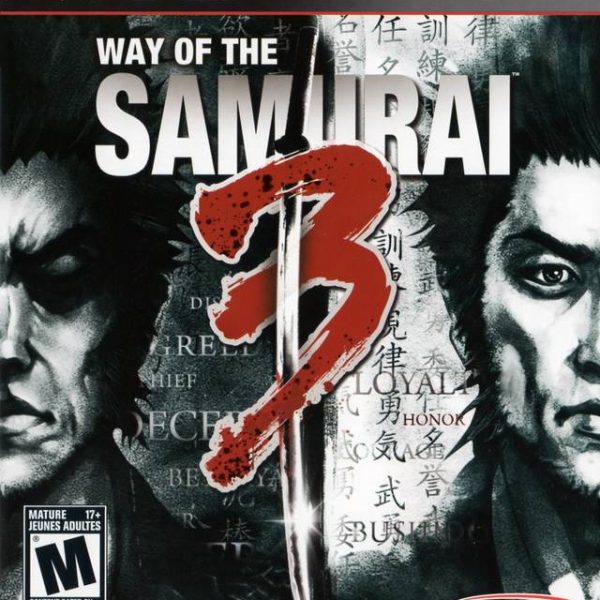 The Way of the Samurai games seem to be decreasing in points and reputation according to most “professional” game review sites. The way I see it, the games continue to stay entertaining. Way of the Samurai 3 the next installment of this over-shadowed franchise, and once again players take control of an unnamed ronin. It’s all there: choices, allies, enemies, weapons and multiple endings. Aside from some graphical issues and a camera that can act up, Way of the Samurai 3 is a fun, open-ended adventure that once again lets you become the samurai you wish to become.

Our stories open as most (none) do in ancient Japan, during the Sengoku period. Rain is falling, farmers are farming and a lone warrior that you get to customize from head to toe is slowly limping across the field, clearly in pain. This warrior is you, and the first folks you meet in this field are two farmers. Upon asking how you’re feeling, you are given choices on how to respond. From there, the game opens up as you make your way through the town of Amana. You’ll meet some oppressed villagers in the village of Takatane, the cunning Ouka Clan, and the diabolical Fujimori Clan. The way they regard you and view you is dependent upon your choices and how you treat others. Will you become an honorable samurai or will you be a dishonorable ronin? Who will trust you and who will shun you? The choices are limitless, and once again, you are free to play however you please.

So, here we are again. You might be asking what has changed since Way of the Samurai 2. For starters, game play is a lot more fluid and open ended this time. During the conversations you have, you can enter a ready stance or draw your sword at any time. Remember those farmers who meet you? Well, if you’re not feeling it, you can just draw your sword and hack them to bits. You can also gain the trust from a variety of NPCs. This new “partner system” lets you form bonds with folks that will, eventually, move into your safe house and grant bonuses. Your safe house is where you store your extra weapons, money, items and the like. Thus, having a partner will benefit you because it increases a benefit of your safe house. While your safe house played a good role in Way of the Samurai 2, now you can actually move around it and interact with your partner and all of the objects within. To actually advance the plot, it’s standard Way of the Samurai fare. A world map allows you to travel quickly across the town, and certain locations are marked with an “!” to indicate an important story event. These are where your choices will make the most impact. There are over 20 endings to witness, so your choices will cause some sort of impact on how your story ends.

Another nifty change is that there are a ton more weapons to use, master and enhance. Sure, you have swords and spears, but what is not to love about destroying your foe with a giant turnip? Maybe wielding two weapons at once is your style. Like before, you will earn experience points based on the type of weapons you find. Each weapon has a variety of stats, and new to Way of the Samurai 3 is the weight of the weapons, which needs to be taken into account. Combat is as fun as ever, but also just as challenging. Now, you can perform blunt attacks in order to knock out your enemies. There is also the ability to push or pull an enemy attack after a successful block. When this is done properly, you will be able to execute an instant kill. Now, you might be thinking, “big deal” am I right? Well, one instant kill will lead you to a chance to perform chain kills. A face button will appear on the screen for a brief second and it is up to you to press on time. If you succeed, the next foe will get killed in one slice. Another face button will appear, and this process will continue until you mess up or you run out of enemies to kill. It’s quite fun and entertaining to watch the body count rise.

With a huge variety of weapons to master and plenty of choices at your fingertips, it sounds like Way of the Samurai 3 hasn’t changed much since the beginning. Well, one of the more noticeable but also upsetting changes is the look. Graphics are a bit sharper, but they don’t utilize the PS3 like they should. There is much more variety to the characters and environments, but the camera has a tendency to get jumbled when too much of this good stuff gets on the screen. Worst of all is that there will be times you experience some massive slowdown when the screen gets cluttered. I expect better from the PS3. The game is spoken entirely in Japanese, which I feel is necessary for a game about samurai. They’re from Japan. They speak Japanese in Japan. Deal with it. The music is not memorable. Typical flutes, violins and harps take over the sound track and while it serves as good background music, none of the tracks are worth hunting down for outside listening.

There you go! Way of the Samurai 3 is another great addition to the series, despite some issues with the graphics. Since there are over 20 endings to unlock, you’ll be busy for a while if you want to see them all. Furthermore, upon each completed game, you will receive samurai points. As you accumulate these, you will gain the ability to further customize your character with accessories and armor. For example, you can have them sport an Elvis-inspired hairdo coupled with cyborg armor. This means you can make some truly outrageous looks. Truly, truly, truly outrageous, I tell you! Getting some endings will take you six or seven hours, while others won’t take as long. If you want to see and do it all, Way of the Samurai 3 has plenty to offer with up to 40 hours of play time. Get ready for more open ended exploration in ancient Japan, because the way of the samurai is calling!