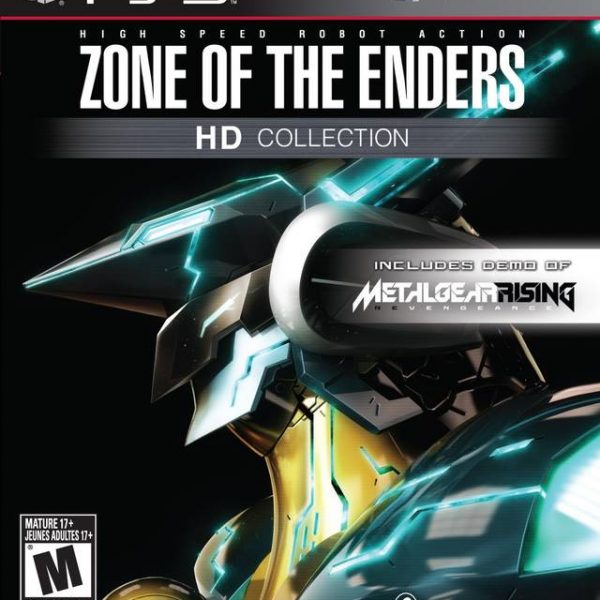 My experience with giant robots that make things explode, detonate and shatter is surprisingly limited. While trudging through the wordy but fascinating story of Xenogears, I was able to pilot Gears. The same can be said for the Xenosaga trilogy, except they were called AGWS and ES’. That’s about it, though. I dabbled here and there in Armored Core and watched shows like Evangaleon and Gundam Wing, but those may not count for much since the experiences were so limited. Thus, I went into the HD collection of Zone of the Enders not knowing what to expect. In the end, I got a fun, high-speed and action packed collection of two sleeper hits.

The world of Zone of the Enders takes place in our solar system in the far future. Humans have developed a living on Mars (finally), as well as in space colonies around Jupiter. With these new places to live, they developed LEVs, which are worker bots used for labor. Furthermore, on one of Jupiter’s moons, they have discovered an energy source called Metatron, which sounds like it came straight up from Transformers. Just kidding, Zone of the Enders is better than Transformers. Meanwhile on Earth, the people in high power positions are not happy with the way the space colonists have been advancing and decide to bring harsh taxes and laws upon them. These space colonists, now known as Enders, have risen up against Earth for a battle that will test the limits of their technology. Their greatest weapons are the Orbital Frames, giant robots with awesome abilities. The setting is something perfect for fans of both sci-fi and Japanese animation. Both of the games in the collection take place in an anime inspired final frontier.

The first game stars a whiny brat named Leo, who happens to find the Orbital Frame Jehuty by chance. Jehuty’s mainframe is controlled by the A.I. unit, ADA. Despite Leo’s aversion to violence and bloodshed, he becomes the runner (the term for an OF’s pilot) and attempts to rendezvous with the Space Force and return Jehuty. Leo, Jehuty, ADA and some villains make their return in the far superior sequel: Zone of the Enders: The 2nd Runner. The second game lets you control Jehuty once again, only this time the runner is Dingo Egret. Dingo once worked for an enemy organization, but now he pilots Jehuty to stop a man named Nohman from unleashing a destructive power on Earth. Jehuty’s sister craft, Anubis, is piloted by Nohman and is a key in stopping this aforementioned weapon. The first game is relatively short, and only hints at the possibilities of Jehuty, Anubis and other terms. The second game is a bit longer, has much more story content and wraps up the space saga nicely. Along the way, both Leo and Dingo meet some memorable friends and foes. The stories are not bad for a couple of action games, but the characters make them enjoyable. Despite my distaste for Leo, I like the plot for the first Zone of the Enders. The second game, however, is miles ahead and is reason enough to check out this collection.

Which brings me to the part everyone is probably the most interested in: the new HD look for two older PS2 games. During the actual game play, the graphics look crisp, sharp and polished the way they needed to be. As a newcomer to the series, I thought it was awesome seeing all of these giant, uniquely designed robots that flew around at supersonic speeds while blasting and slashing. One issue some folks (i.e. whiners) have said that there is a frame rate issue. Yeah, I don’t see it. But then again I’m new to the franchise so what do I know, right? Seriously, there was no slowdown, no jumbled pixels and no problems in any regard to the presentation. Sure, the movie events looked a bit dated in the first game, but they’re easy to forget about when you see the fantastic animation sequences in the second. Needless to say, this is a lovely HD collection and it shows.

But, like most HD collections, game playing is unchanged. Luckily, Zone of the Enders does not disappoint with copious high-speed robot action. For the most part, both games are the same. Jehuty has an arsenal of long-range weapons, a short-range beam sword, plenty of unique sub-weapons, and the ability to grab and throw enemies. Jehuty can use powerful burst attacks to break enemy shields and can lock onto targets with a homing laser. Like any good robot from the land of the rising sun, Jehuty is mobile, sleek and able to dash around enemies. Subtle differences you’ll notice between games include certain sub-weapons and throwing abilities. The icing on the cake is that Jehuty gains experience points for killing enemies and can level up.

Actual progression is very different in both games. In the first game, you can fly around a colony and enter various locations, all while listening to Leo’s moaning and groaning about puberty being difficult for him. The location needed to advance the story will usually be blinking, and you can participate in frustratingly difficult SOS Missions as well. The 2nd Runner plays more traditionally as an action game because it takes you from stage to stage, and throws animated sequences in the mix flawlessly. No matter what, you’ll be facing plenty of enemies and be in charge of making them go kersplode. With some extremely challenging and intimidating boss battles, multiple difficulty levels and a variety of bonuses, there is always something to look forward to doing in either game. No matter what game, what stage or what runner is in control of Jehuty, the action never stops.

A final note before ending this lengthy review. Well, actually two final notes. The first is that the music is great and the voice acting is mediocre. The second note is that, this being an HD collection for a modern day console, you can earn trophies for both games. I was able to achieve the platinum for both titles with a fair amount of difficulty. Despite this, I can see myself playing The 2nd Runner again to complete extra missions, try out different difficulty levels and to enjoy a neat two player fighting game. Zone of the Enders does a fair job of getting you geared up for The 2nd Runner, but it’s still a good title. The HD collection is worth owning just for Dingo’s quest, but you might as well deal with Leo’s wah-wah attitude while you’re at it. In the end, this is a wonderful collection of two sleeper hits. I recommend it to anyone looking for some white-knuckle button mashing with giant robots and plenty of explosions.