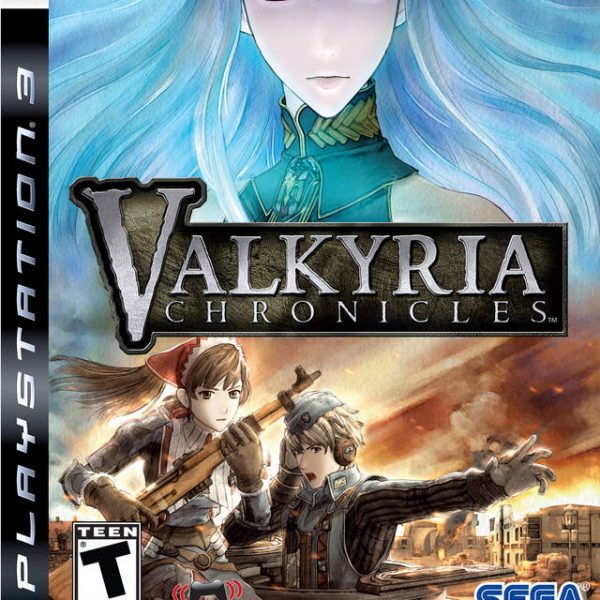 Author’s Note: This review was originally published on February 2nd, 2011. Like other reviews of the time, it features “witty” taglines for separating each section.

If you recall correctly, the Playstation 3 was originally priced at a whopping 600 dollars when it was first released. Not only that, but the launch titles were hardly anything to write home about. It took price drops, the release of a sleeker machine, and a better video game library to warrant my purchasing a PS3. I say that the wait was worth it because along with my console purchase I decided to pick up Sega’s RPG: Valkyria Chronicles. Playing this excellent game was a great way to welcome the new console.

All Quiet on the Gallian Front.
In the year EC 1935 in the land of Europa, The Empire began an aggressive assault towards the western lands in order to obtain a highly useful mineral called Ragnite. In response to the assault, The Atlantic Federation fought back with all of their might. Unfortunately, The Empire’s advances in technology slowly began to crush The Federation’s meager industry. Europan War II began as a result of these massive battles. In the middle of the battle is the principality of Gallia. While neutral in this mindless fighting, The Empire learned of rich Ragnite beneath their soil. In the middle of it all is Welkin Gunther and Alicia Melchiott. As they watch their city of Bruhl burn beneath enemy fire, they decide to join the Gallian Militia and put a stop to this war once and for all. They become a part of Gallian’s Squad 7, and theirs is a story of courage, power, friendship and proof that small numbers are capable of destroying a mighty empire.

Europa and EWII give nods to the events that happened in our world during WWII. In fact, concentration camps, racism, and diabolical rulers are all present in Valkyria Chronicles. The story does take a while to pick up pace and the ending was a bit over dramatic, but getting to that point with the well developed characters of Squad 7 and exciting events provides an excellent journey.

A Storybook Saga.
The way Valkyria Chronicles unfolds is a unique one. While you are in Book Mode, you view pieces of the story in a book by chapter. Certain episodes in the chapters are battles. You open new episodes and chapters by viewing/finishing the others in chronological order. Simple, but fun. Each chapter gives more information about the characters and story. There are also side stories you can access at certain points of the game that are the equivalent to side-quests.

Bringing up the tab menu with the triangle button will give you various options. The Glossary tab will help define terms used in the game. Choosing the Personnel tab will give more history and insight on the multiple characters in the story. The Weaponry tab will give the history and development of each of the weapons used in the game. As you progress through the game, more tabs will be unlocked. These nifty bonuses were a fun feature added to the game to give it more depth and history with the setting.

When you pick the Headquarters option, you will be taken to a new set of options. Here, you can chose which squad members you wish to take to battle, build new weapons, read the news, and visit a graveyard to pay your respects to fallen comrades. Most importantly, you can use the experience used in battle to level up your squad members. Your team levels up by class, not by character. So, if you level up one class, all of the members of that class gain the level. This is another cool new feature, and also saves you the worry about having under leveled party members. When you reach new levels, your team members will unlock new Potentials. These have a chance of taking effect in battle if certain conditions are fulfilled and when they do, characters are granted a boost in stats.

The amount of stuff to do to prepare for battle is wonderful. There is nothing more exciting than leveling up your characters and developing new and more powerful weapons. Not only is it fun, but it happens to be necessary. Valkyria Chronicles is a challenging title not only because of the enemies, but also because of the amount of stuff to keep in mind when battling.

Let’s Lock and Load.
After you get briefed on the situation, you will be able to place your units on the map. Each unit has a strength and weakness, allowing you to play as you see fit. Scouts can run far and perform excellent reconnaissance in order to uncover enemy troops. They have the most balanced build of the classes. Shocktroopers carry heavy machine guns and can decimate foes with their multiple bullets, but they are unable to run very far. Snipers have the worst running ability, but can one-hit KO enemies from far distances. Lancers use giant explosive devices in the shape of lances that can decimate tanks in one hit. Unfortunately, they lack accuracy and the ability to move far. Finally, Engineers have a variety of tools that allow them to defuse mines, repair your tanks, and restock Lancer and Sniper ammunition. The variety is there, but is the actual combat fun?

The battles flow in the typical player-turn, enemy-turn fashion. At the top of the screen you are presented with Command Points. When you run out of CP, your turn ends. Of course, you can end your turn early to have more CP available to you at the start of the next round. Usually, your objective is to kill an enemy leader, capture an enemy flag, or destroy an enemy tank. You do this by choosing a character that costs one CP, moving them forward in real-time combat, performing an action, and ending your turn. Your units can move as far as their energy bar near their HP let’s them. In other words, as you run through the battlefield, the bar drains. Once it empties, you cannot move. Also, you can only take one action per turn. This can be healing yourself, firing at a foe, or destroying an obstacle. Actually firing at a foe involves luck and distance. You have to ask yourself, do I run towards the foe and cause him to shoot at me or do I fire from a distance, thus lowering my accuracy. Aiming for the head will cause more damage, but will also cause accuracy to suffer. When you end that person’s turn, you are able to select him or her again if you like. Unfortunately, their energy bar will be much lower and they will be unable to move as far.

Most of the time, battles are challenging, but rewarding. Enemies will show your squad no mercy, but the right combination of troops will yield wonderful results. You have access to a mighty tank, but using it requires two CP. Welkin can issue orders to boost stats for a unit of the entire squad, but they also require CP to use. The more effective ones can cost up to six CP. Combat does feel a bit restrictive at first. For a game having third-person shooter elements, I expected a bit more options such as dodging and jumping. To achieve the highest rank, you have to accomplish the aforementioned goals in a certain number of turns. Earning an A rank grants you extra experience points and money. However, the challenge becomes exponentially larger if you wish to earn an A for every mission. If you make a mistake, chances are you will suffer. The positive side to this, however, is the fact that you can save at any time during the mission. If you miss a shot or make a wrong move, just reload and try again.

Battles can be frustrating at times, but when your shots connect and you end up winning a tough battle, the smile on your face will go from ear to ear. Trust me, it’s that rewarding. Having the ability to save at any time makes things a bit less stressful, too. The camera may cause a few problems at times, but usually it behaves well. A battle can last anywhere from 30 minutes to an hour. The mixture of strategy and third-person shooter, while restrictive at first, was a cool idea and works well for the most part.

War of Watercolors.
Upon starting the game, nearly everyone will be amazed by the unique visual style used for Valkyria Chronicles. The mixture of watercolor and 3D makes it feel as though you are playing an anime. The fluidity and color each character, setting, and object has truly is a sight to behold. The style may seem a bit out of place for a story about a world war, but it hardly matters. A fun thing about the graphics is the comic-book onomatopoeia that happens during battles. When something blows up, you will see the words “KA-BOOM” on the screen. When a tank moves, you will see the words “VRM VRM” appear underneath the treads. These little additions added some extra charm. Despite the technological advances with the strong presentation, there are virtually no loading times or frame rate issues. Aside from the battles and customization, the graphics in Valkyria Chronicles may be the game’s strongest attribute.

Stella Deus Part 2.
Anyone who has played Stella Deus will immediately recognize the similarities it has with Valkyria Chronicles in terms of music. Sakimoto is known for making awesome, orchestrated tunes. Valkyria Chronicles is no different, and this is definitely some of his best work. Even better is that the songs are not overbearing, despite the fact that you will more than likely be humming along to them. Accompanying the great music is excellent voice acting. No one is over the top, no one has an obnoxious voice, and no one’s actor/actress seems out of place. There is an option to play in the original Japanese voice acting, but for once, the English voice acting is better.

At the War’s End.
Valkyria Chronicles will take about 20 hours to finish. This can be increased by fighting for extra experience and money in skirmish battles, training your characters to the maximum level, trying to achieve the highest ranks in missions, and by tackling various side-stories. After the credits roll, you will have unlocked some fun extra content that will provide a decent challenge to any gamer. Thus, trying to get everything will probably last you a solid 40 to 50 hours of game time. Regardless of how long you play, Valkyria Chronicles was a wonderful title and a great game to accompany the purchase of my Playstation 3. Oddly enough, when I purchased my Playstation 2, I had a similar experience with Ephemeral Fantasia. The same can be said about Breath of Fire III along with the purchase of the original Playstation. Weird. Anyways, if you are an RPG player and looking for justification of buying a PS3, look no further than Valkyria Chronicles. If anything, it gives proof to the skeptics that the Playstation 3 is the console to watch out for because as more RPGs like Valkyria Chronicles get developed, it will once again prove that Sony’s system is the top choice of RPG players everywhere.