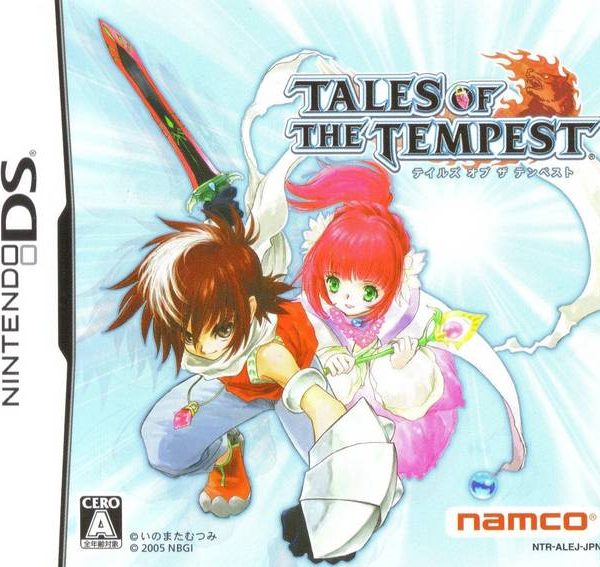 Author’s Note: This review was originally published on August 3rd, 2007.

When a new Tales game gets announced, I hope and pray to the video game Goddess that it will see an American release. Often times, my prayers are answered and I get to play a translated version of a game in my favorite series. Other times, I’m left wondering what could have been. Initially, Tales of the Tempest had me wondering on what I was missing. This DS title was never going to see the light of the USA, and that upset me. However, I ended up taking a chance and importing it due to its low price and translation guide. For once in my gamer life, I say that I’m glad we did not get this mess of a game. Not only does it put shame on the RPG genre, it gives Tales haters some legitimate ammunition. Tales of the Tempest is a Tale not worth playing.

The game starts off promising. You are treated to an opening movie that is accompanied by an enjoyable J-Pop song. Actually, most of the music in TotT is enjoyable. A dungeon track can get repetitive at times, but overall you have an above average sound track. Unlike the more recent Tales games, TotT has no spoken dialogue. The only time you will hear the voice acting is during battles. The rest of the sounds, especially the confirmation chime, can get quite annoying. Anyways, the opening J-Pop song that plays during the opening movie was catchy. However, this opening movie is not fully animated as they are in typical Tales games. This time around, you have a mixture of in-game graphics and anime. The anime is gorgeous, as expected. The in-game graphics? Not so much. They look a step below Playstation/N64 level visuals. Characters are blocky, and lack expression and emotion. The backgrounds are bland, have very little detail to the architecture, and the over-world map is nothing but a green mass with a few trees and lakes thrown in. While the environments do change from day to night, all you get is a change in color. The game would have excelled much better had it been presented in classic, 2D and 3D fashion.

Alright, as I have been saying, the game starts off promising with the opening movie. When you start a new game, you get introduced to the story and a few of the less than colorful characters. Caius Qualls and his best friend Rubia Natwick live in the quiet village of Fern. However, a wounded knight carrying an enigmatic crystal enters the village with a message to Caius’s father. Following the knight are vile creatures, never seen before in the area. When things get too hectic, Caius’s father transforms into a giant beast and destroys the demons. It turns out that he is a Lycanth, a race thought to be long extinct. The villagers fear the Lycanth race, and expel Caius and his father from the village.

Naturally, you may have questions. What is the knight’s deal? What is the mysterious crystal? Why are the Lycanth’s feared ever so much? You will get answers, but the story is so dry and uninspiring you will not care about them. The characters do little to advance the story forward, too. Caius and Rubia are character types I have seen countless times before. I usually wouldn’t mind this, but the Tales games are known for having colorful, interesting characters. Are they perfect? No, but in Tales of the Tempest they seem as though the creators recycled the prototypes for cookie-cutter RPG heroes. The same can be said for the villains and side characters.

However, if the characters cannot bring me to enjoy the game, the action packed battle system of the Tales series can, right? In regards to Tales of the Tempest, wrong. The DS control pad is not meant for this type of game. You can control any character you wish, but using Caius makes things less problematic. The battlefield is 3D, but you can only move left and right. Furthermore, the field is divided into three lines. As you move back and forth from line to line, you can attempt to get behind your enemy or attack your enemy while he/she is on a different line and their side is turned to you. Doing this causes extra damage. As per usual, you can create combos by chaining attacks, artes, and special artes together. You can also perform a guard break on your foes, or do a backwards dodge maneuver.

It sounds good on paper, but the execution was terribly flawed. Moving from line to line is not only clunky; it takes practice because of the DS control pad. You are unable to jump in this game, and enemies have a knack for surrounding you. Typically, I had Caius be in the middle line as he faced off against an enemy on the same line. The enemies would decide to hop on the bottom and/or top lines and pummel the living day-lights out of him. Tales games have had this before, but not nearly as much as in Tales of the Tempest. Your AI does little to help, too. You are unable to command them to unleash a spell or a skill, and their settings do little to make them advantageous. It is truly unfortunate that the battle system is so disastrous because it would’ve allowed me to overlook the shallow characters.

Outside of battle, you have to navigate through one of the worst interfaces I have ever seen. Menus are a pain, period. This not only applies to the main menu, but shopping as well. Cooking involves you using the stylus, similar to Cooking Mama. Walking around the towns and dungeons is tiring, due to the snail’s pace that Caius has. Oh, and there will be lots of world map traveling in this game. If the battles were fun, and not so random, it would not be a problem. But, that is not the case.

Completing this Tale will take about 15-20 hours. As far as I can tell, there are no side-quests or bonuses for completing the game. A grade shop may be available, but do not quote me on that. Obviously, I never finished the game. I was not only disappointed with it as a gamer, but I was disappointed with it as a Tales fan. I expected better from Namco who, for the most part, has given RPG players some wonderful titles. With Tales of Innocence in development for the Nintendo DS, I can only hope that the developers learn from their mistakes with Tales of the Tempest. Whether or not you are a Tales fan, stay away from this game and hope that another, better Tales title gets to see a USA release.