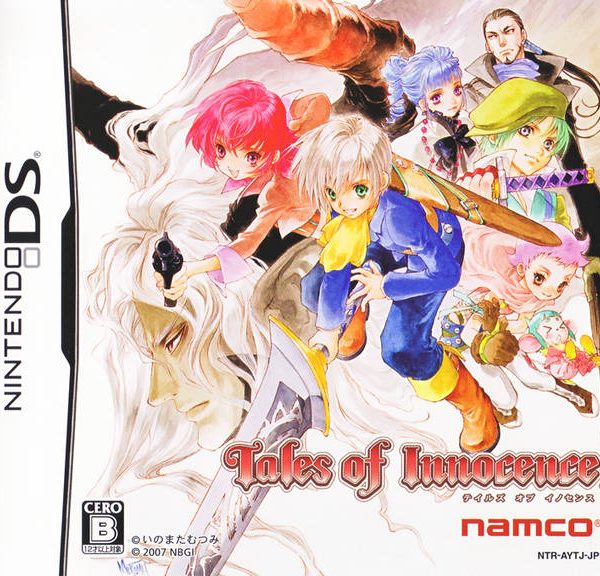 Gamers who have been fans of the Tales series for a long time know what it’s like to be let down. The process usually goes like this: a title gets announced, the people watch for any news about a localized release, the game gets released in Japan, and we are let down or decide to import. A vicious cycle, but one that we know all too well at this point. Luckily, not all of the games that don’t see the light of the USA have been winners. The most obvious example is Tales of the Tempest for the Nintendo DS. Tempest was a tragic, clunky game that most of us were fine with not getting. Thus, Namco had a lot to improve with Tales of Innocence. The second DS Tales title has made some improvements over TotT. Unfortunately, or fortunately depending on your POV, this is another Tales title that I am fine not owning in our native tongue.

I say we begin with things that remained, for the most part, unchanged: the graphics. The style in ToI is similar to the one in TotT. The only differences are some smoother polygons and a larger palette of color. They looked fine in TotT, and this is no different. At least the opening animation is fully animated this time. Inomata created unique looking characters yet again, as well as a setting that gives a nod to the wild west. The music in ToI doesn’t quite reflect the setting, but there’s a solid sounding soundtrack. The biggest improvement is the addition of much more voice acting. Skits are now fully voiced and there are times when the plot is voiced, too.

On the subject matter of the plot, I will say that the story is entertaining. It’s about a young boy named Ruca Milda. Some folks will say that his name is actually Luca, but those in the know will call him by his proper name. Ruca, usually timid and shy, has been having dreams about a powerful, overbearing god named Asura. During a normal walk through the town, he meets a young girl named Iria. Together, they fight against the evil Zeiram to bring peace back to the galaxy. No, actually, Ruca learns that Iria has been having similar dreams. It turns out that the dreams are actual memories of their past lives. As they meet more people who share similar experiences, they uncover powerful secrets about themselves and the world they live in. The titular theme of innocence reveals itself throughout the game as characters learn more about their divine pasts and how it effects their future. This was a fun story to watch unfold and the large cast provided plenty of entertainment from the start of the game.

Despite the enjoyable story, my biggest problem with Tales of Innocence is the battle system. This is unfortunate because Tales is known for having fast and fun battles. Named the Dimension Stride Linear Motion Battle System, Tales of Innocence plays similarly to Tales of Symphonia 2. You can freely move around the battlefield and you can perform a variety of moves in mid-air. One odd change they made was for you to pick up dropped money from defeated enemies. Aside from that, the battles are about the same as usual. As your fighting continues, you will build up a meter that will let you enter Awakening mode. This is ToI’s version of the Overlimit, and grants your characters plenty of bonuses. ToI also takes a page from Tales of Legendia. Hitting the two should buttons will allow you to enter Infinite Jam mode. This means that time will stop and you can really lay on the hurt. It all sounds SOP for a Tales game, but a huge problem with it is the difficulty. At one point in the game, you will face a rough difficulty spike and the only way to overcome this is to level grind or to perform guild tasks. Usually, grinding is fine in a Tales game. However, battles felt a bit off. Maybe it was just me, but the controls weren’t as responsive as I would have liked and none of the characters were very fun to use. For a main character, Ruca plays similarly to other sword wielders. However, he’s still kind of clumsy.

Luckily, it was better than the combat in Tales of the Tempest. Actually, everything about Tales of Innocence was better than Tales of the Temepst, and that is something worth noting. I feel like I’m beating a dead horse because this entire review has been about Tales of the Tempest vs. Tales of Innocence. I feel it is necessary to compare the two games because a lot of people who import might have high hopes and wishes for Innocence, considering that Tempest was such a flop. While it -IS- better, it still falls short in a variety of areas that make Tales titles so great. I say import it only if you are desperate to have another DS Tales title. Otherwise, I recommend looking into the Vita version of the game.