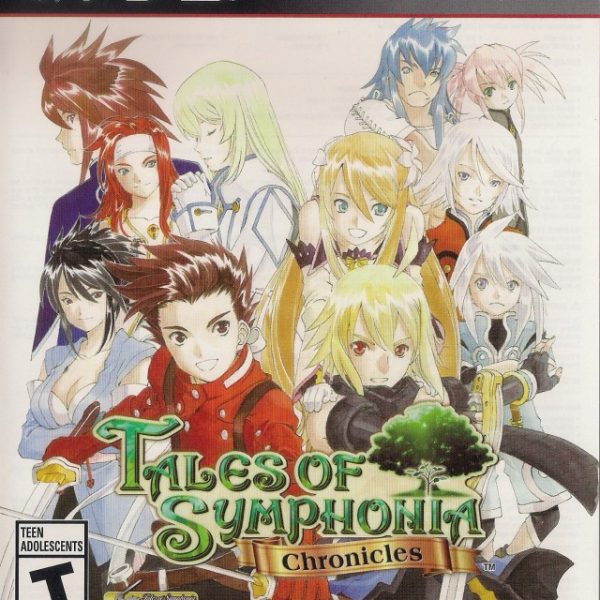 The summer of 2004 was one to remember. The air was clean, the sun was beaming and the living was easy. Best of all, North American Game Cube owners finally got to rejoice because not only did they get a new RPG, but they got one from my favorite series of all time. You know what I’m talking about, right? It’s Tales of Symphonia! Yes, Tales of Symphonia helped give this amazing RPG franchise a push in the right direction here in this fine country. Most people who owned DA’ CUBE were thrilled at the chance to actually play an RPG. However, folks like me who have been keeping up with the series since day one were even more thrilled. Tales of Symphonia is still regarded as one of the greatest video games of all time and my guess is everyone around the globe jumped for joy when they learned that it (and the inferior sequel that will be getting as little coverage as possible in this review) would be getting an HD port to the Playstation 3.

The months went by and eventually the port was released in stunning HD glory. However, notice the key word from that last sentence: port. The unfortunate thing about Tales sof Symphonia Chronicles is that nothing modern was added to either title. In the decade since Tales of Symphonia, we have seen many features added to series (and to the video game industry in general) that would have served this port well. While I will always recommend Tales of Symphonia to gamers far and wide, I hope that they realize what they’re getting into with this collection.

If you played the Game Cube version, then you’ll be reliving the exact same story with the exception of a few new scenes. Taking place many years before Tales of Phantasia, the world of Tales of Symphonia is set in Sylvarant. This dying world is relying on The Chosen of Mana to save it from running out of energy and from a nasty group of half-elves called Desians. The Chosen happens to be a young lass named Colette Brunell. Her best friend is our main character: Lloyd Irving. While a simple-minded dope, Lloyd is a likable dude with an unknown past. He, Colette and their many friends are about to embark on the journey of a lifetime across Sylvarant and beyond. The characters in ToS are a memorable bunch and its great to see them again. While the story is predictable, the realm of Symphonia really comes to life thanks to Lloyd, his friends and his enemies. It’s the same as before and still as enjoyable. As is typical with the Tales series, players get to witness a subpar story starring top-notch characters.

Exploration and battles are also the same. Despite not having as much “stuff” as something like Graces or Vesperia, everything retains the classic Tales formulae. Outside of battle, you can shop for goods, craft new gear, cook, and participate in huge selection of mini-games. Characters can earn Titles form these mini-games and let me be the first to tell you that earning them all is a monumental challenge. While some of the Titles are fun and engaging to earn, others will make you pull your hair out. Battles are where everyone will find the most enjoyment. The majority of the characters are fun to use, but I often times find myself sticking with Lloyd since he has the most options. Your party will run to and fro on the battle field in real-time as they create combos and chain attacks together to defeat a variety of enemies. Each character has a unique fighting style and learns their own set of skills and spells, called Artes. You can alter the type of Artes learned thanks to ability enhancers called EX Spheres. Combining EX Spheres unlocks passive and active skills for your characters. With eight characters and a huge variety of EX Spheres, there is always a way to build your perfect party.

Does this all sound familiar? It should. Remember, this is a port and not a remake. So, was anything changed? Obviously, the biggest change is the look. Tales of Symphonia looks fantastic in HD. The game looked polished and colorful on the Game Cube, but now it looks even better. With new anime scenes and character cut-ins during Mystic Artes, this game is very easy on the eyes. For the first time in the series, we can listen to the voiced scenes in either English or Japanese. The voice actors and actresses still delivers a solid performance in English, but the option to switch is a nice touch. Text boxes now appear at the end of the battle and narrate the victory quotes. Again, a nice touch and one you can turn off if you grow tired of them. The opening animation is the original, JPop song instead of that awful, orchestrated instrumental. Finally, seeing as the collection is on the Playstation 3, there are trophies to hunt. This will easily take well over 100 hours. While not difficult, the changes made from the Game Cube version include new items and Titles that require at least five files. Also, there is a trophy asking you to get a certain number of chips from a casino. The amount of rage this causes is through the roof.

But, that’s it. Tales of Symphonia is still over a decade old and would have benefited immensely with some modern touches. The biggest issue is that there is no option to skip story scenes. Dialogue will often times play out in a terribly slow pace. Thus, the lack of the option to skip over events is a huge con. In the first Tales of Symphonia on the GCN, there was no free-run. This port is no different. I cannot tell you how many times I found myself pressing a shoulder button to attempt to free-run. The skits aren’t voiced and are painful to get through. Finally, the GRADE shop is still as unforgiving as ever and it will likely turn people away from playing more than once. Like I said, this is a port and not a remake.

Since it’s part of Tales of Symphonia Chronicles, I guess I’ll mention Dawn of the New World. It also has a new HD look and dual-audio options. The rest of the game is the same including the level cap for the heroes and the monster collecting. I’m not a fan of Dawn of the New World, but it’s part of the collection so it should get a mention. Nearly everyone will agree that the main selling point of this collection is the chance to go down memory lane by replaying Tales of Symphonia in HD. But, one more time for the cheap seats in the back, this is not a remake. This is the same game with an updated look and a few new additions. Unfortunately, none of the additions are modern. That said, I can’t imagine fans of the Tales series turning down the chance to play one of the most memorable titles on an updated console. Just remember that, in doing so, you get the good, the bad and the ugly. Oh, and you also get Tales of Symphonia: Dawn of the New World.