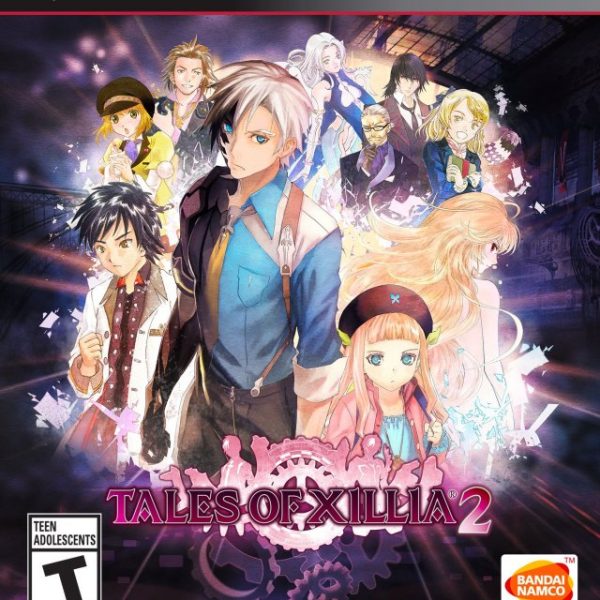 When I write a review, I like to give the game a score of 1 through 10. A 10/10 says, “Perfect on every level, couldn’t be any better.” This is how I feel about Tales of Xillia 2. With 50 hours of the game under my belt and many more to go, I feel that this is, indeed, a perfect game and I would not change a thing about it. After the first Tales of Xillia, I felt that there was room for more character development and world building. Tales of Xillia 2 fills in that void with plenty to offer. If you consider yourself a fan of the Tales series, you owe it to yourself to play Tales of Xillia 2.

It has been one year since the events of Tales of Xillia. Milla Maxwell has disappeared, Jude Mathis is busy researching Spyrites, and the rest of the cast has decided to pursue new ventures. Most importantly, the schism that divided Rieze Maxia and Elympios has vanished and the two worlds have joined. Our story begins in Trigelph, the capital of Elympios. The hero of Xillia 2 is a young man named Ludger Kresnik. Living with his older brother, Julius, and his chubby cat, Rollo, Ludger plans to join his brother as a member of the prominent Spirius Corporation. However, a faithful encounter with a young girl named Elle Marta changes Ludger’s plans and he begins an adventure across dimensions. With allies new and old, Ludger and Elle begin a new quest in a new world.

Ludger might be the main character of this story, but entire cast from Xillia joins him. For the first time in Tales history, the cast of a previous game joins you in an all new adventure. Actually, this sort of thing happened in Tales of Symphonia: Dawn of the New World, but not to this degree. Jude and Milla are back in full force along with Leia, Rowen, Elize and Alvin. To add even more variety, the king of Rieze Maxia, Gaius and the flighty yet focused spirit, Muzee join the team. As the main character, however, Ludger takes center stage. Despite the fact that he looks like an Express Model and is known as master chef, Ludger is a semi-silent protagonist. He might utter a few lines here or there, but the real fun comes when you decide what he says in dialogue sequences. By selecting the right responses, you can build friendships with the rest of the cast and earn rewards for doing so. Elle, the other main character, might not participate in battle, but she and Ludger develop a heart-warming friendship. Finally, Ludger meets some of the most conniving villains in Tales history. With a cast of familiar characters and new ones, the story in Tales of Xillia 2 will keep you going.

Of course, the best part of the game that will keep you going is the game play. Tales of Xillia 2 has lots of stuff to keep you busy, so I’ll try to make this section short and to the point. Divided into chapters, Xillia 2 lets you explore places to your heart’s content as you get further in the story. During one of the initial chapters, Ludger ends up in debt and needs to repay it by making monetary deposits. In doing so, he will be able to continue with the main story. The thought of this may turn you off, but the truth is that money is never a problem. You can buy the best items and gear while paying off your debt. Furthermore, with character missions, jobs, delivery requests, and Elite Monsters, you will end up earning a surplus of money. Xillia 2 also features the adorable Kitty Dispatch. By sending out cats that you find throughout the world, you can end up with rare items, attachments and weapons. The Kitty Dispatch is the perfect, simple diversion that will keep you entertained throughout the entire game. Finally, Xillia 2 removed the Lilium Orb in favor of Allium Orbs. Some may not enjoy it, but I welcome the change. For those who played Tales of the Abyss, Allium Orbs act the same way as Capacity Chambers. By assigning Allium Orbs to your characters, they will earn Elemental Ores after battle and in the field. These ores will allocate themselves depending on which elements are equipped and, as a result, skills and Artes will be learned and/or upgraded. Similar to previous Tales titles, a plethora of passive skills can be equipped to bring positive effects to battle.

Battles in Xillia 2 have remained unchanged for the most part. Each character can move freely around the field, chain together basic attacks and perform Artes. The AC is back and is used to determine how many actions a character can do. The unique abilities of each character have returned, as well. Linking with another character is just as vital as before because it adds new levels of strategy and it allows access to each character’s support ability. If you are with the right person and perform certain Artes, you will be able to hit another button to perform a devastating Linked Arte when the Link Gauge fills. The meter is divided into four sections. When it reaches the top, you can chain the Link Artes together for as well as perform a Mystic Arte. New Artes, Link Artes and Mystic Artes have been added to Xillia 2, but even bigger additions have been made.

Obviously, the new hero is the noteworthy addition. Ludger has the ability to fight with twin swords, a sledgehammer, and dual pistols. He can learn a variety of Artes with each weapon and switch between weapons in the middle of battle with the push of a button. Using the right weapon is vital to creating high numbered combos. Most enemies in Tales of Xillia 2 are susceptible to slashing, striking or piercing weaponry along with one of the six elements: wind, earth, fire, water, light and darkness. By exploiting weaknesses, even the toughest bosses can be pummeled into oblivion with a high number combo. Ludger has the unique ability to transform into a powerful figure when the Chromatus Gauge at the bottom of the screen fills up. Finally, Gaius and Muzee bring all new abilities to the roster. There is never a dull moment in Tales of Xillia 2’s battles, and with adjustable difficulty, gamers of any skill level can enjoy all that battles have to offer.

Tales of Xillia 2 looks fantastic. New areas to explore add to the variety, and you will able to visit all of the places you saw in the first game. Of course, the characters will gain access to new costumes, accessories and hair styles. If you have DLC data from the first game, you will be able to carry it over. Also, having save data from other Tales titles will unlock new costumes. The musical score has tracks from the first Xillia and new ones just for the sequel. All of the voice acting is as solid as before and, yes, Milla’s lisp is gone.

Tales of Xillia 2 can last you 50 hours, but with a variety of side-quests and secrets, you are looking at least 100 hours of game time. Trophy hunters will have lots of grinding to do in order to achieve a shiny platinum, but most of the work comes from battles. With a battle system I cannot get enough of, I know that this will be a fun platinum to obtain. Tales of Xillia 2 answered the crying fans that whined about the first Xillia lacking enough, “content.” Well, there is plenty of it and then some in the sequel. I recommend picking up Tales of Xillia 2 and enjoying all it offers. A perfect game in my eyes, Tales of Xillia 2 is proof that the Tales series will continue to persevere.