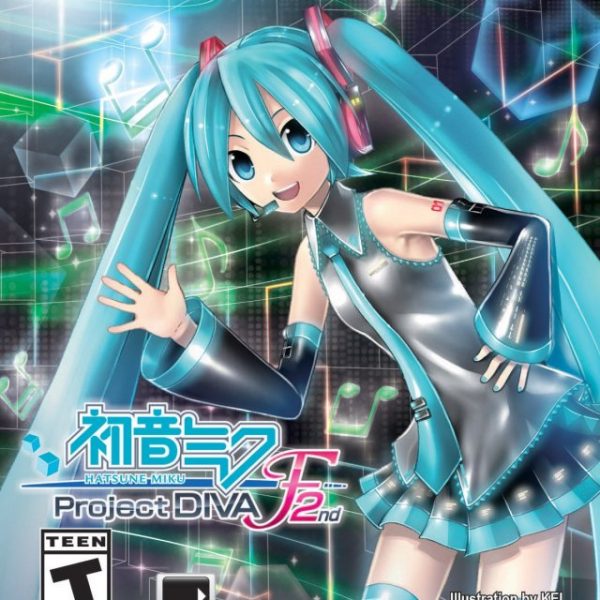 Welcome, vocal enthusiasts! The lovely Vocaloid Hatsune Miku is back with all of her lovely friends in another lovely musical game. Hatsune Miku Project Diva f 2nd is an excellent title that fans of J-Pop will eat up from start to finish. A variety of modes, 40 songs and the ability to customize your Vocaloids with even more accessories and outfits will provide you with plenty of hours of musical mayhem. Still, there are some issues with the title that should have been addressed from the first Project Diva f. A lack of some changes and the addition of others might cause frustration for those who wish to do it all. Despite these, if you enjoyed the first Project Diva f, there is no reason why you wouldn’t enjoy the second.

Like the first title, there isn’t a story mode. Still, each of the six Vocaloids that you met from the first game have returned and still retain their individuality. Kagamine Rin and Len are still youthful, energetic and sing songs that have equal shares of joy and sorrow. Megurine Luka still has that calm and cool demeanor, but some of her featured songs now involve more dancing and are more upbeat. Kaito, the older male Vocaloid with sapphire hair, participates in sophisticated songs that features more mature undertones. Meiko, my personal favorite, once again got the short end of the stick and participates in only two songs. One is with Kaito and the other is called, “Break It, Break It.” She is by herself in this epic, 1980s inspired power ballad. I feel it worth mentioning that her solo is my favorite song in the entire song list. Meiko is a sophisticated lady and she needs to be featured in more tunes, dammit. Finally, we have the featured lady Hatsune Miku. She’s as adorable as ever and watching her sing and dance will melt your heart in a splendid song list. If you buy the game new, you will also get to meet some extra Vocaloids like Neru. They don’t get any airtime, but they do give you a taste of what’s to come in the next Project Diva!

Let’s talk about this song list. As mentioned, there are 40 songs and, as expected, everyone will have an opinion on what is and is not a great track. For me, the majority of the songs are excellent. I already talked about my favorite being “Break It, Break It” but there are some other great ones worth mentioning. Classics such as “Melt” and “The World Is Mine” are as catchy as ever. “Luca Luca Night Fever” and “Miracle Paint” are also familiar tracks that will easily have you tapping your feet along with the song. Even the more melodic songs like “Thousand Year Solo” and “Soundless Voice” are catchy. But, as you would expect, there are some songs that feel either out of place or are downright annoying. One is called “Kagerou Craze.” I have no idea what this song is about, but the tempo and the video are all over the place. Another song that I would like to nix is “Paradichlorobenzene.” Now, I love chemistry. Heck, I love anything that has to do with science. But, seeing Kagamine Len singing this polymer and stating that he has no idea what it is makes for an awkward song. I’m sure there’s some darker meaning behind it and if you are reading this and know what it is, feel free to correct me. There are a few other songs, but the good thing is that none of them are as bad as “Rin Chan Now” or “Sadistic Music Factory.” The bottom line is that there will definitely be a track for everyone because the song list features all genres of music.

Actually playing these songs will require you to match the button presses on the screen as they fly at you from all directions. If you played the first game, you know what to expect. Star icons require you to swipe the Vita screen, but since I hate doing that I changed the option to flicking star icons with the analogue sticks. Some star icons will require you to swipe with two fingers or, in my case, flick both sticks. Songs have four difficulty levels: Easy, Normal, Hard and Extreme. Thus, Project Diva f 2nd is easy to pick up and play for new players, but will provide plenty of challenge for those that wish to earn a coveted perfect on every song on every mode. Finishing a song will earn you Diva Points which you can use to buy new outfits and accessories for the Vocaloids. To actually unlock the ability to buy these, however, you will have to go through a gargantuan variety of challenges.

Each song consists of five to six things to unlock. These can range anywhere from clearing the song five times to earning a cumulative high score that could range in the millions. As you can imagine, completing all of the songs will be a true test of endurance. Since a good variety of the unlockables need to be used in the Diva Rooms, you will be spending plenty of time playing the same song over and over until you unlock everything. If you don’t care about earning all of the trophies, then participating in these challenges won’t impact your playing. However, for folks like me that enjoy doing it all, you will be faced with at least 40 hours of grinding due to the insane requirements of certain songs.

However, even for people who are good at games like this, the challenges can be a problem. Just like the first PDF, the screen can get really busy with all of the flashing lights, crazy backgrounds and the over the top choreography done by the Vocaloids. It’s a good thing that the game brought back the Diva Room feature so you can take a break from the madness. Once again, you can visit the six Vocaloids (and the extra DLC Vocaloids) and interact with them. Giving presents and rubbing heads will increase their affection towards you, which ultimately results in you getting the chance to earn even more items. Trophy hunters will be sad to learn that you need to view all of the events available in order to earn a shiny and new platinum. Much to my chagrin, the sketchbook is back.

But, no matter what you are doing, one thing is for sure: this game looks gorgeous. While I’m sure the PlayStation 3 version looks great, the Vita version surpasses my expectations with its clarity and crispness. Now you can take Miku and the crew with you wherever you go and show them off. With so many ways to customize the characters and wonderful music videos, there is no denying that this is a stunning looking game.

As much as I enjoy the game, I still have to grade it with a 7/10. The lack of variety offered by the challenges, the lack of a practice mode and the fact that the Diva Room barely got touched shows that the developers decided to focus more on increasing the longevity of the game. Unfortunately, they did so in the wrong way. Remember, games like this are perfect to just pick up and play. Even after someone does it all, they will easily go back and replay their favorite songs again. In the event of a third installment, I hope that the right changes are implemented. Still, Hatsune Miku: Project Diva f 2nd is a fun game that fans of J-Pop, Vocaloids, music and any combination of the three will easily enjoy for hours on end. I highly recommend getting the Vita version so you can take Miku and her pals with you on the go.