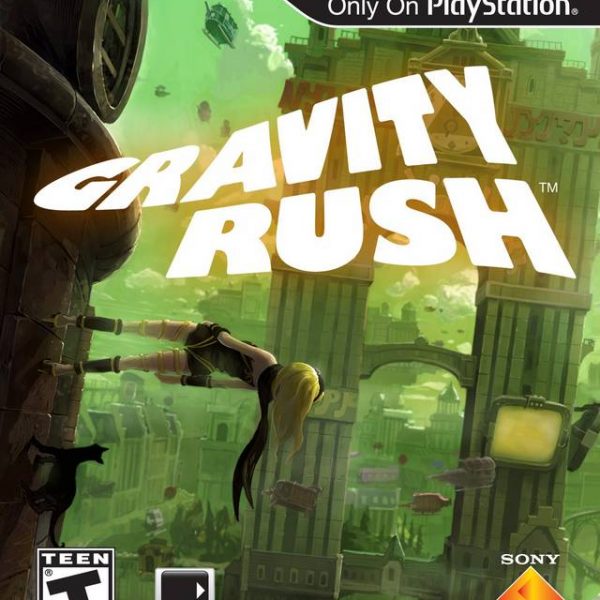 After the disappointing Shinobido 2, I was fortunate enough to obtain a free copy of Gravity Rush. I’m glad that it was free because I would have felt robbed if I decided to use my hard-earned money to purchase this title. Now, I have to give credit where credit is due: this is a very unique game. Unfortunately, unique doesn’t always equate to quality. While interesting in theory and starring a fun protagonist, Gravity Rush ends up being a frustrating action game that relies too much on a feature that ended up making me so dizzy that I had to turn the Vita off and get outside for some fresh air.

I did mention that the protagonist was fun, so let’s begin with the story. Gravity Rush is about a girl named Kat who lost her memories. Kat runs into a black cat that grants her the power to control gravity at will. With her new found power, she begins a mission to recover her memories and to stop the menacing Nevi from taking over the town of Hekseville. Kat is a trip; she’s sarcastic and snappy but always wants to do the right thing. I was always rooting for her. The people she meets had more depth than I thought they would considering Gravity Rush is more focused on action and exploration.

The story plays out in a comic book format. Character art takes a page from the realm of anime, and as the dialogue sequences unfold you will see some expressive artwork. In fact, this is one of the most gorgeous games I have ever seen on a handheld. Hekseville and the inhabitants within are designed with an aesthetic that is ripe with originality. Despite the town being rather dismal and steampunk inspired, the details make it stand out. Kat moves as gracefully as a ballerina dancing on air, which brings me to the next portion of the review.

With the ability to control gravity, there is no surprise that Kat will need to be airborne frequently. Whether it’s exploring the large town or fighting enemies, manipulating gravity is essential. Kat is already nimble enough to jump, dodge and dash. Her main method of attacking is by soaring into an enemy with a kick. However, being able to literally dance around the sky and hurl objects with enough force to knock down a gigantic boss makes her a force to be reckoned with. Manipulating gravity is done with the push of a button. This, and other abilities acquired throughout the game, can be leveled up with gems collected throughout the town. There are also side-quests, time trials and hidden bosses that let Kat put her gravity abilities to the test. By the end of the quest, Kat has an arsenal of skills that utilize her gravity manipulation to the fullest.

Gravity Rush sounds like a game that makes the Vita worth owning based on all I wrote, so why the 6/10 score? Well, this game is not for me. When things get intense and you’re running on ceilings and turning 180 degrees and trying to aim carefully and twisting through the clouds and so on, you might be like me and end up getting nauseous. Tilting the Vita could add another level of nausea. The bottom line is that this game is not for me at all, thus it only deserves a 6/10. Now, keep in mind that I can ride rollercoasters and have been on cruise ships. Those have never made me feel ill, but focusing on a handheld screen in a fast-paced, topsy-turvy game like this did. Like I said in the introduction, Gravity Rush is one of the most unique games I have played. Perhaps you will have a better experience with it than me. There is some great stuff going for it, but I couldn’t play it the way it was meant to be played without needing to shut my eyes and shut off my Vita in order to stop the room from spinning. Gravity Rush gave me a rush, but not the kind that was intended.