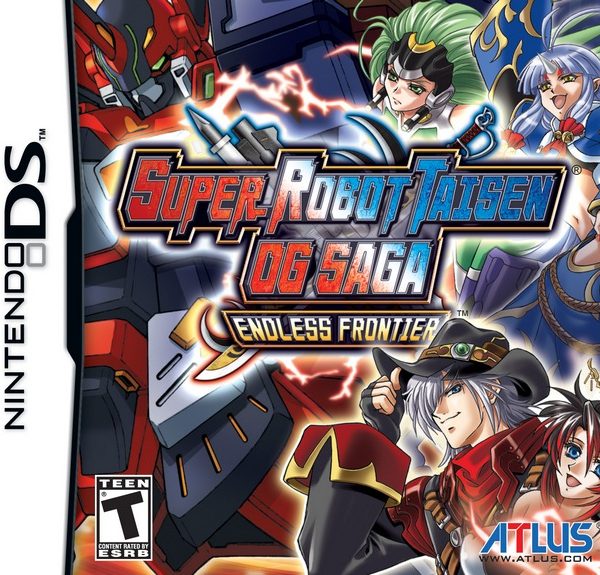 Boobs! Big ones! Small ones! Some as big as your head! Er…I mean, welcome dear readers to another review by me. In this review, we’ll be focusing on the second title I checked out due to seeing characters from the excellent cross-over title known as Project X Zone. That’s right, this review is on Super Robot Taisen OG Saga Mansion of Pancakes and Cottage Cheese Symphonic Hippopotamus: Endless Title. In all seriousness, the game is called Super Robot Taisen OG Saga: Endless Frontier. While it appears to be a typical RPG on the surface, this is one of those rare gems of a game that is packed full of quality, breasts, and quality breasts.

Before reading further, you should probably take a look at a picture of the game’s cover. Yes, there are some very well endowed females in this game. If you are the type who gets offended at juvenile humor regarding a woman’s cleavage, then this game may not be for you. That would be a shame, because the writing is one of the strongest aspects of the game. Missing out on a story due to being upset by motorboat talk means you don’t get introduced to Haken Browning and his bi-polar android partner, Aschen Brodel. These two bounty hunters were pursuing their fortunes on Lost Herenica, which is a country that is part of the Endless Frontier. They were on a wrecked ship when they end up meeting a napping princess named Kaguya. The three of them decide to go on adventures together that takes them across various dimensions due to unstable entities known as Cross Gates. Also, they were charged with the duty of learning why mysterious, red crystals have appeared across the worlds.

From the get-go, it’s easy to see how much care was given to the script. Haken was a debonair smarty-pants, Aschen’s bipolar tendencies caused her to be the voice of reason or a total whack-job, and Kaguya was na&iuml;ve about life and her looks. Their interactions were laugh-out-loud funny, and there was also a sense of wondering due to their world being so unique. If that wasn’t enough, the instruction manual was narrated by Haken. Haken, Aschen and Kaguya weren’t going alone on their journey. Another original character from the game was named Princess Suzuka. I’ll be the first to say that she was hilarious and I want her to be a real person/demon-thing so the two of us can hang out a local bar with a patio and throw shade at innocent bystanders. The rest of the crew came from different worlds (i.e. games) that you may recognize. From Namco X Capcom, Reiji Arisu and Xiamou joined the team. Finally, from the Xenosaga series, everyone’s favorite blue-haired android was ready for action. Of course, I’m talking about KOS-MOS. The characters both new and old; hero and villain; busty and flat, were all excellent. They also looked excellent. Despite the small sprites used during exploration, the characters were realistically styled and proportioned (and I use the term “proportioned” loosely) during battle. Each character moved differently, effortlessly and handled their weaponry like a pro. The best part is that they all have such a unique design that brings them more individuality. I’m sure many of you readers will enjoy the graphics due to all of the…plot. Yes, there is so much plot to see.

Ahem…Exploration is simple in OG Saga. Haken got moved through a world map and various dungeons. He could open treasures, break rocks with his weapon to reveal more treasures, and solve simple puzzles. Towns were simpler; just select where you want to go and you’ll be there. The choices usually included a shop, an inn and some part of the town that leads to a story event. This was a real shame. With all of the excellent writing, it would have been great to see Haken and his posse of pretty ladies (and Reiji) interact with some NPCs. Aside from a fantastic localization, battles were the best part of OG Saga. Similar to games like Valkyrie Profile, OG Saga used a unique and fun turn-based system for slaughtering your enemies. When one of your character’s turns is up, you could use as many skills and items as you like as long as you had enough SP and COM, respectively. The real fun begins with an attack. Attack commands are pre-set in the main menu (up to five per character) and are issued with the push of the A button. By continuing to press the A button, the attack string continues. Essentially, this means that you could continue to juggle your foe until your attacker is out of COM. As you chain attacks together, you can call for support from the back row and/or summon the next person in the turn sequence to carry on the attack. As is typical for the genre, a meter slowly builds up as you damage is given and received. Once at maximum, you can use an extremely powerful attack. Battles are fun, but there are also some problems with them. A minor issue is that they are random and can often times drag due to the enemy’s HP being almost too high. Also, those above mentioned special attacks had long animations that cannot be skipped. Watching it the first time was a sight to behold. Watching it the eleventy-hundredth time added on unnecessary minutes to the battle.

My biggest complaint, however, has to do with the voice acting. Most of it took place on the battlefield. Unfortunately, it was in Japanese. This means that most people would have no clue what the characters were saying when entering a battle, during a battle and/or after a battle. Personally, I have some understanding of the language and caught a few phrases here and there. Still, due to them speaking at conversation level speed, it would have been a huge benefit if Atlus somehow added translations. The music was fantastic in OG Saga. While there weren’t many tracks, they were composed well. If you are lucky enough to find this brand new, chances are you’ll get treated to a bonus soundtrack full of the music from the game.

Once again, I have to thank Project X Zone for making me aware of this title. I really wish that I had the chance to play it sooner, though. Due to a limited print run, Super Robot Taisen OG Saga: Endless Frontier is a rare find. If you find it in a store (and are interested in it based on what I wrote), then I suggest picking it up and not letting it go. Otherwise, you’ll have to hunt for it online. The prices are high, so this is another one of those games that makes a great gift. Is the price of admission worth it? I would say yes because the game is quite enjoyable. Thanks to a wonderful translation and an exciting battle system, OG Saga is a great RPG for your DS. My issues with long-animations and lack of town exploration can be overlooked due to the rest of the game being such a delight. Thanks for reading, and be sure to be on the look out for my next review about a game that I learned about thanks to Project X Zone. Until then, keep calm and stay busty!