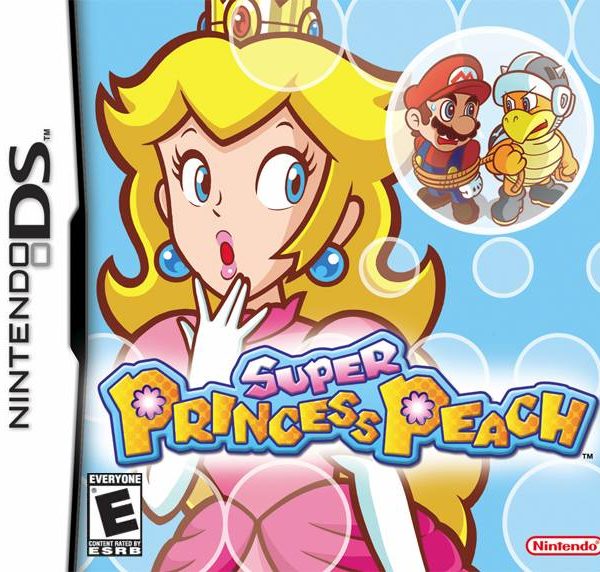 A few hours before I started Super Princess Peach, a friend of mine told me to set my expectations low due to the game’s lack of a challenge. Having just finished a brutally difficult game prior to starting it up, Super Princess Peach sounded like the perfect game. Indeed, Super Princess Peach is one of the easiest game I have ever played. It also has ridiculous writing and a forgettable soundtrack. However, the experience was still an enjoyable one, and it’s one that I recommend to all gamers of all experience levels.

Super Princess Peach takes place on Vibe Island, a popular vacation spot located near the Mushroom Kingdom. While exploring Vibe Island, Bowser finds the Vibe Scepter. Contrary to its adult innuendo name, the Vibe Scepter is able to control the emotions of everyone on Vibe Island. With its power, Bowser captures Mario, Luigi and the Toads. It’s up to Peach and her new friend Perry, a talking umbrella, to rescue everyone and put a stop to Bowser’s plans.

Most of you reading this already know that Princess Peach is more than capable of handling herself. We have seen her in Super Mario Bros. 2, Smash Bros. Melee, Super Mario RPG: Legend of the Seven Stars and more. However, Super Princess Peach is focused solely on Nintendo’s starlet in game that breaks glass ceilings and proves that women are just as capable as men when it comes to saving the day. It took Nintendo a long time to finally give Peach a chance to shine the way she deserves, but here she is. The story is fun and carefree, but the translation is spotty during most of the cut scenes. It doesn’t take away from understanding the plot, but the bizarre translation seems out of place for a game that usually has entertaining dialogue.

The majority of the game is spent exploring various areas of Vibe Island, each having its own levels. Most stages play similarly. You will guide Peach as she travels through dangerous terrain, bopping enemies to death with her umbrella, rescuing Toads in each level, and solving simple puzzles to proceed. Some areas will turn Perry into a submarine. Others will turn Perry into a ski lift. Peach is a durable woman; she can take a fair amount of hits before being sent back to a check point. There are no “lives” in Super Princess Peach, so you don’t have to fear about getting a game over. With her umbrella, nearly every enemy can be defeated. She can jump on some enemies, but where’s the fun in that when you can give them a visceral whack?

Peach’s most important tool at her disposal is her ability to tap into four emotions, which are represented by colored hearts on the touch screen of the DS. Underneath her health is the Emotion Meter. This can be filled up by collecting crystals or by having Perry swallow enemies. With the use of the stylus, you can change Peach’s emotions at will. The yellow heart represents joy. This allows Peach to fly and create gusts of wind to use in puzzle solving. The red hearts represents rage. This turns Peach into a fiery, rage-filled woman that can set things ablaze and melt certain structures. The blue heart represents sadness. Peach will cry gallons of tears and run at a brisk pace when she taps into this emotion. Her running speed lets her bypass certain obstacles, and the water can be used to put out fires or grow plants. Finally, the green heart represents calmness. This lets her recover her energy. Her health will continue to recover until it’s at full or she receives a hit from an enemy or damaging obstacle. This last one is worth pointing out because it contributes to Super Princess Peach’s lack of difficulty. Since enemies are plentiful, the Emotion Meter can always be filled up. As a result, Peach rarely is in any danger of losing all of her life. And again, if that does happen, you just begin at the last check point.

Indeed, Super Princess Peach is a simple title. Even without her emotions, Peach’s umbrella packs a punch. Each stage is littered with coins that can be used to buy upgrades for both Peach and for Perry. Peach can buy items to increase both her health and the Emotion Meter. Perry can be upgraded to create earthquakes, shoot bullets, give Peach the ability to float, and more. The secrets in the stage are easy to find, there is always an explanation on how to defeat each world’s boss, and the mini-games that come before the boss battles don’t require you to have quick reflexes or precise timing. However, that doesn’t stop the game from being fun and rewarding. Sure, a level won’t require multiple tries, but there is still a good sense of satisfaction that comes with rescuing each Toad or finding a secret item. Like other games in the Mario-verse, it’s exciting to enter a stage for the first time to see what’s in store.

Adding to this excitement is seeing what the new stage will look like. Super Princess Peach is an adorable looking game, rivaling the likes of a Kirby or Yoshi title. Many of the classic enemies have returned, but they show the effects of the Vibe Scepter. You’ll see crying Goombas, angry Para-Troopers, happy Bob-ombs and much more. The bosses are well animated and take up a large chunk of the screen. Watching Princess Peach change her mood both on the top and bottom screen is always entertaining. It’s a shame that the music isn’t as memorable as previous Mario titles. None of the tunes are worth a listen outside of the game. In fact, I would have listened to other music if not for Peach’s adorable voice acting. I expected more in this department. One thing that shouldn’t have been included was the non-stop beeping noise that begins when Peach’s health gets low. I have always hated it when games implement this, and Super Princess Peach is no exception.

Most people will be able to finish Super Princess Peach in about six to seven hours. However, there are plenty of mini-games and extras to keep you playing after Peach’s mission is over. Hopefully, this isn’t the last time we see a title starring this lovely princess. She was a fan favorite Super Mario Bros. 2 due to her ability to gracefully glide across the various stages. She played the role of healer in Super Mario RPG. She has been known to be an aerial force of destruction in Smash Bros. However, in all of those games, she has had to share the spotlight with other characters. For the first time, we get to see Peach as the leading character. I think that’s reason enough for everyone to check out this title. Super Princess Peach gives gamers a platforming experience that doesn’t require precise timing. However, I don’t see that as a bad thing. Hopefully this isn’t the last time we get to see Peach take the lead.

Overall, 7/10: Super Princess Peach is simple, short and straightforward. However, none of it’s issues prevent it from being enjoyable.