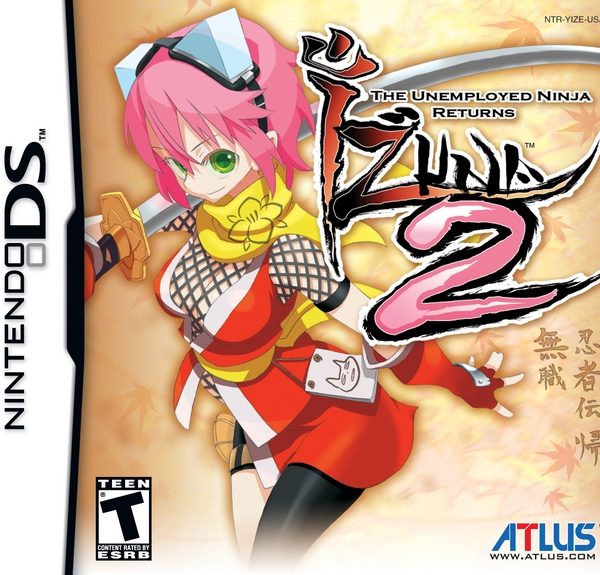 Izuna’s new adventure takes place after the events of her first. The game does a good job of recapping what happened, so you don’t have to worry about being too familiar with Izuna: Legend of the Unemployed Ninja. Izuna and her friends head to a fishing village to attend a wedding. After the wedding festivities end, Izuna’s best friend Shino disappears. Izuna and Shino reunite, but Shino informs Izuna that she wants to embark on a new, personal journey in order to find Shino’s sister, Shizune. Izuna is on board. The story is bit more serious than this time, but you can expect the same level of creative, clever writing that is filled with puns, humor, and sarcasm. Izuna and her friends are always ready with a quip or a comment that got faithfully localized for a North American audience. Similarly, the various enemies she meets have their own personality and attitude. For a rogue-like, there is quite a bit of development.

Before heading to a dungeon, you can spend time in towns chatting with NPCs, putting things in and taking things out of storage, or make a purchase. Naturally, most of your time will be spent in dungeons with ever-changing floors and hordes of monsters. At first, Izuna will be flying solo. When she acts, the enemies acts. During each of her turns, she will recover some HP. However, below her HP bar is the SP bar. The higher this second bar, the more powerful her attacks. The catch is that her SP bar is constantly depleting. So, you will need to find some sort of balancing act between acting, using a turn to recover HP, and using a turn to recover SP. There are items littered throughout the dungeons such as armor, weapons, items and scrolls. Izuna can equip a variety of gear, many of which can be adorned with scrolls for added benefits. At the same time, adding too many scrolls can cause a weapon or armor to crumble after too many uses. Again, it’s important to find the right balance. Throw in a few traps and some exceptionally powerful bosses, and by now, you should realize that Izuna 2 is a challenging title.

Luckily, it’s more forgiving than her first adventure. While Izuna will still lose all of her money and items upon defeat, she retains all of her experience points. So, if things aren’t looking good, you can grind for experience in your favorite dungeon. The most important new feature is one that helps make Izuna 2 more accessible: a tag team system. After the initial areas, Izuna can bring a friend along with her to the dungeon. There are plenty of colorful faces to bring along, each one with their own types of equipment, strengths and weaknesses. This makes it fun to experiment. As you explore the dungeons, you can swap characters after enough turns have passed. Most importantly, the partner allows for you to perform an attack against all enemies on the screen for some very high damage. This tag team attack is a real life saver.

With the exception of some flashy anime stills from the above mentioned duo attacks, the graphics in Izuna 2 look the same as before. In other words, they’re lovely. The 2D presentation is as vivid as can be and filled with a variety of sprites and special effects. Monsters come in a variety of mythological shapes and sizes. Despite their somewhat adorable appearance, they’re all out to get you. On the audio side of things, Izuna 2 has the same style as before, too. The simple yet traditional sounds of ancient Japanese tunes mixes perfectly with the setting. All of the characters will play voice clips during attacks, the start of conversations, and key events. The game’s voiced entirely in Japanese; a good choice due to the game’s setting.

Izuna 2: The Unemployed Ninja Returns has a short but sweet campaign. Despite all of the retries and game overs, the game can be cleared between 10 to 15 hours. Those that wish to complete a photography album will increase their game time. At times, Izuna 2 will feel longer due to the need to retry certain dungeons or level-build a second teammate. Izuna 2 is a definite improvement from the original, but it’s still not a game for everyone. Games with the “roguelike” characteristic take a level of patience to finish. You need to expect the worst, because the worst will happen to you quite often. Even with Izuna’s partner and improved level building, Izuna 2 can be a frustrating adventure. Still, with all of the clever writing, catchy music, and rewarding boss fights, fans of this niche genre will enjoy everything Izuna 2: The Unemployed Ninja Returns serves.