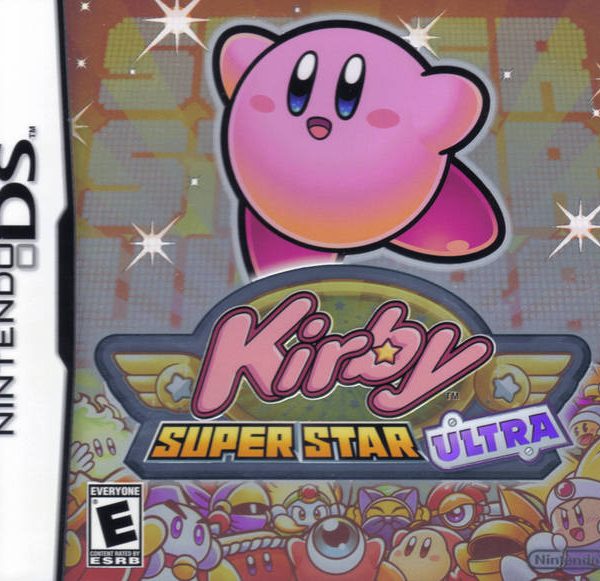 Author’s Note: This review was originally published on January 5th, 2009. Like other reviews at the time, I separated the sections with “witty” taglines. I remember exchanging a game that stopped working for Super Star Ultra. I was bummed at first since I really wanted to play the first game, but it turned out for the better in the end. I mean, come on. It’s Kirby.

Near the end of the SNES era, the system got hit with some excellent titles. One of these was none other than Kirby Super Star. This gem of a game had eight little games featuring everyone’s favorite ball of pink, Kirby. It also pushed the graphic capabilities of the SNES to the max. Now, the DS was hit with a title of the same name. The only difference now is that there are new games add onto the original eight. This makes Kirby Super Star Ultra a must have for any fan of Kirby, or any fan of simple games to quickly pass the time.

Puffed To The Max!
When you begin this game, you are presented with the cork board. You can chose from only a few games at the start, but as you complete these few game you unlock more. In the end, you are presented with a variety of fun titles featuring Kirby. The first game is Spring Breeze, which is basically a remake of Kirby’s Dream Land for the Game Boy. Next, we have Dyna Blade, where Kirby must stop a giant bird from destroying the crops. Kirby’s lamest adventure is the Great Cave Offensive, where he must find a variety of treasures in a mysterious, underground cavern. After that, there is Revenge of Meta Knight. It is up to Kirby to stop Meta Knight from taking over all of Pop Star. The last game you will recognize if you played the SNES title is Milk Way Wishes, in which Kirby must receive the power of a mighty comet to stop the sun and moon from fighting. Other games include a food gathering/racing game against King DeDeDe, and an Arena where you face off against all of the bosses in the game with limited healing items.

But, the fun does not stop there. Besides new, touch screen implemented mini-games, there is an enhanced Arena, an Arena strictly for the Helper characters, a quest that allows you to go through Spring Breeze on higher difficulty, and a quest where you get to control Meta Knight! Needless to say, there is plenty of fun to be had when you pick up this game. Just when you think the game is over, the game is just beginning. Besides the games, there are a few bonuses like movies, music, and the original mini-games found on the SNES version.

Regardless of which game you play, the premise remains the same for the most part. Other than a few quests, Kirby will fly, slide, swim, and spit out enemies. Kirby can also copy the abilities of certain foes. There are plenty of abilities to copy, but the sad thing is that there are new abilities added. Luckily, abilities like the wing, beam, sword, cutter, stone, hammer, fire, ice, wheel, jet, plasma, cook, and paint (just to name a few of his abilities) will keep you occupied. Each ability can do a variety of things, which is exciting. For instance, the beam ability gives Kirby a beam whip, a charged beam wave, a beam shower in the air, a beam spiral attack, and the ability to pick and throw enemies with the beam. Kirby can create a Helper to assist him in his adventures, but this is only fun if you have a second player control the Helper. The majority of these quests are easy without a second player. Using the second player can help substantially in the Arena, however.

So Freakin’ Cute!
Kirby Super Star Ultra looks great on the Nintendo DS. Kirby is as adorable as always, as are most of his enemies. Kirby will travel through icy areas, water areas, desert areas, forest areas, and other areas that show off a plethora of color. New to the DS version are gorgeous CGI movies. The music and sound are the same as they were on the SNES. This is by no means a bad thing, seeing as Kirby and crew have had little experience in the voice acting world. Like the graphics, the sound and music are ever-so adorable.

We’ll All Float On And On…
Despite the variety of games available in the little cartridge, Kirby Super Star Ultra is a very short game. You can easily beat it in one rental period. However, the game is a classic reborn and should be bought. The excellent replay value will easily make you come back for more after you achieve 100 percent. Kirby Super Star Ultra is a must have for any fan of Kirby.