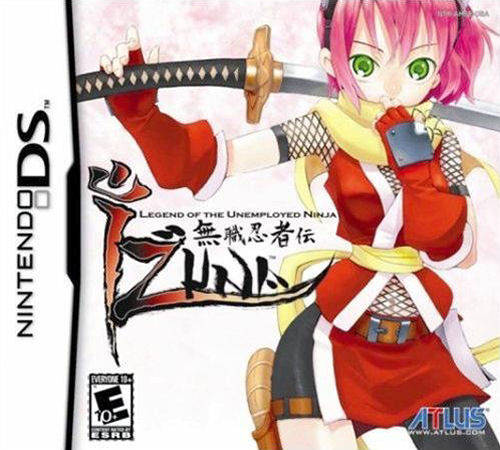 Author’s Note: This review was originally published on March 26th, 2007. I tried my hardest to be clever and witty in the writing with this review, but it fell short. I think I was trying to mask some of the personal strife I was going through around the time.

When I see box art featuring a ninja with pink hair, I have no choice but to learn more about the game. This is what happened with Izuna: Legend of the Unemployed Ninja. I heard many negative things about this so-called Rougelike dungeon crawler, but I thought, “To hell with it…I’m going to give it a shot!” I might as well have shot myself in the foot after picking this game up. It’s not that the game is hard, it’s that the game wants to do anything and everything in it’s power to screw you over.

However, before we get to that, let us talk about what Izuna actually is all about. This is a story of a ninja, named Izuna, and her friends as they happen upon a rather remote village. After being kicked out of the city, they needed to find a new place of residence. While wandering around, Izuna finds a sacred crystal and decides to snatch it into her pocket. This causes everyone in the village to act strangely, for that crystal was what kept the gods of the village in check. Now, everyone is cursed and only Izuna can go into their layers and remove the curse.

The goal of the game is simple. Go to the god’s dungeon, beat the god, obtain his/her crystal, use it on a villager or two to remove their curse, and then start the new dungeon. This is what you do for the whole game, and the story remains basically unchanged. Luckily, this game was treated with a wonderful translation, full of hilarious dialogue. Each villager has something new to say after you complete the dungeon, and watching Izuna interact with them is great. Izuna herself is funny. Even the instruction manual is funny! Gorgeous character portraits accompany the conversation boxes. If Izuna isn’t happy, she has no qualms about putting a gun to her head to make things go her way. I sometimes wonder if she was modeled after me…

Anyways, with the mentioning of character portraits, I should move to the next issue: graphics. Overall, I found the 2D sprites to be perfect for this game. The dungeons are bland, but the town is the opposite. There are plenty of colors used, and that pink hair looks great on Izuna. Monster designs were reused a bit too much in this game, but what little designs are available were done well for the most part. The top screen displays Izuna’s stats when in the dungeon, but it has no use when you are in the town. The stylus is not used at all in this game.

The graphics were good, but I found the music and sound to be great. All of the tracks have a mixture of oriental and pop, coalescing into a killer soundtrack. Short clips and phrases of Japanese add to your listening pleasure. These come from the villagers, the gods, and Izuna herself. If you have been reading all I have written thus far, then you are probably wondering where all this negativity towards Izuna comes. The answer is the game play.

Now, I know that Izuna is a dungeon crawler. However, I have only played a few games like this before my patience went out the window. I was able to finish Izuna the whole way through, but I came close to breaking my DS more times than I can remember. For most of the game, you are in a dungeon that will always, always, ALWAYS, have randomly generated levels. But, before you dive head first into this oblivion, Izuna should go around town, chat with villagers, and shop. One important thing you can do is put your items and cash into storage. When you are set, Izuna must head into the dungeons.

I already mentioned that no dungeon is the same. As you walk through the area, a map is drawn showing where you have and have not been. Every time you take an action, so do the monsters. So, if you stand still, so do the monsters. If you act in front of a monster, the monster you are facing attacks. If you are surrounded by monsters, then all monsters around you attack you after an action is taken. It only gets better. Izuna has a tendency to miss her strikes, which can lead to some frustration. Also, as Izuna levels up, her defense attribute does not rise. The only attributes that visually rise are HP and SP. Her attack power stays the same number, but it actually increases as your level goes up.

Besides attacking, there are a few more things Izuna has at her disposal. She can upgrade her weapons by attaching talismans to them. However, if you attach to many the weapon or armor will break. She can also use the talisman as a magic spell. Only a select few of them are worth using, however. Izuna can throw talismans at an enemy for the same effect, and there is no deduction in SP. In fact, Izuna can throw anything and cause damage. This is a great way to get rid of unwanted items. Basically, Izuna must do all that she can to survive. As you progress down the dungeon, the monsters increase in level. Needless to say, her HP will drain right before your eyes. The only saving grace is a talisman that warps you back to the town, however you have to start back from the beginning of the dungeon.

So, what is it exactly that makes this game so difficult? I realize that my description made the game seem challenging, not insanely difficult like woah. To be honest, the game starts getting difficult around the third of seven dungeons. Before that, it’s pretty straightforward. Then, it is time for you to face the music. First of all, monsters tend to swarm Izuna just before she reaches the staircase. Maybe it’s just my luck, but it happens too often. Second, there are traps. Lots and lots of traps. You can’t see them either, that is unless you use a certain talisman. In a matter of minutes, your escape talisman can get burned away, you become blind, and then you step on a trap that makes four monsters surround you. That is just one of many examples. This game is saying, “Let’s see you try to get out of this one, sucker!”

The saving system is also unforgiving. You can only save when you want to stop playing, and that’s only when you find a stairway or you are at the inn in town. Turning off your game means losing all of your hard-earned progress. However, you can’t save and continue playing. Furthermore, if you get a game over, the game saves automatically. Ouch.

Yet, in only fifteen hours, I finished the game. Despite the game overs, and despite the evil difficulty, this game can be finished in a short duration of time. If you get knocked down, you grit your teeth and go back for more. This game was addicting, even if it was frustrating. By carefully managing your equipment, items, and using those talismans effectively, you can emerge victorious from any situation. Dealing the final blow on the boss was very rewarding, indeed. Once you finish the game, you can find a bonus dungeon, as well as a hidden area of the village to learn more about the god bosses.

Izuna: Legend of the Unemployed Ninja was the first dungeon crawler that I was able to finish. Azure Dreams involved collecting monsters, so that was out. Nightmare of Druaga was a nightmare in and of itself, literally. Izuna was probably far more difficult than both of those games, but with a witty story, great music, and addicting game play, I finished it. Besides, when else can you play as a 16 year-old kunoichi with pink hair? Never, that’s when. This is a game with a love-hate relationship, and both aspects of it are extreme. If your DS requires an RPG, then pick this up. However, don’t expect an easy adventure. Expect pain, punches, and pity because Izuna will test your gamer know-how from the get-go.