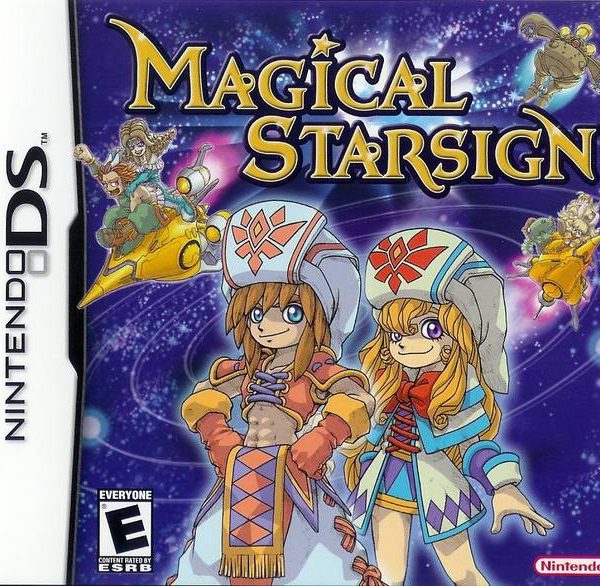 Author’s Note: This review was originally published on January 30th, 2007. At the time, I didn’t think that there were many RPGs available on the DS. I can’t say for sure if I was right or not, but one thing’s for sure: this game hasn’t stood the test of time.

Brownie Brown and Nintendo decided to bring over the sequel to Magical Vacation. The new title, Magical Starsign, is a generic RPG, as generic as they come. But, with it’s hilarious writing and colorful visuals, it does well to satisfy the DS owner who needs a quick RPG fix.

Our whimsical tale starts off at the Will O’ Wisp Academy on the planet Kovomaka. Six students, your main character (you chose the gender and the elemental affinity of either light or dark), Lassi the bunny girl who uses wind magic, Sorbet the lady water mage, hot headed Pico who uses fire magic, Mokka the earth magic using robot, and Chai the wood magic using salamander, learn that their teacher is going on a long trip. However, they know that this is a dangerous trip, and after three months go by without word from her, they decide to explore the entire solar system and find out what is going on.

As you can figure, this is a light-hearted game. The story does have a few dark points, but the funny script and adorable characters shine over all of those parts. Your fellow classmates always have something fun to say, and you’ll really grow to love these characters as they prove that kids are just as capable of saving the world as grownups.

You’ll also learn to enjoy the colorful visuals as you explore the solar system. There are various planets that you’ll wander throughout in this game, each correlating to an element. Also, each planet has their own culture, type of people, and towns. In battles, you can see some monsters that take up two screens, and spells that cover both screens. The graphics were done very well, both in and out of battles.

The battles are actually the only place where you will hear the voice acting. They’re just little, “Hii yas!” and what not, nothing special. The music is fun, if anything else. Nothing note-worthy in the slightest.

Notice there that I said nothing really of note, which brings me to the game play. While I wouldn’t say that the game is boring, it does get repetitive mainly because there is nothing new to enjoy. The entire game is played with the stylus. Shopping, menu exploration, and everything in between is used with the stylus. Talking to people with it and running around the world can be a bit of a problem at times because of how sensitive the touch screen acts. Still, a little practice and things will go smoothly for you. The battles are also carried out in stylus fashion. You tap the action you wish to do, and then watch as it happens. When you are attacked and you tap your character at the right time, you can take less damage. You can also attack, change your position, use items…all of the stuff you are used to in a typical turn based RPG. The main thing you’ll be during in these battles, however is casting magic.

Each turn, your characters recover a bit of magic points. Your character gains a bunch of spells related to their element as they level up. If you’re character is in the back row, your spell will hit all enemies (and look differently) as opposed to having it hit with more power in the front row. In the case of status magic and healing magic, it would effect everyone in your party if used in the back row. Tapping on your character before the spell is cast will cause it to become more powerful, so it’s not like you’re always waiting for a long spell animation to finish.

The main feature of the magic system is the planetary alignment. Say the wind planet, Puffoon, is in the yellow aura…it gets powered up and wind magic is more powerful, for both you and enemies who use it. This adds a bit of strategy to your battles. In regards to light and dark magic, those get more powerful depending on whether it is day or night. So, how much more powerful do the spells get? Much, nearly doubled in power. These can easily turn the tides in a tough boss battle, but you have to beware of your classmates and their elemental weaknesses as well. Still, despite these strategies, the game is generally on the easy side.

Saving the solar system takes around 20 to 25 hours, and there weren’t very many side quests for you to do, just some item collection. There is a monster encyclopedia you can fill up and find interesting information about the beasts you can encounter, which adds a bit of side questing. While you can chose a male or female character and their magic affinity, it doesn’t change the story at all. So, unless you want to see both sides of the magic spectrum, there is no reason to go back for more. The game on the whole is quite average, but considering that there is no traditional RPG out for the DS as of now, it’s a good game to pick up if you’re looking for something along those lines.