Four games for the price of one? And on the go?! For real-real?! 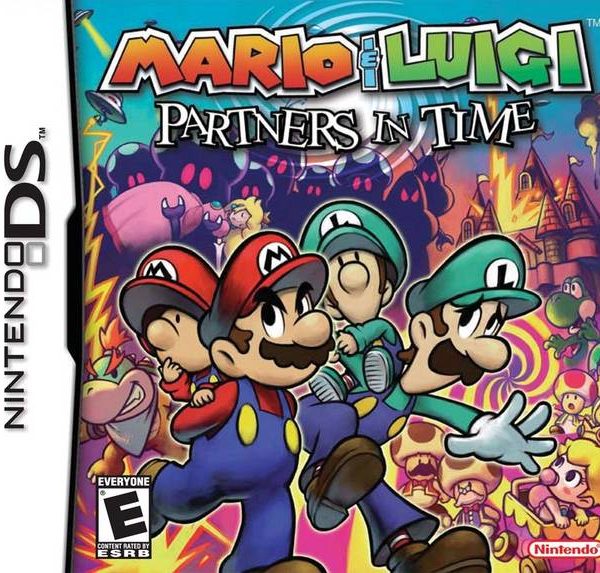 Author’s Note: This review was originally published on January 27th, 2011 and later updated on July 30th, 2013. I’m not sure why I used “witty” tagline-separators here, nor am I sure why I updated it from it’s 2011 publication.

My experience with Baby Mario is minimal. The only time I’ve ever seen him in a video game was when he was the snot-nosed crybaby that rode on Yoshi’s back in Super Mario World 2. The thought of having him, Baby Luigi and the adult plumber brothers in the next Mario and Luigi RPG didn’t sit right with me at first. But, being the huge fan of Superstar Saga that I am, I gave the next installment a try. The humor, the action and the clever platform/puzzle elements make a triumphant return in Mario and Luigi: Partners in Time. Did you like Superstar Saga? Chances are you’re going to feel the same way about Partners in Time.

Youth of the Mushroom Nation.
Professor E. Gads latest invention, a revolutionary time machine, is ready to showcase at the Mushroom Kingdom. Powered by the Cobalt Star, this time machine promises great things for the Mushroom Kingdom. The lovely Princess Peach decides to volunteer and travel to the Mushroom Kingdom of the past. During this time, the diabolical Shroobs begin an assault to turn all residents into creepy, purple mushrooms that hail the evil Queen Shroob. As bad luck would have it, Princess Peach is captured, the Cobalt Star shatters and Baby Peach, Baby Mario and Baby Luigi have arrived in the present day to inform Mario and Luigi what’s going on. “Time” for an adventure to stop the Shroobs and save the past Mushroom Kingdom. This “time” it’s double trouble as Mario and Luigi are joined by their baby counterparts!

The Shroobs mean business! You’ll be surprised at their methods of getting what they want! That being said, the story is (once again) hilarious as all get-out. The interaction between Mario, Luigi and the babies is brilliantly written. That’s just the beginning, too. The rest of the characters contribute plenty of humor to the story. There’s Kylie Koopa, the sleuth reporter! Also, you’ll get to see the Toadsworth of the past interact with the Toadsworth of the present. It’s simply some of the best scripting to grace an RPG and will have you laughing out loud plenty of times.

Baby Brothers Brawl!
Fans of Superstar Saga will be glad to know that the formula for exploration and combat remains the same, but offers new features to make it stand out. The majority of the game will have Mario and Luigi carrying the babies on their backs. By hitting the X or Y button, the babies will be flung up to hard to reach areas. Both groups have their own sets of actions used to solve puzzles. The babies can use hammers to hit switches, burrow underground or guzzle water to put out flames. The adults can spin jump to gain more air time, morph into a rolling ball to increase speed and jump higher than the babies. Working together, the team will be able to hit multiple switches at once and solve some clever puzzles to advance. The innovation feels familiar, but the new features make exploring new areas exciting because it gives an unknown sense of what to expect. Mario, Luigi and the babies can equip armor and badges to increase their stats and they can dig for beans to use at a secret shop, just like in Superstar Saga.

Similar to Superstar Saga, combat begins by touching an enemy. Jumping on them or hitting them with a hammer leads to a damage boost. The battles usually involve the team of four, but there will be times the adults and the babies have to fight separately. The babies do less damage, but they can use hammers. The adults do more damage but are limited to a jump attack. Thus, it’s a good thing they are together most of the game. Timed button presses make their return. Also, you have the ability to counterattack or dodge enemy attacks with the right timing. In lieu of Bros. Points, there are now Bros. Items. These attack items vary and deal tremendous damage to foes so long as the timed button pressing doesn’t miss. Most bosses have a decent amount of energy, so mastery of the right Bros. Items is necessary for victory. In fact, Mario and Luigi: Partners in Time can be challenging if you don’t make sure to properly recognize enemy attack patterns and fail at timed button presses. However, battles are always a blast and leveling up allows you to not only gain an increase in stats, but also allows you to play a roulette game to increase an additional stat of your liking. By the end of the game, battles still feel fresh and unique.

Italian Mushrooms.
Despite being on the Nintendo DS, Partners in Time looks the same as the GBA predecessor. However, it still has plenty of color and character. The sprites are expressive and well animated. As usual, they provide plenty of entertainment with their antics, emoticons and facial expressions. The wide variety of enemies to battle and the new attacks with the babies are always a pleasure to watch. The sound and music are easily one of the highlights of the game. Mario and Luigi still talk in their Italian gibberish, but will also say things like “Okie dokie!” and “Let’s-a go!” Watching them “talk” to their baby selves is endearing. The babies also have their own quips such as “Woo-hoo!” and “Oh yeah!” It may look a bit dated, but the game presents itself well as a whole.

Life Partners in Time
As expected, Mario and Luigi: Partners in Time is short. But, the 20 hours it takes to complete are a joy. There is a secret shop to uncover and the ability to find all of the hidden beans, but they won’t tack on anything substantial to the play time. Still, I recommend this game to fans of the first Mario and Luigi. Not only does Luigi get more (and much deserved) air time, but the babies get some recognition as well. The best part is, their crying isn’t as ear shattering as before. Despite the dated graphics you have a hilarious quest, fun battles, clever puzzles and an entertaining presentation that adds up to make Mario and Luigi: Partners in Time a solid RPG.