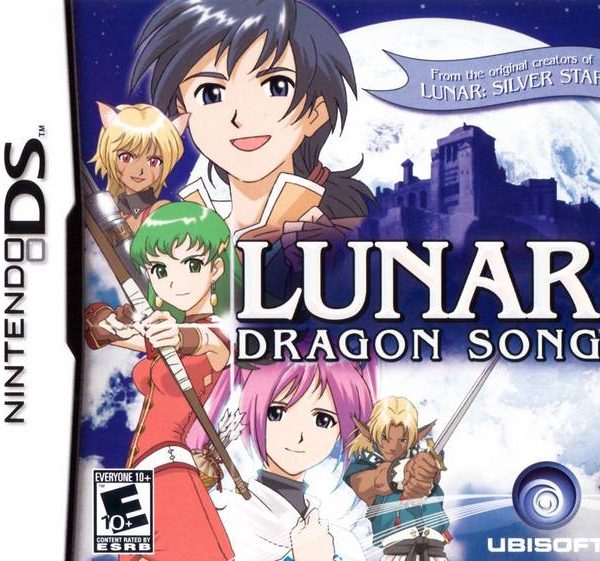 Before starting Lunar: Dragon Song, I kept repeating the following prayer to myself: “Please don’t be that bad. Please don’t be that bad.” When the initial scenes ended and I took control of Jian, it didn’t take long for me to realize that my prayer wasn’t effective. Holy Althena, what in the name of the four dragons happened here? I have played my fair share of awful games, but Lunar: Dragon Song might be the nadir of awfulness. This isn’t even a case of where something is so bad that it’s good; this is straight-up garbage.

So, where to begin? We can start with the story, which features a scrappy young man named Jian and his best-friend Lucia. These youths work as couriers and make their silver via delivering goods across the country. During a routine deliver, Jian and Lucia get their package stolen by a group of monsters. Now, for some reason, this sparks Jian’s insatiable urge to go on a quest to save the world. No, really. After this mishap, Jian decides he wants to go on a quest because reasons. Alex from Silver Star Story idolized Dragon Master Dyne and wanted to follow in his footsteps. Hiro from Eternal Blue was fascinated by ruins and met a strange girl during an excavation, which ultimately set him on his course for world-saving. As for Jian? He likes to sleep in and stand on his head. That’s it. That’s all we learn about him when all of a sudden he wants to make the world a better place. Cringe inducing writing creates a world that feels far removed from previous Lunar’s. Aside from the mentioning of Althena and the four dragons, Dragon Song feels like it’s in its own, despicable world.

For a moment, we can try to focus on some of the good in Dragon Song. Obviously, this won’t last throughout the entire review. Jian, his team, and the world he calls home look nice. The sprites used in Dragon Song are very colorful and have a surprising amount of artistry for such an early DS title. Whether in battle or out, I will give credit to the game’s presentation. The music was another feature that I enjoyed. For the amount of time I suffered through the game, I was able to listen to some good tracks in the towns, on the world map, in battles and so on. The one place where the presentation faltered was in the menus; they were messy.

With that out of the way, it’s time to focus on the features that turn Lunar: Dragon Song into something so terribad, so craptastic that it ends up in a league of its own.

Running: Since the day I first sat down to play Chrono Trigger, I was wowed by the fact that characters in RPGs could run from location to location. From that point, running just seemed like a standard for the genre. In Lunar 2: Eternal Blue Complete, Hiro would walk at a brisk pace in towns and at a slow pace in dungeons. However, he had the ability to perform a quick sprint in dungeons to avoid combat. It was a silly idea, but it didn’t inhibit game play. In Dragon Song, the moment you begin holding down the run button, Jian and his posse will lose HP. The game gives no reason as to why this is, either. Running causes HP loss. It’s like a permanent poison status. When HP gets to below a certain percentage, you can’t run. Walking speed is insufferably slow, so you need to stock up on healing items in order to survive the treks through initial dungeons. By the time your party gained enough levels, their high HP won’t take such a beating. The thing is, why was this implemented in the first place?

Attacking an Enemy: Battles in Dragon Song are turn-based, snail-paced and crap-laced affairs that suffer from multiple issues. At the start of a round, you’ll see your party usually out-numbered by a group of five to six enemies. Your options are limited: attack, magic or item. You are unable to select which target to attack when you pick this option. Instead, your non-adjustable, dimwitted party members will attack enemies at random. Next, enemies on the top screen cannot be hit with standard attacks until enemies on the bottom screen are defeated. Finally, battle animations are slow. While you can hold the R button to speed them up, the lack of a targeting option makes them drag. Miraculously, you can target your party members with restorative items and magic. Such generosity.

Monster Cards: Your levels scale with bosses, whereas regular enemies tend to increase in difficulty the further you get. In some twisted way, you can get by with just fighting a few random battles and relying on something that turns every boss encounter into a tired but effortless waiting game: Monster Cards. These little pieces o’ paper can be used multiple times to increase your stats, lower those of the monsters, heal, and other things. However, the most important thing you can do is inflict poison on your enemies. As long as you have enough healing power at your disposal, you can poison a boss and let the toxins slowly snuff them out. That’s the best way to win every single time.

Virtue or Combat Mode: However, we need to talk about how to get said Monster Cards. You see, a typical battle in an RPG rewards you with some experience points, some cash, and maybe some loot. In Lunar: Dragon Song, you need to choose either experience points OR loot. There are two modes to choose: Virtue and Combat. Virtue Mode lets you earn experience points. Combat Mode lets you earn items. Again, why? Why was this even an idea in the first place? Oh, but there is some silver lining. Finishing all of your enemies in Virtue Mode recovers a whopping 30% of your health and magic, plus it grants you access to a blue treasure chest. Joy.

Money: Recall how enemies will drop items in Combat Mode. They don’t drop currency. To not be a broke-ass joke, you need to use the items you earn from enemies and deliver them through the courier services. Of course, this entails grinding enough of the items, finding the person who made the request, getting a receipt and going all the way back to the courier office. At the beginning of the game when money is a problem, you’re better off selling as much as you can. It’s ridiculous and prolongs the game’s introduction.

Busted Equipment: The final issue with combat relates to never having enough money and the lack of having the ability to target enemies. Certain enemies can steal and/or break your equipment with a single attack. So, that awesome new piece of armor you worked so hard for can be shattered in a second. While you can save your game at any time and retry when that happens, it’s another annoying issue that gets added to the pile.

…what happened here? Why were all of these ideas thought of, much less used? Did people find this stuff fun? I can’t recall the point at which I said, “THAT’S IT! I’M DONE!” but I knew that it was enough. Those that are masochistic enough to get through this hot-mess are looking at 25 hours of game time. But yeah, don’t play this. I don’t care if you’re a huge fan of all things Lunar; avoid this. In fact, avoid people who like this game. They cannot be trusted. The Lunar series deserved better than this.