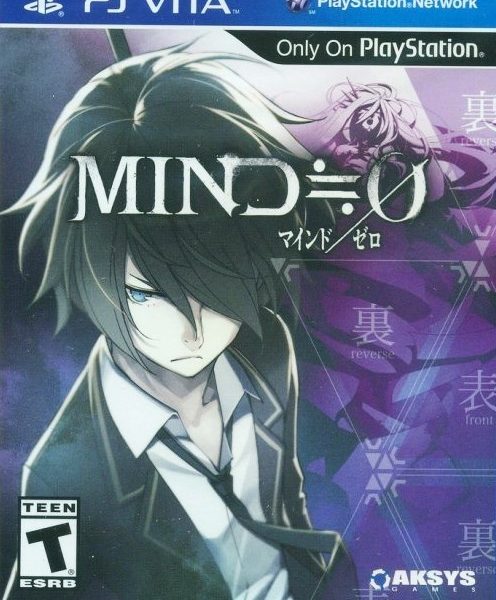 Dungeon crawling RPGs are intense grind-fests that usually go like this: you prepare yourself with your limited funds, enter a dungeon, get as far as you can, go back to the town or hub, get more supplies and continue. Sprinkle in some necessary level building, and your formula is complete. The story usually takes a back seat to the grinding and farming, as does the character development and the setting. One of the Vita’s latest titles happens to be a dungeon crawler: Mind Zero. While the actual title is printed as Mind = Zero, we’ll just be calling it Mind Zero or MZ for the duration of the review. Actually, that’s not entirely true. The “=” in the game has a dot above and a dot below it, but I couldn’t find that on character map. Schematics aside, Mind Zero is a dungeon crawler that has all of the issues found in the genre that need work and updating.

The story starts off with a unique and gritty opening movie. Taking place in Japan, Kei and his classmate are walking home from school when something strange happens. Kei winds up in a weapon shop and is told to pick the right weapon or die. He ends up picking properly and earns the right to control a Persona…er…a MIND, which is a creature that lives inside of Kei and capable of great power. Suddenly, a crazed person turns into a monster and attacks Kei. Joined by his friend Sana, Kei uses the power of his MIND to fight against this beast. With their new found abilities, Kei, Sana and some other residents of Japan need to figure out what this power is while keeping it hidden from both the government and some sinister enemies.

To be fair, the story starts out promising. Kei is a great main character. He’s stoic, but caring. He acts apathetic, but deep down he’s inquisitive. The rest of the team is just as great. Aksys Games went above and beyond with the translation. Kei and his friends talk and interact like a bunch of real people in an unreal situation. My favorite character is Leo, a loquacious high school student who loves buying bizarre items from parapsychological catalogues and infomercials. The hilarity that he brings to the story is more refreshing than a mint julep being sipped under an old oak tree on a hot summer day. Learning about him and the rest of the gang is great, but the story itself doesn’t shine as well as it could in the second half. With such a bleak opening, you would think that the momentum would continue throughout the entire story. Unfortunately, by the time story ends, you will be left with an unsatisfying number of questions.

The sad thing is that there is not much else praise to be given to the game beyond the start of the story and the characters. Progression is a simple matter. You go through a few story events, spelunk into a dungeon, fight the boss in the dungeon and continue with the game. Exploration on the world map is easy because you simply move between various parts of Japan such as Yokohama and Nippori and select places to explore. You can shop for overpriced healing items and overpriced accessories and armor, partake in various side-quests, and talk to your friends to learn more about them. There are 51 side-quests in this game that can range from simply chatting with someone to going into the depths of a dungeon and fighting a ridiculously powerful optional boss. One of the more interesting things that you can do is enhance and upgrade your Skill Cards. Like an old-school RPG, characters don’t learn magic through leveling up. Instead, you will need to give them Skill Cards, which are dropped by enemies. This provides you with the opportunity to customize your favorite teammates as you see necessary. As your characters continue to gain levels, they will have the ability to equip more Skill Cards.

As you can see, Mind Zero is basic when you’re advancing the story and preparing your party. It remains basic in the dungeons, too. You will spending the majority of this 40 hour game in the dungeons. As you move in a first person perspective, a map gets drawn. There will sometimes be treasure chests, switches and other devices that need to be examined to advance. But, most of the time you will just sally forth in hopes of reaching the next story event. This is where battles come into play. Mind Zero’s battle system is simple and turn-based, but it does have some unique features. At the start of your turn, you can hit the L button to summon your Demo…er…MIND. That’s the second time I did that! Anyways, when your MIND is summoned, your stats increase. This means you deal more damage with physical attacks and take less damage. Having your MIND out also lets you use magic with the use of Technical Points and some of your Life Points. When you are attacked with your MIND out, you will lose MIND Points. Running out of MP means you lose a turn and can’t summon your MIND for a couple of turns. You can put away your MIND without wasting a turn, so there’s no penalty to having it out. While you can still attack without your MIND, you won’t deal as much damage to most of the enemies. Furthermore, you will take damage to your LP if attacked. Running out of LP means the character is exhausted and needs to be revived. The benefit to having your MIND is that you can use items and defend to build up MP and TP.

Like I said: basic. Each character’s mind has an elemental affinity that needs to be taken into account when you set your Skill Cards. Kei will deal terrible damage when performing a fire based skill since his MIND’s affinity is water, to give an example. Characters can also use a bunch of their TP and activate Burst, which lets them have an extra turn. But, even with the right skills and the proper gear, Mind Zero is a difficult game. As is typical with a dungeon crawler, there are a variety of issues that turn the game into an endless grind fest where most of your time is spent trying to stay alive. The dungeons are usually way too long, money is always a problem, enemies are never properly scaled in difficulty and managing your inventory turns into a chore. Simply put, there comes a point where you will say that none of this is fun anymore and wish to play something that has more of a modern feel.

At least MZ has a modern look. The Vita’s glorious screen shows some impressive, 3D visuals. Some of the dungeons are especially inspiring. One in particular reminds me of something you would find in the anime Puella Magi Madoka Magica. Enemies, while often times recycled, have a unique look to them. One thing I do like is the creativity that went into designing each character’s Peronae. I mean…MINDs. Their MINDs. MINDs! Ahem. Unlike most dungeon crawlers, you will actually see your characters attack. The character art is sleek and stylish, too. The music, unfortunately, is easily forgettable and hardly worth a mention. Voice acting can be either English or Japanese, but seeing as this game is set in Japan and stars people living in Japan, it just “feels” better when the native tongue is used.

The game is very similar to the Digital Devil Sagas. Both games have some form of alter-ego affiliated with an element, both games are very heavy on the dungeons, both games have dark narratives and both games feature unique characters. So, why is that I hold Digital Devil Saga and Digital Devil Saga 2 in high regard and consider Mind Zero to be a flop? Well, despite the similarities, DDS just feels more polished, complete and has a difficulty that is challenging for the right reasons. Unless you absolutely love spending hours on end in a dungeon and don’t mind an upsetting finish to a story that starts off promising, I recommend picking another RPG for your Vita.