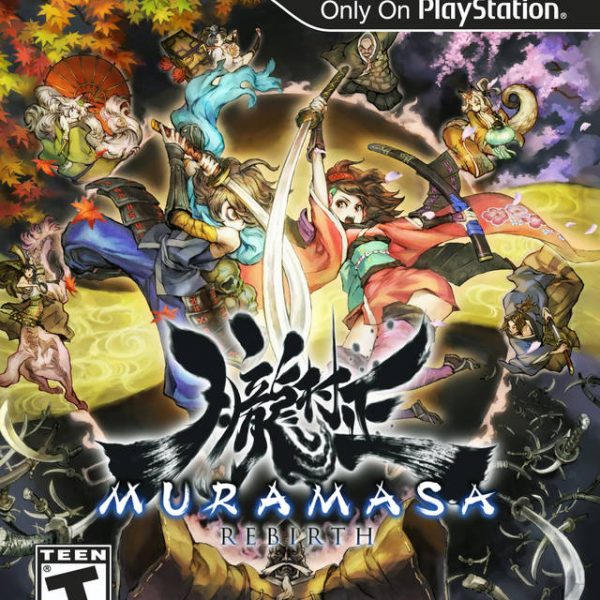 It’s hard to imagine that I used to rely on video game magazines for information and reviews regarding new titles. Somewhere along the way I realized that they were nothing more than unreliable opinion pieces. Indeed, the only reason a game receives a high score these days is because “professional” video game reviewers believe that is what the readers, the developers and the publishers want to see. Unfortunately, I ended up trusting a certain magazine in believing that Vanilla Ware’s action/RPG Odin Sphere was a perfect game. Alas, it was far from perfect. Epic music and stunning visuals aside, Odin Sphere was a mess of a title that received far too much praise. Extreme caution and a need for something fresh came together when I decided to take the plunge and buy Muramasa Rebirth for the Vita. An enhanced port from the Wii, Rebirth ended up being a surprise that I recommend to nearly everyone.

Of course, I am partially biased because the game takes place in a mythological, feudal Japanese setting. There’s something about this era that has always fascinated me, so I had a feeling that I was going to enjoy Muramasa more than Odin Sphere even before playing it. It takes place in the late 1600s and stars two heroes: Momohime and Kitsuke. Momohime is a princess whose soul has been replaced by an infamous warrior named Jinkuro. Kitsuke is a ninja who lost his memories. Both characters need to travel across ancient Japan and retrieve powerful swords forged by Muramasa Sengo. Both have their reasons and motivations and, eventually, both will come face to face with each other. While the game mainly consists of action, the story has a surprising narrative thanks to Aksys Games tweaking the wording to make it believable. There may not be much dialogue, but it feels substantial.

To go along with the setting, the graphical maestros at Vanilla Ware made a masterpiece in capturing ancient Japan. While I never played the Wii version, seeing VW’s handiwork on the Vita is glorious. You will see bamboo forests with leaves blowing in the breeze, beaches with crashing waves in the distance, and rice fields that stretch to the horizon. You will be on tree tops with the sun shining upon them and busy villages drenched in colors. The game is stunning, but many of the areas look the same. Now, I have not been to Japan and I was (obviously) not around during the Edo Period, but something tells me that the various areas don’t look identical. It’s a minor gripe, but one that I feel that is worth mentioning.

Also worth mentioning is that the entire game is voiced in Japanese. If you’re of the following that says “no dub, no buy” then you’re missing out and you’re a lunatic. I say this because the game takes place in Japan. Where they speak Japanese. Not English. Japanese. Get my drift? Good. Moving on, Hitoshi Sakimoto composed a different type of soundtrack that detracts from his usual symphonic orchestra and, instead, sounds right at home with the setting. Flutes, harps, zithers and other instruments of old make up the soundtrack, but you can tell that it is still in that Sakimoto style we all know and love.

So, Muramasa has a great story. It has visuals that cannot be dealt justice with words on a screen. It is further driven by wonderful music and voice acting. Honestly, I knew all of those things before diving into the game. My biggest concern was whether or not the game would be fun. Remember, people were raving about Odin Sphere being fun to play and, well, I didn’t share that sentiment. Luckily, Muramasa is far more fun to play despite the fact that Kitsuke and Momohime have the exact same moves. No matter who control, you will notice that these are two seasoned warriors. They can jump, double-jump, glide and dodge. They can equip up to three blades and one accessory. With the square button, you can create combos on the ground and in the air. Pressing the O button will unleash the sword’s skill. Finally, switching blades after a certain amount of time will execute an attack on all enemies on screen. However, using the sword’s special ability and/or deflecting enemy attacks will eventually cause the swords to break. Broken swords can still be used, but the damage is pitiful. By putting it away, the sword will start to rebuild.

There are two types of swords. Nodachi are slower to swing around, but they usually pack more of a punch. The shorter katana allow for quicker cuts and slashes, but they typically lack as much power. As you continue with the story, you will find new swords and have the ability to forge new ones, too. However, there’s a catch. If your levels aren’t high enough, you won’t be able to equip that shiny new blade. As you traverse across the Japanese lands, enemy parties will pop up. After you wipe them out, you’ll end up with experience points, money and items. A variety of enemies with unique attacks keeps the combat exciting, but Muramasa’s game play truly shines with its epic boss battles. Similar to old arcade titles, you won’t get by just by simply button mashing. You need to recognize their patterns. You need to always have a solid amount of healing items on hand. You need to know when to switch blades and tactics appropriately. If the boss is too difficult, there are things that you can do before the fight instead of grinding for levels. You can cook a variety of delicious looking, traditional Japanese dishes to boost your stats and/or grant special attributes. You can shop for better items and accessories. Finally, there are Caves of Evil that have swarms upon swarms of enemies that will easily help you gain a level or two. However, the best way to overcome difficult bosses is to utilize all that Kitsuke and Momohime have in their arsenal, such as the double-jump and dodge. All in all, Muramasa’s combat is much more fun than Odin Sphere’s and it holds its own against other action games due to it being supplemented by RPG elements.

Both campaigns have multiple endings and secrets, so the total play time for Muramasa Rebirth is around 20 hours. However, the Vita version has new content and trophies to unlock. For those that wish to see and do it all, then you are going to have 40 to 50 hours of game time before you can say you’re a true sword master. The truly challenging Fury Mode will give the most seasoned gamers a run for their money. In this mode, only one hit will result in the death of your character. So, with so much to offer, I am bummed that I took so long to get around to playing Muramasa. Sure, you can play the Wii version but the Vita version lets you play the game on your travels. Even if you’re like me and felt Odin Sphere was an overrated blunder, I still recommend Muramasa because the creators at Vanilla Ware kept the good and fixed the bad.