Delightful and upsetting all at the same time. 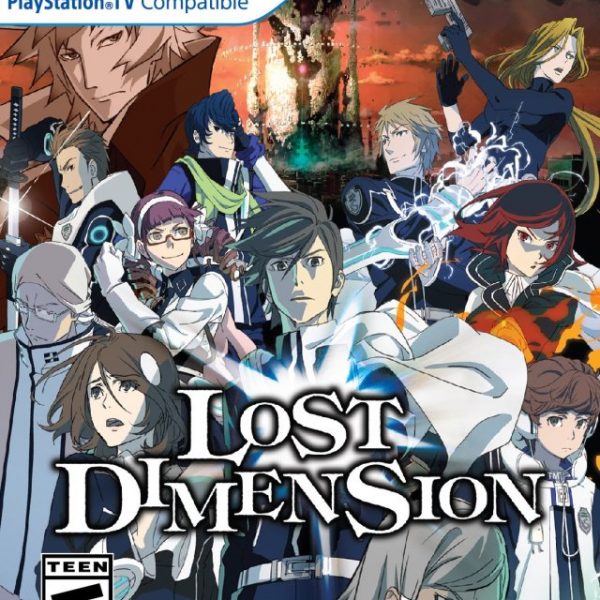 It has been a long time since I have had the opportunity to experience a sleeper hit as unique and fun as Lost Dimension. Thanks to a fantastic localization from Atlus and overflowing creativity from Lancarse, Vita and/or PlayStation 3 owners have the opportunity to experience a game that brings a bunch of new ideas to the table. If you’re looking for a video game that is heavy on story yet doesn’t overstay its welcome, as well as a video game that offers a battle system that has both familiarity and surprise, then I say give this game a shot. This review is for the Vita version of the game, but understand that this suggestion goes for the PlayStation 3 version, too.

Lost Dimension takes place in our world in the not too distant future. A terrorist calling himself The End has erected a massive tower and began an assault on major cities all over the world. Unfortunately, he’s just getting started and has threatened to launch enough nuclear missiles to obliterate the planet. The United Nations has decided to send a Special Forces unit known as S.E.A.L.E.D. to put a stop to The End’s plans. Each member of S.E.A.L.E.D. has a special gift that grants them supernatural powers. At first, it looks like they share the same goal. However, The End reveals that someone in the team is a traitor. Sho Kasugai, one of the S.E.A.L.E.D. members needs to identify the traitor and make sure that The End doesn’t have his way.

Players take control of Sho and meet the rest of the team after the initial story sequences. Sho is a focused yet caring hero and it’s easy to relate to him. Joining him is Himeno Akatsuki, an aloof lady with the ability to control fire. There is also Nagi Shishiouka, a stern woman soldier with the ability to levitate. One of my favorite characters is Toya Obert, a handsome and blunt man with the power to control electricity and magnetism. There are seven other personalities you will get to know. Each one is enjoyable to watch grow as they form a relationship with Sho and the other members of the team. As they climb further and further up the tower, they will start to open up about themselves and how they feel about having their unique gifts. Just remember, some of them are traitors.

In each play-through, one of your teammates is randomly selected as a traitor. You need to use Sho’s gift to figure out who. Lost Dimension plays like a familiar RPG while implementing new ideas to keep each adventure fresh. The entire game takes place inside The End’s tower, but the lack of towns and NPCs to speak with will be the last thing on your mind. At the home screen, you can talk with your party members to raise their affinity towards Sho, purchase weapons, armor, accessories and items, check out data files you find for more information on a subject and save your game. One of the most important and fun things you can do is use Gift Points to upgrade your characters’ unique gifts. Each character has a variety of skills to learn and master. For instance, Sho learns skills that increase his aim, his chance to cause a critical attack and skills that prevent enemy units from attacking. Soujiro learns abilities to heal allies and curse enemies with negative status ailments. Each member of S.E.A.L.E.D. has a large variety of skills to master. Learning them and seeing them in action in battle is always exciting.

Speaking of, battles are another aspect of the game that will feel familiar to you but still retain a sense of uniqueness. Sho can have up to five other members join him in tactical battles that are inspired by games like Valkyria Chronicles and Arc the Lad: Twilight of the Spirits. Using a Player Phase/Enemy Phase system, characters can attack, use their gifts, or use items during their turn. Using gifts requires Gift Points. It also requires Sanity Points. Each player on the battlefield has a sanity meter that will slowly go down as the battle proceeds. Once their sanity is gone, the character will gain an increase in power but will be uncontrollable; unable to distinguish friend from foe. The most important thing you can do on your turn is use the Defer option. This lets one person give their turn to another, offering a new way to battle in a classic system.

Once the battle ends, more fun happens. The results screen will show you how much experience, money, and gift points you earn. You will also earn a ranking. Finally, Sho will hear the inner thoughts of each participant in battle. The thoughts will flash in red and white text, with the red text indicating that there might be a traitor in the group. Back in the home screen, you can use Sho’s gift to deduce who the traitor is through logic as well as with the use of Vision Points. You only get a limited amount of Vision Points, so it is up to you to figure out the potential traitors and properly identify him or her. You also need to convince the rest of your team that he or she is the traitor. When the time finally occurs to expose the traitor, you will enter a new area and watch as someone you thought was a friend get erased from your party. Luckily, you can still use their gift by giving their remains to someone else in the party. Not only does this provide you with their skills, but it also unlocks new skills depending on how you set everything up.

The graphics in Lost Dimension might be missing some polish, but they still look good. The game has some unique enemies, some impressive looking attacks and some of the best 2D character art I have seen in a while. The battlefields looks slightly dated, but it’s easy to overlook this flaw. Also, there are lovely, high-quality anime cut scenes thrown into the game that play during key events. The music is Lost Dimension is wonderful. I can’t recall who composed the score, but I intend to find out. Each song is well done and never grows old. This is one set collection of music that deserves some listening long after you finish the game.

Depending on your point of view, you will be either excited or upset to learn that Lost Dimension is a short game. Even after going through all the stratums in The End’s tower, finishing off side-quests and purchasing the best items, one game will last only 15 hours. That said, this is a game that is meant to be played multiple times in order to see the true ending and the real reason behind The End’s malice towards the world, Sho and the members S.E.A.L.E.D. As of this writing, I’m on my third game right now and I’m still having a blast. Part of that is due to the generous New Game Plus, but a more important part is because I’m getting closer and closer to the truth. This review is full of praise, but the game does have some issues. On the Vita version, there have been times the game froze and caused me to have to restart the system. Another minor issue is that the game can be too easy, making it so there is no need to bother with upgrading the characters. I can rely on brute force instead of strategy to achieve victory. Knowing those issues, I still recommend Lost Dimension to fans of strategy RPGs and great stories. Enjoy exposing the truth in one of the most fun sleeper hits of the year.