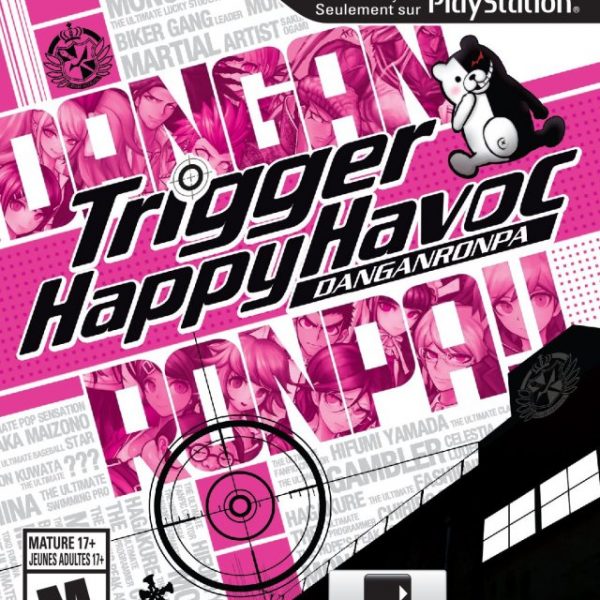 Puhuhu!! All shall rise for Monokuma! And for my review of Danganronpa: Trigger Happy Havoc. You may now be seated. Trigger Happy Havoc (THH) is a unique, fun and shocking title that satiates a gamer’s taste for something different. Now, as some of you may know, there is a splendid anime of the same name and, if you’re anything like me, you watched the anime without the knowledge of knowing a game exists. Furthermore, some may have already played the PSP version of the game. I will say that all forms of this franchise are great, but if you only want to experience it once, go with the Vita version. Thanks to a solid translation from NIS America and plentiful originality from Spike Chunsoft, THH is a solid title. Unfortunately, there is one MAJOR negative aspect of the game that I will discuss near the end of the review. For now, let’s get to the good stuff.

THH is centered around Hope’s Peak Academy. Only the most elite students are given access to this high school. In other words, students have to be the “ultimate” at something. So, you can imagine the surprise of Makoto Naegi, an average student through and through when he gets randomly selected to join the elite student body. Despite not having any “ultimate” abilities, he was picked due to having “Ultimate Luck.” As he sets foot inside the massive campus, something strange happens. He passes out and wakes up inside one of the school classrooms. However, the windows have massive metal plates covering them, security cameras are everywhere with weapons attached to them, and the entire school is empty except for 14 other “ultimate” students. Things get even stranger when everyone learns that the mastermind behind all of this nonsense is a stuffed bear named Monokuma. This dastardly mascot tells them that they are trapped in Hope’s Peak forever. However, if they do want to escape, they need to murder a fellow student and get away with it. Unfortunately, if they are caught, then the murderer gets executed.

Hope’s Peak sounds more like Hopeless Peak, am I right? A story this nutty can only come from the land of the rising sun. As you slowly unravel the mysteries behind Hope’s Peak, you will learn all about Makoto’s friends, enemies, and history. Unlike the anime, there is much more to learn about the characters. Hearing about Leon’s ambitions or Sakura’s history might be reason enough for those familiar with the anime to check out the game. Having a much more realized cast definitely helps bring the game more to life. Furthermore, playing as Makoto lets you explore Hope’s Peak from a first person perspective. As you move through the gloomy hallways, you can examine various objects and rooms that add to the drama.

THH is a linear game divided into chapters. For the most part, the chapter begins with the students gathering in the dining hall to discuss ways of potentially escaping. Then, Makoto is given Free Time to spend with the students. As you grow closer to your friends, you will unlock abilities that help with the Trials. These will be discussed later. So! After your Free Time, one of your students will likely end up dead. This begins the Investigation of the chapter. You will examine the crime scene, talk to other students for their statements, and try to wrap your head around the murderer and their motive. After you gather all of the evidence, the Trial begins.

There are four aspects to the Trial. The first is the Non-Stop Debate. The students go around the room and discuss an issue related to the murder. It is up to you to find a contradiction in someone’s statement and use the evidence you found to explain. The evidence gets turned into a Truth Bullet. In glorious anime fashion, firing a Truth Bullet causes a break in the debate and sheds more light on the murder. The next aspect of the trial is called Hangman’s Gambit. Makoto needs to think of a key word that provides more evidence to the situation. In Hangman’s Gambit, letters will fly at you. You will need to select the right letters in the right order to uncover the key word. The third aspect of the trial is called Bullet Time. My personal favorite, Makoto will go head to head with another student and try to get them to confess to something. You need to match the rhythm of the music playing to the beats getting circulated on the screen. Using the X button will cause a target to appear over the other student’s statements. Using the triangle button will shoot a bullet to “destroy” that statement as well as take down their energy. Finally, using the square button reloads your bullets. It’s a catchy and methodical section of the Trial that is both fun and challenging. Finally, the last part of the Trial is the Closing Argument. Makoto needs to piece together the murder from start to finish in a comic book format.

Anytime Makoto messes something up, he loses energy. If all energy is lost, he ends becoming the one blamed for the murder and the game ends. Luckily, THH is very forgiving and lets you pick up where you lost. With multiple difficulty levels, THH is accessible to those who want a challenge or to those who just want to enjoy the story. No matter which way you look at it, getting closer to the truth has never been so much fun. Spike Chunsoft took a different approach with this game. Unlike the puzzle solving of 999 and Virtue’s Last Rewards, gamers need to be quick thinkers and pay attention to all of the evidence presented to them.

Speaking of stuff getting presented to them, THH is a fantastic looking game. 2D character models are placed in front of vibrant 3D backdrops. As Makoto investigates Hope’s Peak, players will get to experience the neat graphics and listen to a fantastic cast of voice actors either in English or Japanese. I recommend giving both a listen, because Monokuma sounds wonderful in both languages. The music in THH sounds as it should and varies with every situation. While a bit repetitive, it does its job.

Solving all that there is to solve doesn’t take long. My time was a little over ten hours. However, there is a gallery of music, images and movies to unlock and a fair amount of trophies to acquire if you’re in the mood to do it all. Earning this platinum trophy isn’t difficult, but it is very tedious due to the one aspect of the game that was enough to bring it down three points. Finishing the main story unlocks a simulation game called School Mode. Essentially, you have to gather, clean and build stuff for 50 days. Playing School Mode is the only way to unlock everything, but doing so feels like a chore. For an extra mode of play, this came as a major disappointment but, like I said, if you want to do it all you need to get ready to power through it. In total, it will take at least four times.

But, those not caring about extras and those that enjoy mystery/thriller novels will find something to enjoy with Danganronpa: Trigger Happy Havoc. If you buy the special version of the game, you get a soundtrack and an art book. For me, the game was all I needed to relive an exciting anime I watched so long ago. The Vita is really starting to become my portable system of choice and games like this make me proud to be a Vita owner. Hopefully, this trend continues and more unique titles get localized for us. Thanks for reading! You are all dismissed!