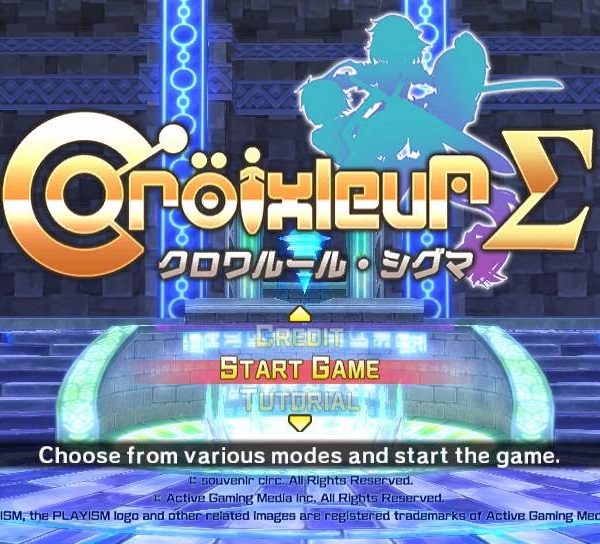 Sometimes, there are times when you want to turn part of your brain off, pop in a game, and just button mash away to kill some time. You don’t need to think too hard about what you have to do to achieve victory; you just need to go through the motions. When I first watched some videos of Croixleur Sigma, that was the impression that it gave me. It looked like a mindless hack n’ slash game featuring adorable anime girls. I can confirm that this is what it delivers. In fact, that’s all it delivers. The action starts exciting, but turns into tedium the more you play. The only variety that Croixleur Sigma offers is in it’s plethora of accessories that need to be purchased with in-game currency. But, I’ll talk more about that later. Croixleur Sigma is a game worth playing in small doses; doses much smaller than the developers were hoping for.

When the game begins, you can pick a variety of mode options. For me, I started with the Story Mode. That was a mistake; not because the story is bad, but because the game immediately throws you into combat. After promptly getting a game over, I went to the tutorial mode. The majority of your time in Croixleur Sigma will be spent fighting hordes upon hordes of oddly designed enemies in the same, generic looking circular arena. You start by picking a warrior, selecting up to four weapons, and then entering the fray. As you defeat enemies, they will drop coins that are used to purchase accessories and to power up your over-the-top ultimate attack. Each girl has a standard combo, a dash, a jump, and the ability to use their weapons special ability. Other than their standard combo and the jump, performing these attacks drains magic points. While the magic meter refills automatically at a generous rate, you can find yourself lacking enough MP to do much of anything except scurry away or hit-n-run. If things look hairy, you can hit both shoulder buttons to repel all monsters. Enemies dash towards you at full force, or they will cast magic from afar. Either way, Croixleur Sigma is easy to pick up and play, but difficult to master. The problem? It really outstays its welcome after about an hour. You will see the same enemies, the same arena, and the same special attacks. Despite having the option of multiple characters, each one plays about the same. The lack of variety makes Croixleur Sigma feel soulless. No matter which mode you’re playing, you will be going through the exact same motions.

Touching back to the Story Mode, Croixleur Sigma takes place in the Queendom of Ilance. Two members in the queendom from two different families are participating in the Adjuvant Trials in a neighboring, magical tower. The first is Lucrezia Visconti, a bubbly red-head that enjoys a good fight and teasing her friends. The other is Francesca Sorano, a capable warrior that is taking these trials far more seriously than Lucrezia. That’s really about it. There are some dull dialogue sequences thrown in at different times, but the story can be largely ignored. Sadly, a good story with better characters would have helped with Croixleur Sigma. Performing the same motions with each character in the same arena in the same enemies might have been more appealing with better characters.

Really, the only time the game shows any semblance of personality is in the shop. You can use the above mentioned coins to buy a vast number of accessories that alter your heroine’s appearance and provide some passive benefits. If you don’t mind the endless, mindless repetition then you can potentially spend hours on end earning enough coins to buy everything available.

Croixleur Sigma looks nice on the PlayStation Vita. It runs at a smooth rate no matter how many enemies are on the screen. Some of the special attacks are fun for a few looks, but like the rest of the game, you end up just glossing over them before long. The real drag with the graphics comes with the same, circular arenas appearing over and over with the same sets of enemy palettes. The lack of unique battle arenas adds the game’s soullessness. The music is catchy, but nothing worth playing outside of the game. The characters are entirely voiced in Japanese.

For me, going through the game once with Lucrezia and fiddling with various weapons was enough. Finishing the story mode with each character should take about five hours. Those that wish to add their scores to the score board, try their hands at different modes, and buy as many accessories as possible will be looking at much more time. I just have a hard time believing anyone would want to do all of that. Croixleur Sigma’s mindless, soulless repetition appears moments after you begin. The actual playing is well designed and runs well, but what you see at the start is what you’ll see until the very end.

Overall, 5/10: Croixleur Sigma’s endless action is the only thing appealing, but even that loses said appeal before long.