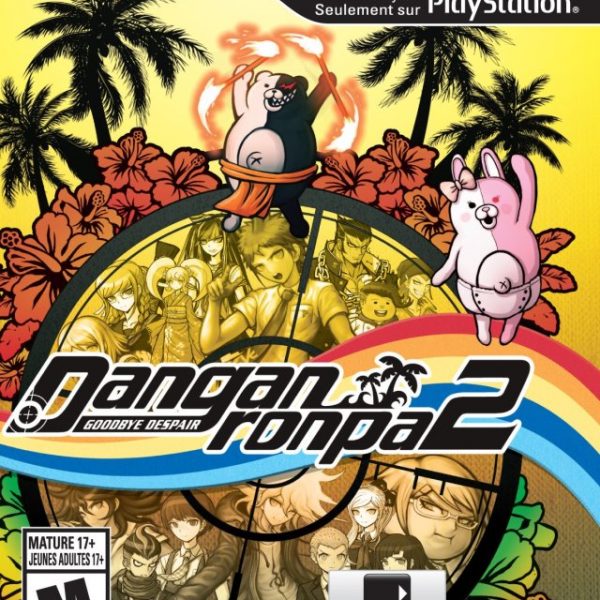 Puhuhuhu!! Guess who? That’s right, Monokuma has made a triumphant and mysterious return! Danganronpa 2: Goodbye Despair for the Playstation Vita is an entertaining, edge of your seat murder adventure that brings you new characters, new locations and new ways to commit murder. For those of you who enjoyed Trigger Happy Havoc, then this is the perfect game for you. DR2 has share some similarities found in THH, but there are plenty of new things that separate the sequel to make it unique. The bottom line is this: if you enjoyed the first game, there is no reason you shouldn’t enjoy the second. That said, DR2 has some issues that would have made the game more enjoyable.

The story of DR2 stars starry-eyed Hajime Hinata. This young man has admired Hope’s Peak Academy for years and has finally been given the opportunity to become one of its elite students. For some reason, Hajime cannot remember what his “ultimate” ability is or how he got there in the first place. But, he is still excited to be a part of the academy. That is, of course, until he passes out and ends up on a tropical island with 15 other students that each have an ultimate ability. With no recollection of how they got there, they meet their supervisor: a stuffed rabbit named Usami. This adorable and pink bunny tells the students that they need to work together to obtain Hope Fragments while they enjoy their life in tropical paradise. Unfortunately, things go slightly awry. Usami and the rest of the students get ambushed by Monokuma, the diabolical bear from The Killing Game. Once again, the students are trapped on the island with no escape. However, if they do want to escape, they need to murder a fellow student and get away with it. If they are caught, then the murderer gets executed.

With a new batch of students, the return of Monokuma and a helpless Usami all settling in on Despair Island, you can imagine that the story in DR2 is just as great as the first. Some students will die by becoming victims and others will receive Monokuma’s special forms of punishment. Despite certain characters meeting their maker, the new cast of characters experience fantastic growth and character development. Gundham Tanaka, the Ultimate Breeder, may come off as a social misfit dressed in a gothic student’s leftovers, but there is a depth to him that will surprise you. Nagito Komaeda appears to be a soft-spoken student who is too hard on himself, but there is a sinister side to him you would never expect. As you unravel the mysteries surrounding the island, Monokuma’s return and the identity of Hajime Hinata, you will get to experience an excellent story that will keep you wondering what the heck is going on.

Playing as Hajime is very similar to playing as Makoto from Trigger Happy Havoc. In certain areas, you will be able to explore the contents of a room and interact with other students. Exploring the various parts of the island lets you actually move Hajime in side-scroller fashion. Both methods of travel work well for the game and if you don’t feel like walking, simply use the map to take a short cut. Hajime is given Free Time during certain intervals of the story. With Free Time you can earn Hope Shards to buy skills by getting closer with your friends. Filling out a character’s profile with all of their Hope Shards will unlock new skills. Eventually, one of Hajime’s classmates will end up murdered and you will have to begin gathering clues in order to solve the case during the Class Trial.

Just like last time, Class Trials move at a rapid pace as Hajime and the others piece together the murder. If he messes up something, he will lose energy. There are five aspects of the trial. First, there is the Non-Stop Debate. The students go around the room and discuss an issue related to the murder. It is up to you to find a contradiction in someone’s statement and use the evidence you found to explain. Other times, you will have to agree with someone’s statement. The evidence gets turned into a Truth Bullet. In glorious anime fashion, firing a Truth Bullet causes a break in the debate and shed more light on the murder. Next, we have the Rebuttal Showdown. When a classmate suddenly argues against Hajime, he will need to cut through their argument and find the contradiction. Only this time, it will play out like a sword fight. Logic Dive is the most fun of the features. Fans of games like Cool Boarders and 1080 will enjoy snowboarding through cyberspace as they pick clues that bring the truth closer. The next feature is the least fun. In fact, it brings the score down. Oddly enough, they have decided to call it Improved Hangman’s Gambit. I will be the first to tell you that there is nothing improved about it. This mess of a game makes you combine two of the same letters to create a word. However, if you mess up the order then you take damage. Even worse, if two different letters touch each other, then you take damage. Your life bar will literally drain before you eyes as you frantically try to find the right letters to solve the puzzle. Finally, making your Closing Argument is much more fun. You will be given stocks of panels that need to be placed in their designated slot. Despite the unimproved hangman, the Class Trials are easily the best part of the game. They have multiple difficulty levels, skills to use and are forgiving in the event you lose all of your energy.

For those that enjoyed the unique aesthetic of THH, you will be happy to know that DR2 is also a fantastic looking game. 2D character models are placed in front of vibrant 3D backdrops. As Hajime investigates the island and all it offers, players will get to experience the neat graphics and listen to a fantastic cast of voice actors either in English or Japanese. I recommend giving both a listen, because Monokuma still sounds wonderful in both languages. Usami also delivers a fantastic performance. The music in DR2 has some old tracks and some new ones. For the most part, the music is easy to forget. However, there are a few songs that will have you humming along.

Revealing the truth behind Despair Island takes longer than one would expect. While the game only has six chapters, you can expect to be playing for 15 hours. Finishing the main scenario isn’t the only thing you can do, though. There is a gallery of music, images and movies to unlock. There is also a mini-novel and an action game that lets you control Usami. Trophy hunters will be in for an experience similar to before if you want to collect everything. Earning this platinum trophy isn’t difficult, but it is very tedious due to the one aspect of the game that, for some reason, the developers decided to bring back. Finishing the main story unlocks a simulation game called Island Mode. Essentially, you have to gather, clean and build stuff for 50 days. Playing Island Mode is the only way to unlock everything, but doing so feels like a chore. For an extra mode of play, this came as a major disappointment but, like I said, if you want to do it all you need to get ready to power through it. Hajime also has to raise a variety of virtual pets, walk a certain number of steps and perform other feats that eventually lead to a 30 to 40 hour game.

Despite Island Mode and the so-called Improved Hangman’s Gambit, Danganronpa 2: Goodbye Despair is a worthy sequel. If you enjoyed getting to the shocking truth in Trigger Happy Havoc, then you will enjoy doing the same with a new setting and new cast of characters. Get your thinking cap ready and get those fingers ready to fire some Truth Bullets because Danganronpa 2 gives you the same fun stuff that made the first title so enjoyable.