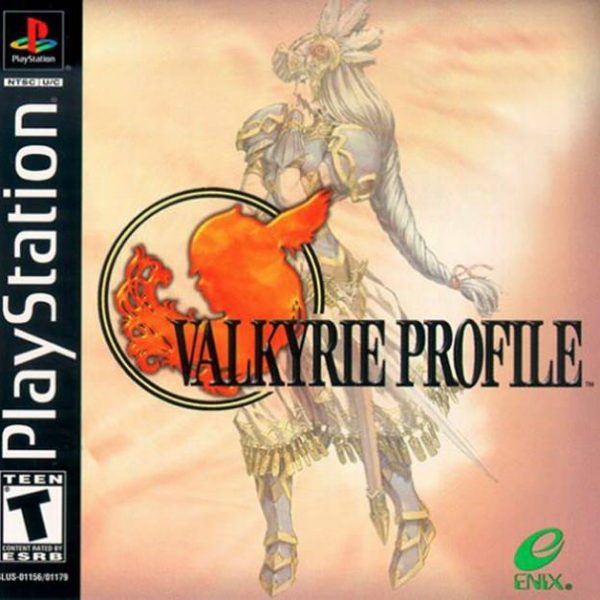 Author’s Note: This review was originally published on January 29th, 2004. Early reviews like this one are embarrassing. But, they’re interesting to read in order to step back in time and see what was going through my head. Today, Valkyrie Profile is still one of my favorite games of all time. The review is poorly written, but the overall score has not changed.

I was not too sure about buying this game when I read the back of the box and it said ”From the makers of Star Ocean.” Well, once again, someone else purchased it so I didn’t have to. Later, I tried it and I am impressed. This game is FUN. It does have flaws, but it’s still one the best RPGs for the PlayStation.

Story: 8/10
I’ll start off by saying you get the WHOLE story by getting the best ending. Now than, the story itself: The world of the gods is soon getting close to the time of Ragnorok. This means that their world will be destroyed. Odin has summoned a mighty Valkyrie to find the souls of dead warriors, train them, and send them up to fight against the approaching enemies. With guidance from the goddess Freya, the Valkyrie will try to save her world. The plot only thickens if you get the right ending. If you get the other two endings, there is practically no plot at all. So, the story is good. It doesn’t pick up if you don’t play the game right, but if you do then you will be in for a major surprise.

Gameplay: 8/10
The game play is, like the story, interesting at first. Then again, there is a lot of stuff to learn and use to it’s full potential. You start off by pressing START, and that will start a sequence when Valkyrie hunts for people in danger of dying. That progresses the story of the game. You control Valkyrie, fly to that location (you can stop wherever on the way) and then watch as the story plays out. You’ll also get directed to dungeons. This is where you level up your characters, and then send them up to Valhalla. Repetitive? Yes, but still keeps you going back for more. There are no shops in the game. In fact, you won’t find a speck of gold. You get ”money” by doing well in each chapter of the game. If you fulfill requests made by Freya, she’ll reward you with gifts and ”money.” You can use this to ”buy” things from the ”shop.” I know I’m not being specific, but you just access this place from the menu. Another thing you get is the Experience Orb. This holds a certain amount of EXP. You can use this to level up your characters quickly, without fighting. You get this by doing well in each chapter and sending gifts up to Odin (from special treasures). All of this may sound really confusing at first, but after you play the first chapter you will get used to the way the game plays.

Battles: 10/10
These are awesome. You see the enemies in the dungeons. If you swing your sword and it hits the enemy, you get the initiative. If the enemy hits you, then they get the initiative. If you don’t feel like fighting but have no way of getting around your enemies, you can freeze them with an ice crystal and quickly move on. The battles are turn based battles, with a bit of strategy to them. Ok, so you have your four characters. You have three fighters in the front and one mage in the back. Each button on the controller (/\, [], x, and o) corresponds to a character the way they are lined up. So the back character will be under the circle command. When it’s your turn, you press just one button and the assault begins. The button pressed will cause that one character to do one attack. Then, you can press the rest of the character’s buttons to continue to assault the enemy. Each character has three attacks at most (each different). By utilizing these attacks properly with all characters, you can make a bar fill up in the corner of your screen. If it fills to 100, you’ll get flashing message to do one characters special attack. By pressing a button, that character will do their special attack for major damage. Each one is different and TOTALLY cool. By using all of these correctly, you can build up tons and tons of damage with combos. With mages, they have a variety of spells they can learn with spell books. When they are equipped with special weapons, they can do a big magic attack for tons of damage. The battles are great. I love entering dungeons and kicking the crap out of my enemies with my massive combos.

Characters: 6/10
With the exception of Valkyrie and a few others, you really don’t get to learn much about the characters. There are tons of them, and each one appears interesting at first. However, after you recruit one, then they stop talking and have nothing to do with the main plot. This is especially true after you send them up to Valhalla.

Graphics: 9/10
These are also great. The character sprites are much more detailed than the ones from Star Ocean. They have more color, and show more emotion. The spell effects and special attacks are quite cool behold. Wait until you see what Little Miss Valkyrie is capable of! The fields are 2D. They are very easy to navigate through. The hand painted art styles are full of detail. My complaint comes with the monster designs. There are very little models used in the game. They are creative, but repetitive.

Music and Sound: 7/10
The music is average. I really can’t recall any songs, with the exception of the opening theme. The music isn’t bad, but it isn’t exciting. Maybe adding some orchestrated songs would give it more feeling for Norse mythology.

The voice acting is amazing. The character voices are so fitting, and the acting is perfectly well done. You will most likely recognize the character’s voices from anime. These voice actors and actresses have experience, so mad props for this category.

Replay Value: 8/10
There are three difficulty levels and three endings. There are many characters to use. There are tons of items to earn. And, there is a bonus dungeon that you can play through after the game is complete. These extras all add up to the replay value. Playing it again is a requirement if you want everything.

Difficulty: Various
You set the difficulty level at the start of a new game. This effects how hard the monsters hit. The learning curve is pretty smooth. The instruction manual may be a pain to read, but you’ll need it to fully understand everything. Any RPG player will enjoy this game.

Buy or Rent: Buy
Buy this game as soon as you find it. It’s a rare bird, and spotting one will indicate that luck is on your side. It may cost you 40 dollars, but it’s so worth it. Even if you didn’t like Star Ocean, you need to try out this little gem.

Valkyrie Profile is a great game. It may take a while to learn, but soon enough you’ll be blazing through the bosses and recruiting the souls of the dead like a pro. The battle system makes the game even more enjoyable. The game does have flaws, but there is enough good stuff in it to make you forget about them. Now, excuse me while I go worship Freya. That goddess has got it going on, girlfriend!