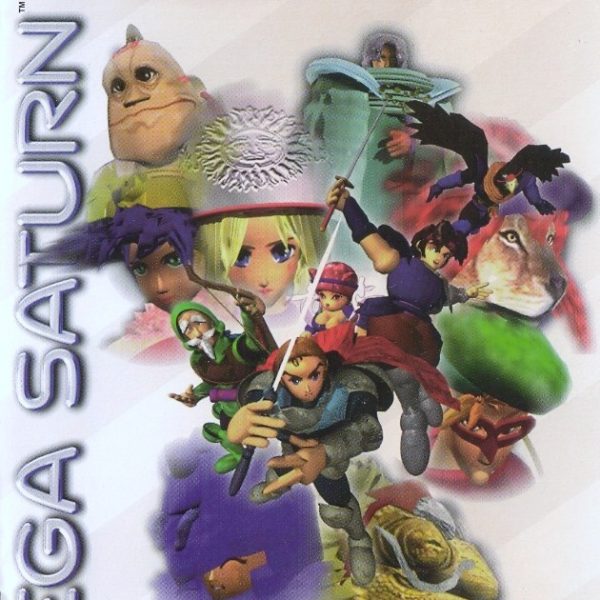 One of my biggest regrets as a gamer was never getting the chance to play the Sega Saturn during its era. I’ll be the first to admit that I was far too busy to be bothered with something from Sega because Sony’s Playstation had all that I needed. Of course, I’m mainly talking about RPGs. As most of you know, the PS1 was the go-to system for anything that was related to level building, character development, and hours upon hours of game time. Well, the Sega Saturn had some of that, too. In fact, some folks will tell you that the Sega Saturn had a better RPG library than the PS1. Unfortunately, not all of the games were a hit. This is the case for Mystaria, which was renamed to Blazing Heroes for the United States. This isn’t a bad game, but it is very difficult to play due to how far the strategy genre has come and due to the game’s hideous design.

Hideous is actually being nice when describing how the game looks. The Sega Saturn is supposed to display 2D graphics with the finest quality. 3D graphics are a different matter. Characters are blocky, have a tendency to glitch when they move and have ridiculous facial features. I’ll acknowledge the fact that the characters are unique looking, but the same cannot be said for the monsters and the environments. This is an example of not understanding how to fully utilize 3D technology. Even the spells and skills are mediocre at best. Blazing Heroes is an ugly looking game no matter which way you look at it. The music department is better, but not by much. There isn’t much to divulge about it since the tracks are nothing more than background noise.

With that said, I am happy to tell you that the rest of the features of the game fared slightly better than the graphics. Let’s begin with the story. It takes place on the continent of Mystaria. You play as a pretty prince named Aragon. Aragon’s kingdom has been taken over by a warlord named Bane. It’s Aragon’s princely duty to find 12 heroes from across the land and put a stop to this non-princely evil. That’s the narrative of the game in a nutshell and it doesn’t change too much as you progress. Aragon fights for princely good, Bane fights for diabolical evil, and cliche dialogue is spewed back and forth by both sides. The heroes who join Aragon act how they look. Aragon acts princely and righteous. Saura is pious, kind and always uses her healing powers for love. The ninja Raiko doesn’t say much. Basically, each character fits their one-dimensional roles. While normally not a problem, the dialogue’s shoddy translation was a problem. You can tell that proofreading was not on the agenda at the time of the release.

Battles in Blazing Heroes are turn-based and take place on a giant grid. A character can move and perform a variety of actions as long as they have enough Energy Points. A neat thing about Blazing Heroes was that you can select which character moves first, second, third, etc. thanks to a surprisingly innovative turn system. When a character acts, he or she does not gain experience points. Those precious bits of RPG currency get handed out at the end of a battle. Attacking an enemy from the side or the rear deals more damage, certain skills and attacks have a range limit, and there’s the rest of the stuff I’d normally describe has been seen time and time again in the SRPG genre. I’ll admit, I’m getting kind of lazy with writing these reviews. But, hey, let’s see you write over 300 and try to retain some form of originality when describing a game’s feature!

I digress. My favorite aspect of the game is the skill system. As you use special attacks, they gain experience and can become stronger. This also unlocks new skills. There were many skills to learn and it adds much needed depth to a genre that can get stale easily. You can only have six characters in combat at a time. This makes that grand feeling of an epic battle for the greater-good not so–well–epic. Still, with a unique skill system and a variety of characters at your disposal, battles have much to offer. There are downsides, though. Certain skills take too long to execute, there aren’t any bonus battles and the overall quest was short. It was also clear to me that this was a title developed for a novice audience due to the enemy AI being dimwitted and cowardly.

Like I said, the quest was short. After the first battle, over half of the 12 heroes join your side. The rest of them join after about 20 hours. While a short RPG isn’t necessarily a bad thing, it felt like the game was still lacking in terms of character development and content. The battles were the best part of this title, but their negative aspects couldn’t save the score from being above average. With an outdated look and boring musical ambience, this is one of those games that is better left in the video game archives. If you are like me and never got around to owning the Sega Saturn, you have plenty of RPGs to check out. Blazing Heroes is, unfortunately, one that is not worth hunting down.