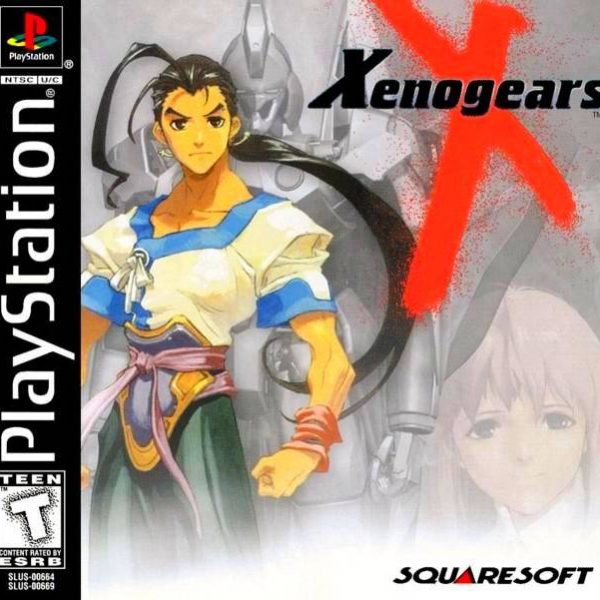 Author’s Note: This review was originally published on April 26th, 2010. Like other reviews of the time, this one features “witty” taglines that separate each section.

Xenogears is one of the few Squaresoft games that people will either love or hate. I’m one of the rare individuals who found it to be fair. I can tell the lovers that the game has a ton of problems. I can tell the haters that the game is not as bad as they make it. This story driven RPG was chock full of good ideas, but many of them were lost in the oceans of text that you are forced to read.

The Lazy Life in Lahan.
After gamers watch the opening animation in which a massive space federation is destroyed, we are taken to the quiet village of Lahan that lies between two super powers who are at war with one another. An orphan with no recollection of his past, protagonist and all-around good guy Fei Fong Wong loves his life in the small village. The other villagers have grown to love Fei, as well. The night before the wedding of Fei’s two best friends, Timmy and Alice, Fei visits Dr. Citan Uzuki to retrieve some supplies. On the way home, he is horrified to see giant war-mechs flying towards Lahan. Known as Gears, these massive war machines are the latest in war technology. Fei jumps into action, and into the Gear known as Weltal. Although not a Gear pilot, Fei handles the machine effortlessly. How is this possible? Just who is Fei? What was that space federation that plummeted to the earth? All of these questions and many, many more will be revealed as Fei and his allies embark on a journey of discovery.

The story of Xenogears starts off promising, and for the most part, it is. In fact, there are times when Xenogears will make you question your own humanity and existence. Certain events will make you think deeply about religious aspects and the power of the human mind. Finding out what happens next with supremely well developed characters will leave you glued to the screen from the start right to the end of the first disc. Then, you reach disc two and it all goes down from hill. In order to get the entire script on one game, the developers had to cut corners in order to explain the entire story. Disc two will force feed you wall, after wall, after wall of text while a cross swings back and forth in the background. What was once a well told story becomes an arduous task to see how much you can read before falling asleep. If Squaresoft cut parts of the story out or made the game a series, they could have done away with that awful method of storytelling and made the great story into something less painful to progress.

“It’s-a-me! Fei!”
Xenogears is different from other RPGs with the exploration and battles. Sure, your three person party can talk to locals, shop for items and equipment, and customize your Gears with kick-butt weapons, but there are some new things as well. The most important is that exploration takes a bit of an action/adventure approach with the jump button. Yes, your characters can run and jump throughout the world of Xenogears. Towns and dungeons are full of hidden treasures that will often times put your platform skills to the test. The problem with the dungeons is that, even after rotating the camera around 360 degrees, you may not be sure where to go next or which piece of land can be jumped on. Also, falling down certain areas means you have to climb up again. Near the end of the game, this can be especially problematic when the areas are large. I felt the jumping acted as a gimmick to separate Xenogears from other RPGs. The game didn’t need that, especially with the unique and fun battle system.

You will get into random encounters and battle foes inside and outside of the Gears. Both battle modes were fun, but there was an unequal distribution of the two. There were far more Gear dungeons than non-Gear dungeons and near the end of the game, all of the dungeons were meant for Gears. In my opinion, battling outside of the giant robots was more fun. When you begin a battle, you can use an item, use magic, defend, or try to run away. Of course, you will be mainly attacking. Attacking is where the fun begins, as you are given a number of attack points for every turn. While attacking, each character can perform a set of unique moves, costing one, two, or three attack points. Certain combinations of moves will result in a killer move. It’s a bit confusing at first, but eventually anyone can get the hang of it. More special moves get learned throughout the game. Leftover attack points can be stored up and used to string together special moves into a supremely powerful combo.

If you are battling in your Gears, battles flow in a similar fashion but with subtle differences. In lieu of attack points, Gears come equipped with fuel. Each move requires 10, 20, or 30 fuel points, and combos require more. The defend option was replaced with the charge option that restores some fuel. There is also the booster option that speeds the Gear up for more frequent attacks but at a large cost of fuel. Also, Gear HP cannot be recovered with most healing spells or items. This means players have to be careful when they are away from an area that can refuel and recharge Gears.

“Dubble” Trouble.
The presentation of Xenogears is a giant conundrum. The sprites’ pixels need some polish yet they move fluidly. They are colorful yet lack emotion. The character art was stunning, but the same portraits get used all the time, no matter the mood of the situation. The Gears are impressive sights to behold, and the game features a fully rotatable camera in an interactive, 3D world. Many of these 3D areas are dark and hard to navigate, however. Battles feature some nifty special attacks and skills, but the loading times for them is a bit long. The game also features some well animated movie sequences, but the dubbing missed the characters’ mouths completely. Xenogears has some cool graphics, but certain aspects of them needed a bit of adjustment in order for the game to look its best.

Gear Jammin.’
It’s a shame that the game’s movie sequences don’t have subtitles. The voice acting is in need of serious work. This also applies to the battles. Only a few characters did a decent job at voicing the characters. Luckily, Xenogears has one of the best soundtracks in an RPG thanks to RPG maestro Yasunori Mitsuda. The overworld theme, the battle themes, the village themes, the…well…you get the point. This is one excellent collection of music.

Stand Tall and Shake the Text.
Overall, Xenogears was an interesting game to experience. Some gamers enjoyed it for the story, the exciting battles, and the music. Other gamers despised it for the way the story was told, the unequal distribution of Gear versus non-Gear dungeons, and the terrible dubbing. As for me? I saw both sides of the story. Needless to say, this game has some excellent ideas but it also has some serious faults. The biggest of these faults occurs on the second disc. Xenogears had a story that needed to be told in full and accomplishing this goal required the player to be force-fed gallons of text. Sure, the game has some graphical issues and some problems with the sound, but those flaws pale in comparison to the way the plot gets revealed on the second disc. However, Xenogears also features well-developed characters, an anime inspired setting, and fun battles. If you have the Temple Monk patience to read an endless amount of texts, then you should check out Xenogears and experience one of the most well written but poorly told stories of the Playstation era.