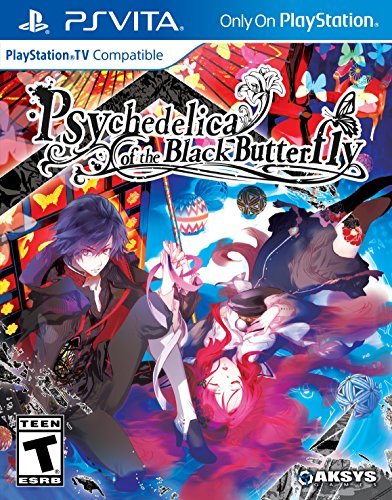 The more visual novels I go through, the more I appreciate their artistry. This is a niche genre that is able to tell a rich story relying only on words, still images, and the player’s imagination. Imagination is one thing that is overflowing in Psychedelica of the Black Butterfly. From the moment the game begins with a woman waking up in an abandoned, extravagant manor to the end when the people she meets start to unravel, the game is an emotional and imaginative tale. While it tends to have some confusing criteria for unlocking its many endings, the journey to reach any of them is enjoyable one. This is another visual novel I recommend to all fans of the genre.

As mentioned, the game kicks off in an abandoned manor. Looking like a relic from another century, the manor is filled with hidden rooms, elaborate spiral staircases, and stained glass windows. It’s also filled with amnesiacs. One is a young lady with fire engine red hair and a kind demeanor. At the start of the game, you learn that her name is Ai Minato (you can give her a different name). But, Ai doesn’t know this. The four men she suddenly meets don’t know their names, either. There isn’t much time for introductions because there’s one more thing in the manor: a monster that create life draining black butterflies. Things get even stranger when a gun materializes in her hands that lets her defend herself from the butterflies.

Did you get all that? The game starts off with a strange setting and stranger circumstances. While it’s still a visual novel with romance playing a pivotal role, Ai and the four men she meets need to figure out how they got to the manor, how to get out, and how to recover their lost memories. Why did guns appear in their hands? What are these monsters? How did they get there in the first place? There are many questions that will get asked and answered, all of which will be presented in typical visual novel format. The story is excellent. As is typical for this genre, you really get to know the characters and their importance for the overall narrative. During certain moments of the story, you’ll be presented with a list of choices that will effect various story aspects for the remainder of the game.

However, unlike other visual novels that encourage make multiple saves before or after a decision is made, Psychedelica of the Black Butterfly features a handy and intuitive flowchart that breaks down the stories chapters in an easy-to-follow format. Often times, you’ll be required to watch side stories in order to unlock more of the main campaign. This may sound like a drag, but they’re quite enjoyable. All of the side stories shed some extra insight on the characters and provide a distraction to the seriousness of the main story. Ai and the guys will talk about manga, siblings, cooking, board games, and much more. It will take some time to unlock the entire flowchart, but it’s an enjoyable process.

The flowchart allows you to go back, view, and/or unlock different routes without having to rely on multiple save files.

Another unique aspect in Psychedelica of the Black Butterfly is that there are times you can play a fun mini-game where you shoot black butterflies. Using either the touch screen or the control stick, you will need to target incoming black butterflies before they fly away. With the push of a button, you’ll fire a shot that destroys all of the targeted black butterflies. The more you vanquish at once, the higher your score. If this doesn’t sound like your thing, you can skip it entirely and move on.

Aside from that, the game is typical visual novel stuff. As you read page after page of conversation, you’ll witness gorgeous artwork in the foreground and background. Ai and the handsome beaus are dressed in elaborate garbs consisting of elegant fabrics, patterns, and fits. I remember spending a few seconds looking at all of the fine details on everyone’s outfit just to take all of it in; the artist went all out. Sometimes, there will be still images that show the more intense or important story sequences. You can view all of these in the gallery. Take advantage of this; they’re quite beautiful. The music is one area that’s lacking, but it’s not a deal breaker. You’ll be doing more listening to the Japanese voice acting than the background music, anyway.

Before I knew it, I unlocked the bad ending. Thanks to the handy flowchart, I went back to a key event in the story and managed to get a few of the character endings, as well as the dubbed “Best Ending.” All of this only took me about ten hours. I may go back and unlock other endings, but like other visual novels, Psychedelica of the Black Butterfly can get overly wordy. There are times when getting a desired ending has some unclear criteria, so you’ll be going back and forth to the flowchart often. No matter how much you do, there is some great stuff in Psychedelica of the Black Butterfly. This is yet another visual novel that I recommend to all fans them. The unique setting and imaginative story are what sets it apart from others, as does its handy flowchart and shooting mini-game. The Vita truly is the system to get for visual novels, and Psychedelica of the Black Butterfly is another one to enjoy.

Overall, 8/10 – Psychedelica of the Black Butterfly has the typical goods of a visual novel, but the way it handles them with its otherworldly setting cause it to stand out for all the right reasons.