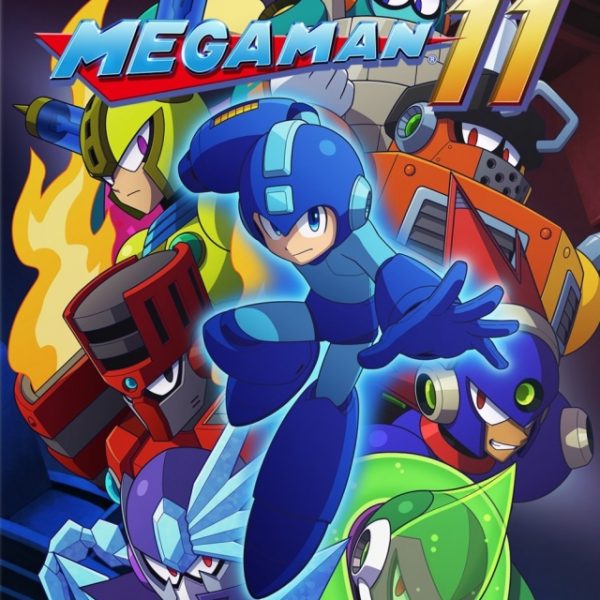 Mega Man 11 is terrible. Seriously. It’s one of the worst Mega Man games I have ever played. For context, here’s a list of thing I’d rather do than replay Mega Man 11:

Go to the dentist and learn that I have a cavity.

Get my oil changed and learn that my transmission has been borked.

Remove gum from a pair of shoes that I just bought.

Drink coffee from a K-Cup.

Get the picture? Maybe you will after getting into the nitty-gritty of the review. Prior to playing the full game, I played the demo featuring Block Man’s stage. That should have been enough to warn me. But! I gave it a chance. Maybe Block Man’s stage would be “that one stage” that every Mega Man fan puts up with just so they can enjoy the rest of the game. Mega Man 2 had Quick Man. Mega Man 8 had Frost Man. Alas, no. Block Man’s demo was a warning to stay away. No matter how much of a Mega Man fan you are, you owe it to yourself to avoid Mega Man 11.

There are two big issues with Mega Man 11: music and controls. Both of these are crucial this series. Ih ‘ll talk about the more subjective issue first, which is the music. Usually, Mega Man has tracks that stay with you for the rest of your life. Think of your favorite Mega Man entry – did you just start hearing your favorite song in your head? Mega Man 11’s music isn’t bad. It’s easily forgotten. Tunes blend into the background as if they’re an afterthought. In some way, it’d be better if the music was memorable for all of the wrong reasons instead of being disconnected. Music played an important role in this series before. What happened now? To top it off, Mega Man’s voice actor sounds like a whiny sissy. I know that sounds crass, but that’s the best way to describe his voice acting. The rest of the voice acting is fine; sometimes it’s quite entertaining. The Robot Masters have hilarious catchphrases that exhibit their namesakes.

Speaking of, Mega Man 11’s story is one that is all too familiar to fans of the series. Dr. Wily is back and has recovered a device from his past to control new Robot Masters. Mega Man needs to stop him and save the world and, yeah, all that jazz. This has been done before. But, there are some interesting moments where the story will cut to flashbacks of Dr. Light and Dr. Wily in their younger years. There’s a surprising amount of exposition here. 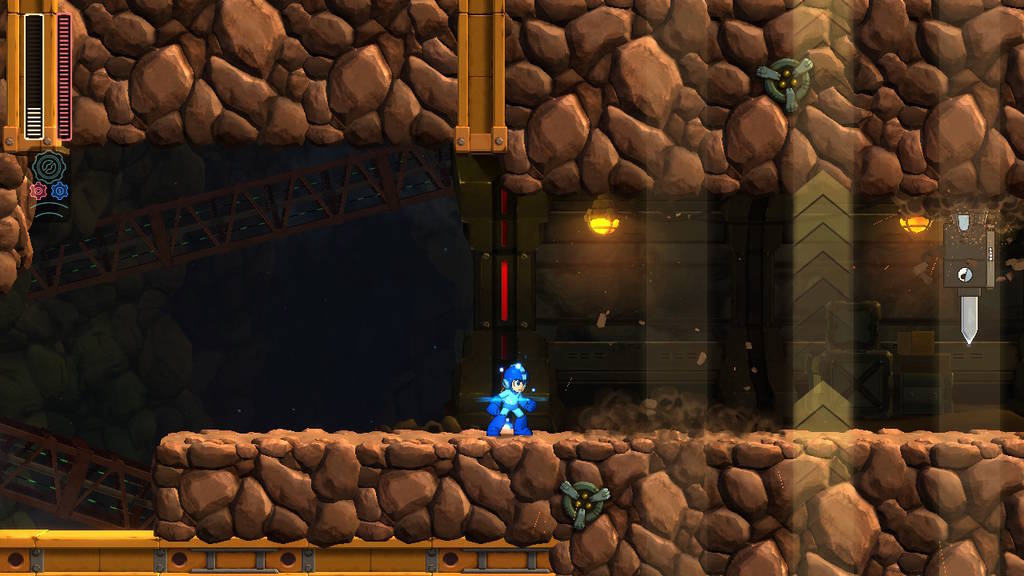 Mega Man 11 has its faults, but graphics aren’t one of them.

The game looks great. Mega Man 11 feels like you’re in control of your own Mega Man cartoon with its crisp sprites and color cornucopia. Despite the majority of the stages being terrible, I can’t fault their looks. Something that I really appreciated were the subtle additions that only the keenest of eyes will catch. In Acid Man’s stage, you can see Acid Man slowly stalking Mega Man as he progresses. In Bounce Man’s stage, you can see some highly detailed 2D physics as Mega Man hops on multi-colored rubber balls.

But, that brings me to the core of all things Mega Man: gameplay. *sigh*Where to begin with this? Let’s first look at the stages. This is where you’ll be spending most of your time. Stages are long. Too long. Plus, they rely on instant death gimmicks. It’s a terrible combination. I played on Normal difficulty and experienced more game overs due the level designs more than any other Mega Man game COMBINED. Now, there are things you can do to help balance this issue. Similar to Mega Man 8, there is a shop where you can use Bolts to buy items that Mega Man can equip. Unfortunately, on Normal mode, the game is balanced around this. In other words, you’re expected to farm for Bolts so you can increase Mega Man’s chance for survival. On Normal mode.

The thing is, it looks like Mega Man would be equipped to tackle anything. His Mega Buster, jump, slide and Rush options are back. Plus, he has a new ability called the Double Gear. With the push of a button, you can slow down time with the Speed Gear or increase Mega Man’s power with the Power Gear. Or, you can use both in a last minute desperation attempt. Both of these options take some getting used to and can leave Mega Man vulnerable if they overheat. Eventually, you’ll be using these just to get the damn game finished. Power Gear is (thankfully) broken because it powers up not only the Mega Buster, but all of Mega Man’s acquired weapons. Speed Gear slows things down to a crawl. Once activated, they only last for a few seconds. But, it’s enough to wreak havoc on your enemies.

But, remember how I said that core of a Mega Man game is the gameplay? When I think of this series, I think of great music and exceptional gameplay. Gameplay includes controls. More often than not, Mega Man 11 will not respond the way it should. Poor Mega Man lost so many lives due to a jump getting eating or not sliding when he should have. Perhaps this was just an issue on the Switch version. When I would tell Mega Man to do something, there would be times the game said, “Lawl, nope.” This is Mega Man, yo. This is unacceptable for this series.

So, is any part of Mega Man 11 fun? Naturally, the one-on-one fights against the Robot Masters are enjoyable. Also, I really enjoyed swimming through Acid Man’s stage and skating through Tundra Man’s stage. But, since a good chunk of your time will be spent trying to survive the length of each level, moments of fun are scarce. One stage in particular deserves a special mention: Bounce Man’s. Most people dub this as the worst level in the game due to the fact that you have little control over how Mega Man literally bounces from screen to screen. Now, some “gamers” will probably tell its haters to, “Git gud.” That’s not an excuse for shitty level design. The majority of the stages in Mega Man 11 are bad. But, it was Bounce Man’s stage that made me shelf the game permanently after finishing it. 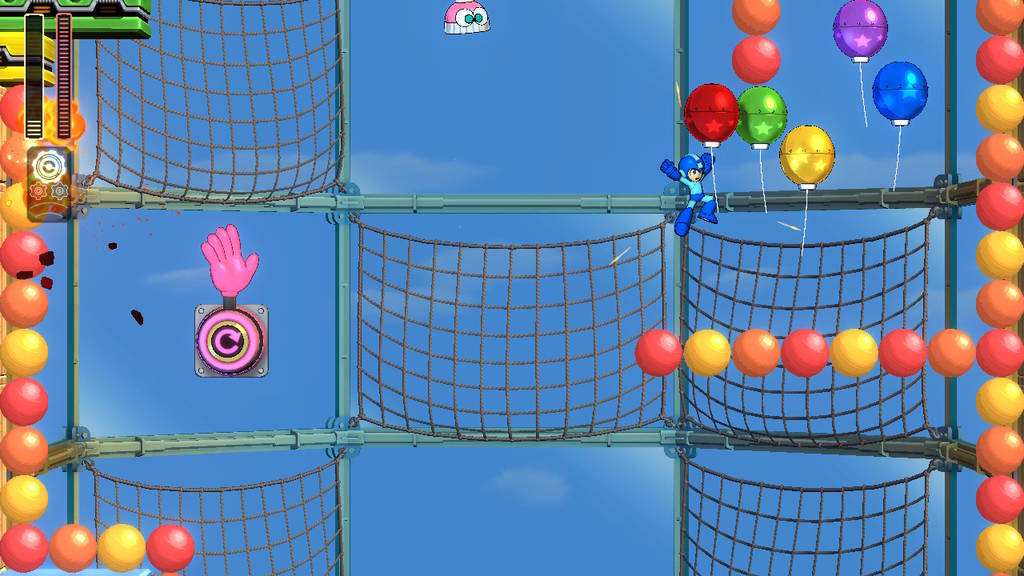 After I dealt the final blow to Dr. Wily, I watched the ending and turned the system off. There are extra challenges that could extend the game’s time: speedruns, limited item usage, boss rushes, and so on. But, I won’t be touching any of them. I have no plans of  trying Mega Man 11 on a higher or lower difficulty. I won’t play it again so I can enjoy Tundra Man’s or Acid Man’s stage. Aside from plugging the hell out of this review to spread the word, I won’t be doing anything with Mega Man 11 ever again. I still adore this series. I still enjoy going back to older titles. Mega Man 11 made me realize just how much love I have for those older titles.