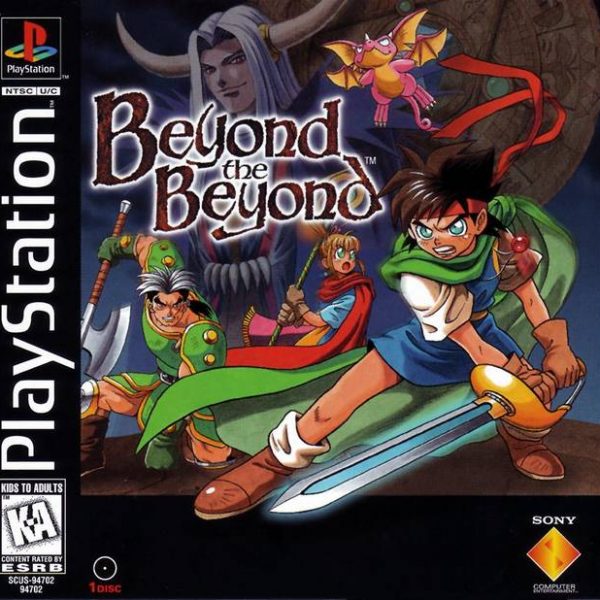 Howdy, gamers. If you’re familiar with my work (lawl) then you might remember that I had a review written for Beyond the Beyond. The title of the review was something along the lines of, “It’s that bad.” Full disclosure: that review was unfair because my time spent with Beyond the Beyond totaled about a half hour. Honestly, that review was written because I wanted to fill my review count. So, it’s been removed.

Beyond the Beyond has a reputation. It lives in infamy among most gamers. Just mention the title to gamers of a certain age, and they’ll cringe. But, there are a few out there that absolutely adore this game. It takes all kinds. Now, trust and believe: this game has problems. Guess what? Other games that are held in much higher regard have the same problems. In this review, I’m going to go through the game’s problems in a Fact or Crap manner by addressing its most common complaints.

Fact or Crap? “The story is bland and generic!”

Beyond the Beyond takes place on the continent of  Aridia. Years before the journey begins, the continent was getting wrecked by a war between the Beings of Light and the Warlocks. Before the war turned Aridia into a wasteland, a truce was called. The Beings of Light would remain above ground in the Common World, and the Warlocks would venture beneath to the Underworld. Today, the Kingdom of Bandore is causing strife in the Common World. Is it for power? Or, is it for something greater? A scrappy youth named Finn and his friends need to stop Bandore from disrupting the peace of Aridia.

Bland? Nah. Generic? Nah. In fact, the story in Beyond the Beyond is a classic one you’ve seen before. I liked the story…when it was occurring. The problem with Beyond the Beyond’s story is that there isn’t much of it. Dialogue sequences are brief, there is little character development for anyone aside from Finn, and you can get by the entire game without learning anything about the villains. So, while the story isn’t bland or generic, it is thin and underdeveloped. The complaint above is crap. 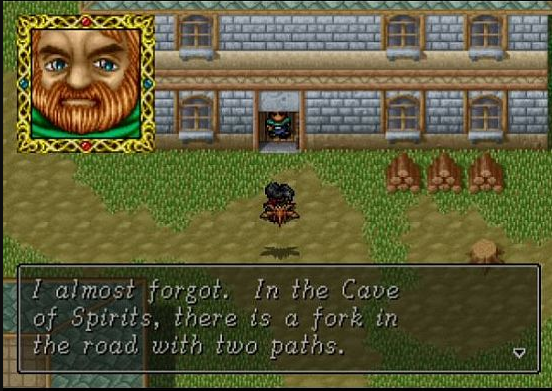 Unfortunately for you, forked paths are in every dungeon. Graph paper might come in handy for most of them.

Fact or Crap? “The random encounter rate is a disaster!”

Before getting into this complaint, let’s look at Beyond the Beyond when you’re not battling. The game has the look and feel of a basic yet familiar RPG. You take control of Finn and his friends as they go from town, to the world map, to a dungeon, and so on as they advance the minuscule plot. In towns, you can shop for goods, save your progress at the church, rest at an inn, and talk to the townspeople. It’s typical stuff. Once you set foot outside the safety of a town, you will need to ready yourself for combat. Battles are random, and they occur at a very frequent rate. You can take as little as three to four steps and find yourself in another battle. This isn’t a big deal in the earlier areas, but when you get to infamous dungeons like the Sand Caves, the frequent encounters will start to get to you. So, this is indeed a fact. However, the encounter rate is no less frequent than other games that don’t have Beyond the Beyond’s reputation: both Breath of Fire II and Tales of Phantasia have similar encounter rates, but people aren’t dousing them with Haterade.

Fact or Crap? “You have to grind just to survive the random encounters!”

Battles are standard, turn-based affairs. At the start of a round, you pick what your teammates will do. Then, the battle plays out. Rinse, wash, repeat. You can attack, use items, use magic,  or attempt to run away. After the battle ends, you’ll gain experience points. With enough experience points, you characters will level up. You’ll want to level up as much as possible because this is one of the most difficult RPGs out there. Indeed, grinding is a necessity. Even when you do gain a few levels, you’ll see a discouraging amount of growth. Whether or not this was intended is up for speculation, but the bottom line is that the game doesn’t pull any punches. There are some things you can do to have more successful battles. For instance, you can (try to) take advantage of the Active Playing System. By mashing the X button, there’s a chance your character will attack twice, perform a critical hit, guard an attack, or perform a counterattack. Another option is unlocking your character’s advanced classes. This will give your team a much needed advantage. But, until you get to that point, get ready for a challenge. The grind is real, and the grind is a fact. That said, this is something that any RPG fan worth his salt is used to. Sometimes, you have to grind to survive. Beyond the Beyond is no exception. 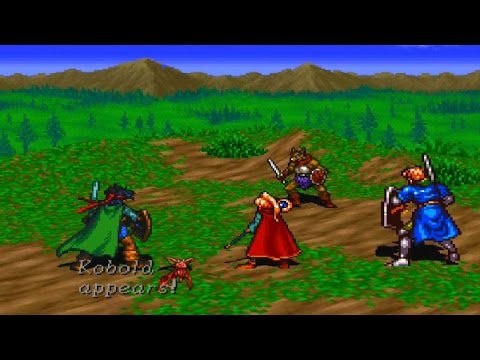 See this screen? These are what battles look like. Get used to battling. A lot.

Fact or Crap? “For a good chunk of the game you have to carry around a cursed party member who can’t actually fight.”

This is another common complaints that got butchered through time. This is both fact and crap. Yes, one of the characters gets a permanent curse on him. No, the curse doesn’t last “a good chunk of the game.” No, the cursed party member isn’t unable to participate in battle. In Beyond the Beyond, someone who has been cursed may miss a turn or take damage after their turn. For one party member, this is permanent for about four to five hours. Now, don’t misunderstand: it’s not pleasant. It makes the first parts of Beyond the Beyond a struggle to enjoy. But, the real kick in the nuts is that the character shows zero improvement after his curse is removed. That’s the real issue. The good news is that after the curse is removed, you can replace him.

Fact or Crap? “The only good thing about the game is the music!”

I’ll get this out of the way now: crap. Beyond the Beyond’s music is fantastic, but there are other positives. The game’s 2D field presentation and 3D battle screens are pleasant. They hardly use the full power of the PlayStation, but they work. I think one of Beyond the Beyond’s most unsung positives is that it’s one of the most rewarding games to finish. The high encounter rate, the lack of direction for plot advancement, the brutal difficulty from the bosses, and other “flaws” make this a game that even seasoned gamers will find challenging. Want some bragging rights? Try finishing Beyond the Beyond. Personally, I finished it in 30 hours.

Fact or Crap? “It’s that bad.” TL;DR answer: crap. Beyond the Beyond is not a good game. But, it’s not the worst. I can name other RPGs that have little guidance, frequent random battles, required grinding, and sparse stories. By the time I finished the game I was jumping for joy for a few reasons. One reason was that I finally finished a game that had me morbidly curious since it’s debut. A second reason was that I finished one of the most demanding games, ever. A third reason was that I won’t ever have to play the game again. I don’t recommend Beyond the Beyond unless you are an RPG fan that is seeking a challenge and has exceptional patience. Everyone else should stay away.

Overall, 5/10 – Beyond the Beyond is riddled with problems. They aren’t game breaking, but they can be enough to make RPG fans drop it. Other than a badge of honor, you aren’t missing much by avoiding it.