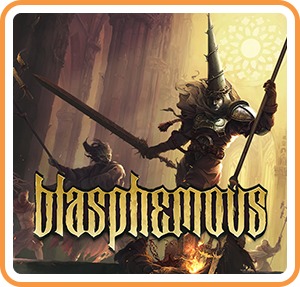 One of my favorite memes circulating the internet shows Tyra Banks screaming, “We were all routing for you!” at whatever the meme creator inserts on the receiving end. Having finished Blasphemous, someone should use said meme and put Blasphemous and its developers on the end of Tyra’s wrath. A resurgence of 2D, pixelated metroidvanias has been crowding the market, but Blasphemous looked like it would be the pinnacle of all of them. I felt this way for the first third of the game. And then, Blasphemous started showing its true colors. Blind drops into spikes and pits. Taking damage from parried attacks. Stun locking. Goddamn stun locking. I could go on. In fact, I will. This is a review, after all. Blasphemous is a fun game, but one thing is clear: the level of gameplay does not match the level of aesthetics.

Actually, let’s begin with aesthetics. Blasphemous is a gruesomely beautiful 2D game filled with Catholic symbolism, oceans of bloodshed, and the biggest collection of coneheaded characters ever seen. Heavily inspired by Spanish artwork and the Dark Ages, everywhere and everything in Blasphemous is a site to behold. If you do play it, I urge you to stop and take in all the sights when you enter a new area. It’s clear that the artists went all out in adding as much as they could. It’s quite beautiful. The game is in 2D, but that doesn’t mean the violence is any less than something in 3D. If I had to gripe about one thing with the graphics, it would be the game’s font. It’s difficult to read. The voice acting is hit or miss. The music feels equal parts haunting, pleasant, and scary. It’s a solid mixture of guitar and piano instrumentation that make the game’s world feel more alive. Sadly, the boss tracks are repetitive and lack excitement.

Similar to Dark Souls, one of the games that inspired it, Blasphemous’ world is filled with lore that players need to piece together themselves. You play as The Penitent One, a silent warrior with a massive, silver conehead helmet that has entered the region of Cvstodia. It’s an unpleasant area filled with pious villagers and horrific monsters that everyone and everything attributes to something simply called the Miracle. Death? The Miracle. Bizarre mutations? The Miracle. Famine? The Miaracle. The reason for The Penitent One’s journey? Yep, it’s the Miracle. His journey will take him all over Cvstodia. Each area has a fascinating history if you know where to find it. Otherwise, the story in Blasphemous is barebones. There’s a hefty number of NPCs that offer insight to The Penitent One, but again, players are rarely told anything directly.

There’s more narrative than usual for the subgenre, but the main draw to Blasphemous is the 2D action and platforming. From the start, Blasphemous throws you into it with a boss fight and only two healing items. The Penitent One wields a great sword called the Mea Culpa. He’s able to slash this way and that, perform a dash that sometimes works as a dodge, parry, and jump a modest distance. He also has access to spells called Prayers. The Penitent One’s capabilities are serviceable at first. Over time, you’ll discover collectibles upon collectibles that power him up. These aren’t just limited to an increase in health and magic. Rosary Beads provide him with passive benefits. Relics grant him new abilities that let him access new areas. The Mea Culpa can get an attachment that grants him a benefit, as well as get powered up with in-game currency from defeated enemies. In other words, there’s lots to find. During the first part of the game, finding these goodies is exciting. Hell, everything is exciting. Striking down enemies with that giant sword or a fanciful finisher is satisfying. If you die to a boss or a mistimed jump, it’s relatively easy to get back to where you were and try again. Death in Blasphemous simply reduces your magic meter. To get it back, simply return to the place you perished and reclaim it. There are even statues around Cvstodia that let you bypass this for a fee.

Eventually, Blasphemous goes from a fun romp to a slight chore. It starts with the issues I mentioned in the introduction. Blind drops into spikes and pits aren’t anything new for a game like this, but Blasphemous takes it to an extreme. Transitioning to another screen while you move at the Penitent One’s normal pace can result in instant death. Some attacks can be parried, but in doing so, the Penitent One will get knocked back and might take damage. And of course, there’s the stun locking. It’s inexcusable and has no place in a game made in 2019. Let’s go over some other minor annoyances that amalgamate into major problems. First, the world is too big. With so many things to collect, that size feels more and more apparent. There is no way to warp to save points. There are only five warp points. You can’t mark locations on the map in case you want to explore them later. And on, and on, and on. I won’t even get into the game freezing glitches or the rare moments when the controls decide to just not respond. The bottom line is that Blasphemous needs extra polishing because it gets frustrating for all the wrong reasons.

Getting to the end of Blasphemous can take about 10 to 20 hours for a first time. Having played the game mostly blind, I intend to go back at some point and start a file where I have a guide at my side. There’s a lot of stuff to overlook when it comes to getting 100% map completion. Knowing that I intend to return hopefully makes readers aware that Blasphemous is a fun game. It’s just not the game that had everyone so atwitter since it’s announcement. It could have been had the developers spent as much time making the functionalities of the game match the quality of the aesthetics.

Overall, 6.5/10: It’s hard to appreciate a game that draws inspiration from Castlevania and Souls when you’re drowning in annoyances that should have been avoided.