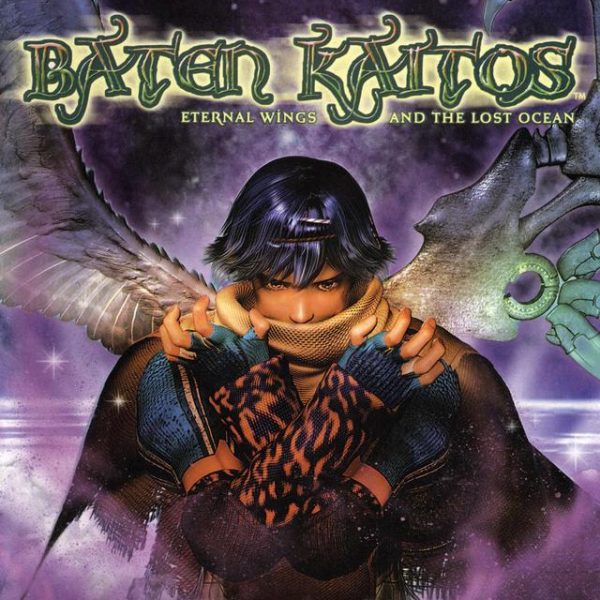 The saying quality over quantity could not be more true for the Game Cube’s RPG library. You could count the number of RPGs available on two hands whereas the Playstation 2 has more than you know what to do with. That said, a fair amount of the RPGs on the PS2 have been flops. On the other hand, the RPGs available on the Game Cube have been spectacular titles that deserve to be played and praised. My latest RPG adventure is the fantastic Baten Kaitos: Eternal Wings and the Lost Ocean. The first time I heard of this long-titled RPG was during my first adventure with Tales of Symphonia. While 180 degrees from it, BK is an RPG that everyone needs to experience due to its creativity, splendor and setting.

The world of Baten Kaitos takes place in the sky. Years ago, the world existed on the ground until a battle waged between humans and the god of darkness, Malpercio. After the war, the various continents went airborne and humans began growing wings. New life forms began to emerge and the legend of the earth and the ocean that surrounded it got lost to time. Now, some despicable forces are trying to resurrect Malpercio for all of the wrong reasons and heroes need to come together to prevent that from happening. The leading hero is the blue-haired, smart-mouthed, one-winged youth named Kalas. With the aid of a Guardian Spirit that you, as the player, get to control you need to guide Kalas and his friends on an adventure through the skies. The story has an original setting with more lore and legends than ancient mythology. Alongside this truly magical world are Kalas and the rest of the crew. Xehla, who has a wonderfully similar appearance to the Nina in Breath of Fire III, is a fantastic heroine and leading lady. Everyone else has their quirks and personalities that grow throughout the course of the game. All of this and plenty of twists come together to form a narrative that is well worth 50 hours.

And that’s just the beginning of BK’s greatness. Before getting into the most unique aspect of it, I think it’s important to point how stunning the game is to both the eyes and ears. The soundtrack is totally worth hunting down and owning. Motoi Sakuraba created something that shows off his style, yet is full of original sounding tracks that fit each scenario and circumstance perfectly. Again: if you get the chance, hunt down the soundtrack. If I haven’t convinced you yet, at least listen to a few of the tracks and you will be immediately hooked. Then there are the graphics…ye gods the graphics. This is just a beautiful game all around full of pre-rendered glory. Picture this: the first town of the game is nothing but a farming village. But, the amount of detail, texture and color in this village is enough to get you ready for the rest of the gorgeous game. There are huge flowers blowing in the wind and a variety of animals doing their thing. That’s just the beginning, too. There’s a village made of candy, a village that’s like a picture book, a city made of gold, and a city on a waterfall. There is a dungeon of mirrors, a forest of bioluminescent spirits and even a castle that is inspired by the Tower of Druaga. The variety mixed with creativity and enhanced by the Game Cube’s graphical power makes for one of the most stunning RPGs of all time.

By now, you are likely wondering if all of the glitz and glamor is attempting to cover up an RPG that doesn’t play well. Luckily, Baten Kaitos features game play that is just as original as the rest of the game. The world of BK is centered around Magnus; magical cards that trap the essence of anything and everything. This means food, water, toys, maps, hair care products and anything else you can think of is used with Magnus. Magnus can be used outside of battle as items to light fires, clean windows, nurture flowers and a variety of other tasks that reward you with new Magnus. Magnus with food in it will go bad over time and turn rotten, water will turn stale and flowers will wilt. Most importantly, Magnus is used in battle. You get to equip Kalas and his team with a deck full of Magnus that fits your liking. Instead of equipping a sword, Kalas will equip a variety of sword Magnus of various shapes and sizes. Everyone else will have a variety of weapons and armor to equip. They can also equip restorative items, a camera to snap pictures of enemies, and other miscellaneous objects that help in battle. Snapping a picture of a monster is needed because monster don’t leave money. Instead, you need to sell pictures. This might sound odd, but I was never without funds and by the end of the game I had more money than I knew what to do with.

Actual battles will seem strange at first, but they are original and intense. You begin by walking into an enemy. Agility determines turn order. Your characters’ decks that you created get randomly shuffled and you need to select cards to use to attack the enemy or support your ally. At first, you will only be able to use a few cards per turn. As characters grow in classes, they will be able to add more to their deck and use more cards during their turn. Many of the cards have elemental properties. This adds a level of strategy to the game because using a fire card with a water card, for example, in the same turn will result in less damage. This is true even if the enemy is weak to one of those two elements. The rest of the elements are light, darkness, wind and chronos. That last one is just a fancy of saying earth. A few Magnus are special attacks made for each character that will immediately end the turn but deal considerable damage. When an enemy is attacking you, you have the opportunity to select defensive Magnus and attempt to mitigate damage. Once again, taking elemental properties into account will let you lessen the damage. Kalas also has the potential to unlock special Magnus in the middle of battle as long as you respond to questions properly.

The battle system of Baten Kaitos requires the preparation of strong decks, but also involves luck. Regular battles can take longer than necessary if your initial hand has nothing but armor and restorative items. Bosses have a tendency to target a character who lacks any armor Magnus in their current hand. While luck is a factor, building a good deck for your characters is the best way to achieve victory. One final thing to point out that adds a huge benefit in battle are the numbers located on each Magnus. If you combine the Magnus in such a way that they create a straight or two or more of a kind, the damage will be increased dramatically. Baten Kaitos sounds a bit confusing, but after a few battles it is easy to catch on and plan accordingly.

This is an RPG that seems to have it all, but there are a few issues with it that should have been addressed. The first is how your characters level up. While they gain experience, you have to cash them in at a blue save point which means you need to backtrack to a town. Red save points just let you save. Speaking of saving, there are times when the exposition will get drawn out for hours. RPGs 101 says that after a grueling boss fight, you need to save. The last thing you would want to do is deal with more text. Long winded explanations could have been downsized dramatically, too. Another issue is that the voice acting is abysmal, but you are given the option to turn it off outside of battle. Finally, you can’t pause the game during a battle sequence. These issues aside, Baten Kaitos is an imaginative and inspiring RPG. With 50 hours of regular game play, 1000 Magnus to find and a huge variety of side-quests, it will keep you playing from the moment Kalas wakes up to the end of the credits. If you need a new RPG that in which the developers took chances that paid off, you need to look no further than Baten Kaitos: Eternal Wings and the Lost Ocean.