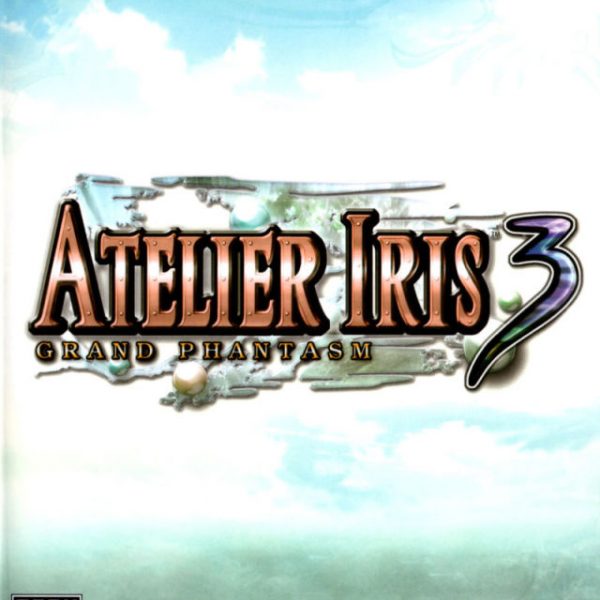 Author’s Note: This review was originally published on July 20th, 2007. Like other reviews of the time, this one features “witty” taglines that separate each section. Atelier Iris 3 won me review of the month, so I have a special place for it in my heart.

I enjoyed Atelier Iris 2 from start to finish, so Atelier Iris 3: Grand Phantasm had some big shoes to fill. After playing the game the whole way through, I will say that it is nowhere near as enjoyable as AI2. However, the third Atelier Iris was still a super-fun RPG experience. It may not have lived up to what I was hoping for, but fans of the series or those looking for a light-hearted RPG will do well in playing AI3.

We Are Raiders!
In the world of Zey Meruse, the Guild hands out various jobs to adventurers known as Raiders. Their tasks can range from delivering a message, or traveling to the farthest reaches of an Alterworld. Alterworlds are areas connected to Zey Meruse, which can only be entered with the use of mysterious portals. Two Raiders, Edge Vanhite and Iris Fortner, have begun to make a name for themselves as Raiders. Iris, an alchemist in training, can often be seen carrying around a mysterious, sealed book called the Escalario. Supposedly, the Escalario can grant any wish. During a quest, a brilliant gem gets locked into the Escalario and Iris gets transported to a mysterious zone. When she returns, Iris and Edge learn of the book’s potential. The two of them decide to brave the various Alterworlds in search of the remaining gems.

The synopsis may sound unoriginal. This is understandable; you are looking for eight gems that can grant any wish. However, you will meet a variety of characters whom not only make Edge’s and Iris’ job more difficult, but they’ll show you more about the true purpose of the Escalario. These revelations still don’t make the plot totally original, but they add to the enjoyment of progressing through the story. Naturally, I enjoyed moving forward with the tale. Luckily for those turned off by the idea of an unoriginal story, the characters you encounter, as well as your main characters, come with plenty to say. The humor factor returned once again to this Atelier Iris game, and some of the conversations you see will give you a chuckle or two.

Grand Graphics!
During these various conversations, wonderful, full-size character portraits will be shown depicting the mood of the characters. These were beautiful, and had variety. Outside of these beauties, the setting of Atelier Iris 3 is gorgeous for the most part. Some of the Alterworlds have bland areas, but overall the places in which you travel are colorful and interactive. The character sprites are 2D, as expected, and they look just as great as they did in Atelier Iris 2. When in battle, your characters, the monsters, and the variety of special attacks and magic spells look amazing.

Monsters! Let’s Fight!
On the subject of battles, I should explain to you the amazing Active Cost Card Battle System. The battle is turn-based. As Edge runs through the Alterworld, he will see monsters roaming around. If you run into one, a battle begins. You can also slash with Edge’s sword and get initiative. When you enter the battle, you will see the turn order on the top. Each character, monster, and skills that activate over time, are shown. The rest of the cards are left blank. There are 16 cards total. If you finish the battle quickly, your Alterworld time does not decrease, but I’ll talk more about that further into the review.

Empty cards that reach the end of the bar on top will go back to the left end in order. When a time-skill reaches the end, it activates. When a monster icon reaches the end, the monster attacks. When one of your team members gets to the end, their turn comes up. There are various things in battle you can do. While Iris cannot make items on the fly, she can summon Mana spirits found in the previous games. Your other characters have a variety of skills they can use, which change depending on the Blade currently equipped. A Blade is an essence of an elemental spirit that changes not only the character’s skill set and weapon choice, but also their entire appearance. Use the Plua blade for Edge and he becomes a speedy ninja. Use the Siren blade on Nell, your third character, and she becomes able to summon monsters to battle. You gain new blades as you progress, and you earn Blade Points at the end of the battle which allow you to learn new skills. Besides skills and magic, you can attack, defend, and use items.

When your team gives and receives damage, your skill gauge goes up. In AI2, the skill gauge would always start at one. However, in AI3 the skill gauge will stay at whatever number it was at the battle’s end. Not only that, but it will slowly go up as you walk around the field. Anyways, the highest the skill gauge can go is 9. Your team shares from the same pool, so it is very important to use skills effectively.

When you damage a foe, a gauge on the bottom of the screen fills up. Once the gauge reaches the end, you enter Burst Mode. When this happens, your skill gauge goes to 9, all of your enemies become stunned, and damage increases significantly. When you attack your enemies, you begin a chain. The higher the chain, the more rewards you get at the end of the battle. Since receiving damage during Burst Mode will cause the burst gauge to decrease, it is very important to use your most powerful skills in hopes of defeating enemy, or at least delaying the turn of the enemy.

Even though the game is easy, you will have plenty of opportunities to use various Blades, play around with skills, and enter Burst Mode to wreak absolute havoc on your foes. Some secret bosses can be troublesome, but overall this game lacks any challenge.

Hi-ho, Hi-ho, It’s Off To The Alterworlds We Go!
Before you leap head first into the battle system, you will have to go to the Guild and obtain quests. Normal quests are accomplished after you finish a certain task. These are the most important quests as they grant you Quest Points. When you earn enough Quest Points, your rank goes up and you are able to enter Mission Mode. When in Mission Mode, you advance the story. Once the mission is finished, the chapter ends and you can start going on quests again. There are two more types of quests. Fetch quests require you to deliver a certain item to someone. Finally, combat quests require you to kill a foe, or a certain number of monsters. All quests reward you with items, money, or a new recipe.

These recipes allow Iris to make new items. By following the recipe exactly, you will create the intended object. However, when you interchange items, you can create something new. As you create more stuff, Iris will gain progress on a meter. When the meter reaches the end, her alchemy level will go up and she’ll get a stat boost. Most importantly, she’ll get ideas for new recipes. As you travel around, you will find objects that inspire Iris to make something based on what she sees. A humorous conversation initiates when she becomes inspired to make something new, which is always an added perk.

When you are not blowing up the alchemy lab, you can run around Zey Meruse and talk to the locals. There are various shops and sites to visit, too. However, most of your time will either be at your work shop or in an Alterworld. Just beware, because your time in an Altewrold is limited. On the right hand side of the screen is a timer. When that timer reaches the end, you will be taken back to your house. This time limit adds a sense of excitement to the dungeon exploration. Luckily, you can find items that increase your time limit. There are also plenty of treasures to find. You can even knock down all kinds of obstacles, plant seeds that turn into various types of flowers, or fish at a water spot. With so much to do, it boggles the mind as to how you have time to fight monsters and finish quests.

When you exit the Alterworld, you will get an evaluation. By fulfilling certain requirements, you will get points. There are multi-colored crystals you can find, which give you points as well. When you get enough points, you will earn some reward items. While this game may be more of a dungeon crawler than the previous two Atelier Iris’, the exploration and progression were done exceptionally well.

Say What?
Probably the only downfall to the game, besides the lack of replay value and challenge, is the sound department. The music was average, at best. I remember Atelier Iris 2 having some great tunes, yet number three seems to have taken a step backwards. While the opening and ending tracks were excellent, everything else needed an instrumental upgrade. Voice acting, once again, could be chosen as either English or Japanese. Regardless of which you chose, the acting was done well enough to not make you turn the sound off.

When Will I Raid Again?
As mentioned, the replay value is seriously lacking. You get only three characters, and you can easily accomplish all of the quests in one game. There are no bonus quests for beating the game once, and the extras you obtain are nothing you haven’t seen before from a game created by Gust. It is hard to say when I will play this game again. Hell, I may never even touch it again. But, for the 50 hours that I did spend on it, the time was well worth it.

Atelier Iris 3 lacked the punch that made the AI2 so captivating. However, the experience was still fun from start to finish. The only problems the game had were with music and replay value. To some people, these can be easily overlooked. In the end, Atelier Iris 3 did what both games did for me thus far: provided me with an entertaining quest with fun characters, and plenty of exciting item creation and battling. If you liked the first two Atelier Iris game, you will most certainly like this one. However, do not expect to relive the magic of the second game.