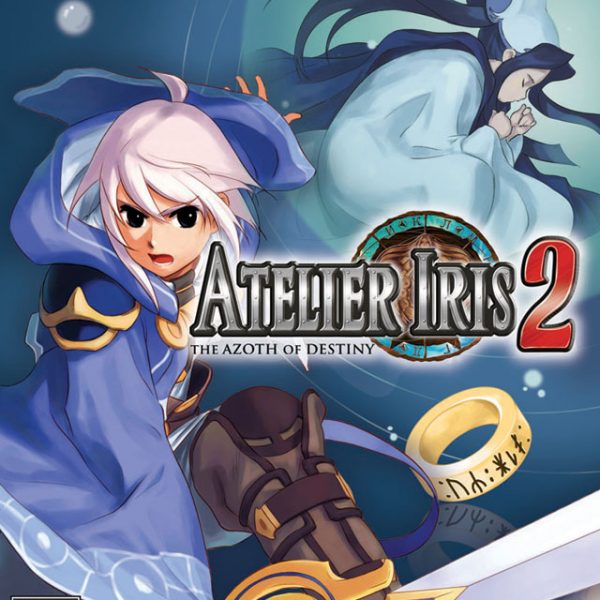 This review was originally published on July 16th, 2006. This is a special review because it was one of the first times I started playing around with taglines for each section. I still feel that Atelier Iris 2 is a perfect game because it hits all the right notes.

At first glance, Atelier Iris 2 looks like an old-school game with some new-school stuff added on. In actuality, AI2 is so much more than that. I could not put this game down the moment I started playing it. With all of the other RPGs I’ve played, this is the one that has everything I want that makes a perfect RPG for me. For those of you who have played the first Atelier Iris you’re in for new surprises and for those craving an RPG, your search ends here.

An Alchemy Tale
The Atelier series has always revolved around the ideas of alchemy. This game is no exception. Unlike the earlier games, however, this is a more linear type of quest with developing characters who have their personal story. The two main characters are Felt and Viese Blanchimont. Orphaned at an early age, Felt and Viese grew up as brother and sister despite not being related by blood. They live in the world of Eden, located high in the sky and blessed with mana spirits. Eden has no monsters and no wars, but still Felt prefers to practice swordplay rather than study like Viese. After Viese becomes an alchemist, her and Felt witness Eden begin to crumble. As if by chance, a scared sword called the Azure Azoth calls to Felt to got the world below Eden called Belkhyde. Felt takes the sword and travels to the new world to find out the cause of Eden’s destruction while Viese continues to study alchemy to assist Felt in any way she can.

There is actually more to the story’s introduction, but I won’t go further, as much as I want to. Obviously, I loved the entire story from start to finish. Not only was it more exciting and climatic than the first AI, it featured some of the most endearing characters in any RPG. Besides Felt and Viese, you’ll be introduced to a colorful cast of characters who all have an interesting story to tell, and very fun dialogue to speak. Besides learning about Eden and Belkhyde, you learn about the great characters that make up the two worlds and get to watch their relationships with each other grow. And yes, the title of the game holds true because Iris is actually a character (non-playable, mind you) in the game whereas in the first game you only caught a glimpse of her. Anyways, the story has many funny moments and serious moments. No matter what mood, however, you’ll be glued to the screen as the tale unfolds. The twists and turns, climatic moments, and the new discoveries encountered put together and exciting plot from start to finish.

Making Those Items
Staying true to its roots, AI2 features plenty of items to create from hundreds of raw materials. When you are playing as Viese (you can switch between characters at save spots) you can begin item creation. To learn a recipe, you must find or buy texts and scrolls. Viese can create tons of items and equipment. By switching around raw materials, new items can be formed. Probably the greatest improvement is the fact that you don’t have to sacrifice items to keep your spirits happy, thus risking not making the item properly. Once they make the item, you can make it as many times as you want to as long as you have enough elements extracted. You can’t do this with equipment, however. Equipment needs to be made with the proper obtain all the items and one of the most exciting things in this game is finding a new recipe for a new item. Elements are extracted from rocks, trees, barrels and crystals, just to name a few. A very cool feature is the property review. Each base item has various properties attached to it. You can mix and match these base items when creating items to make them more powerful than normal. I’m not kidding when I say the possibilities are endless.

In terms of the above-mentioned equipment, there are two types. Accessories are stat boosting items such as brooches and helmets. The alchemy items slightly boost certain stats, but they teach the wearer skills. Once the skill gets enough SP, the skill is mastered. These are passive skills such as double-attack, dodge and quick. Your characters can equip two of each type of equipment for limitless stat boosting possibilities. Each character also has a specific weapon. Felt is able to play blacksmith and forge weapons into new and powerful forms. Also, most of the new weapons teach your character a new skill, which also becomes mastered after you get enough SP. To make a new weapon, like an item, a spirit and item are required. Each character has about eight weapon power ups. Again, it is super exciting to get the spirit and/or item to be able to make an awesome new weapon, especially if it teaches you a new skill.

Shine, My Sword!
Since I’m on the tangent of weapons and skills, we might as well talk about the times when they can be put to use. That is, of course, in battle. The battle system is turn-based, but much more fun than the first AI. The meter on top shows the order of turns. The faster the character, the sooner they get to take action. Characters have two types of attacks. Charge attacks fill up the skill gauge whereas break attacks knock back a foe. If the foe is knocked back near the beginning of the meter, they begin stunned. If you continuously hit that enemy with multiple hits, you build up a chain combo for colossal damage. The higher the chain, the more EXP and SP you get at the end of battle. Felt and Viese can synthesize items on the spot, and the two of them along with Poe can deal physical and magical damage at the same time. Some characters hit groups with one attack and others do multiple elemental hits with one attack. Defending charges the skill gauge, as does taking damage. Other battle options are switch characters and run away.

Your entire team shares the skill gauge, which starts at level one at the start of every battle. The most any skill costs is three, but since you share the gauge you have to strategize who uses what and when. Each character learns a plethora of cool skills, and most of them are great for creating long chain combos. Some boss battles will give you a run for your money, but most fights are simple to get through. No matter how you take down your enemies, the battles are fast, exciting and fun.

Walkin’ All Over The World
Probably one of the biggest game play improvements is the world map. Unlike the first game where you walked from place to place on an ugly map screen, this game features easy travel on a beautiful 2D painting. Also, all you do is move Felt or Viese to the location and click the X button. Simple!

When you reach your destination, if it’s a town, you can walk around and talk to NPCs. Most importantly, there is shopping to be done. Dungeons are where the real fun lies, however. A blue bar on the screen changes colors to red as you walk along. This indicates when you are going to get into a fight. After the fight, the meter lowers until it’s empty. This indicates no more fighting in that area. I really liked this nifty feature. Once again, there are places that you can’t reach at first because you’re missing an item. Some of the new things you can do are grow plants, mine rocks, and read magic talisman. There’s always something to do in this game.

Looking Good There, Sweetheart!
The world of AI2 is a colorful, 2D, anime inspired one. That is perfect for me, enough said. Just like the first AI, everything in terms of graphics has vivid colors and detail that bring this alchemic story to life. There are some beautiful anime scenes in this game as well, but as usual, not enough for me. In any case, whether you’re in battle or in the field, or even on the menu screen, you’re experiencing a gorgeous game.

Sweet Siren Songs
The opening theme is a J-pop song; so right from the start I knew that the music would be great. I was right. Nearly all of the tracks are upbeat and fun. One cool thing to note is that the battle music changes as you progress through the game. Most importantly, the song playing always fits the event going on. The sounds are the same deal as the music. The voice acting can be set to either Japanese or English. Either way, you won’t be clawing at your ears because both were done well. Everything else sounds fine.

Over Too Soon?
The game takes about 30 hours to finish, and there is no leveling up required because this is an easier RPG. Making all the items may add an hour or two, but even that’s a stretch. However, finishing the game unlocks some bonus material and the option to fight some of the most difficult enemies ever. Also, you can find the best combination of items to get the best property reviews. So, that being said, after you deal the final blow to the final boss there is still some things for you to do. Obviously, this is a game you should buy. It’s too long to finish in one rental unless you don’t sleep or get out much. Besides, I predict it becoming rare in the near future.

There ya have it, folks! Atelier Iris 2: The Azoth of Destiny is an amazing game for all the right reasons: great game play, great story, great world, great music…it’s just a great game! I see little to no flaws in the entire game, and this is why I gave it a perfect score.