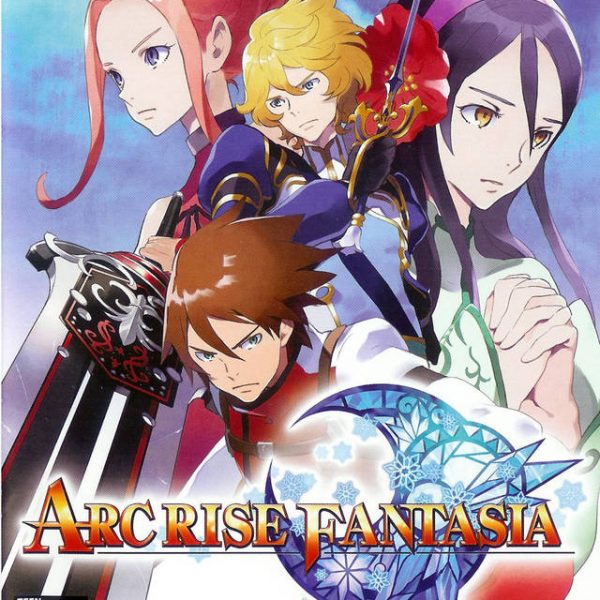 A few weeks before it was released, the buzz surrounding Arc Rise Fantasia was that it would be a traditional RPG with some of the worst voice acting ever recorded. My curiosity was piqued; I checked out a video of the game just to see if this voice acting was as bad as everyone said. Yep, it was bad. However, due not having the appropriate console I let the game slip under my radar until now. By enduring the game’s voice acting, I was able to fully enjoy a classic RPG on a modern-ish console that did far more things right than wrong. If you are a Wii or Wii U owner and are still looking for an RPG, then check out Arc Rise Fantasia.

Arc Rise Fantasia takes place in the world of Fulheim. Normally a vibrant and verdant world, Fulheim has been dealing with toxic monsters called Feldragons. These creatures aggressively attack anyone that gets in their path. If they are killed, they release a poisonous fume called Felburst. During a Feldragon hunting mission, legionnaire L’Arc Bright Lagoon manages to defeat a Feldragon but the fight results in him falling off his ship and into a forest. Before the Feldragon explodes to unleash its Felburst, a woman named Ryfia sings a hymn that neutralizes the smog. Ryfia is a Diva; a songstress that has the ability to create miracles with her song. Ryfia accompanies L’Arc as they exit the forest, neither of them realizing how critical it was that the two met one another.

Arc Rise Fantasia’s story is one that most RPG fans have seen before. Clearly, there’s more to both L’Arc and Ryfia than meets the eye. The same can be said about the rest of the characters they meet on their travels. I was able to identify who was going to turn against the party as soon as they entered the screen. While predictable, the story is still enjoyable. Save for a few obnoxious characters (namely, Niko and Dynos) the cast of heroes, villains, and supporting NPCs come together to deliver an entertaining narrative.

Luckily, even if you don’t care for the story, Arc Rise Fantasia proves to an entertaining game. The game has a solid mixture of classic role-playing with some modern implementations. After you take control of L’Arc, you’ll get a general feel of what to expect for the game’s entirety. The menus are clean and easy to navigate. You can equip your team with armor and accessories, use items, sort their order, and more. Weapons can also be equipped, but the weapons in Arc Rise Fantasia are different than other pieces of equipment. Using them in battle rewards you with Weapon Points. Eventually, enough WP will cause the weapon’s frame unlock and/or release a weapons special ability. These abilities, represented by blocks, can be moved around to other weapons as you see fit. Filling a weapons frame entirely will release the weapon’s hidden ability, which is a nice bonus. Every character has a wide variety of weapons at their disposal. As a result, there are nearly endless weapon traits for you to experiment with.

Weapons, armor, accessories and items can be purchased in the shops in towns. Money is never a problem, so you’ll always be able to keep up with the latest gear. In fact, the only time your money might start to run into the red is when you start diving into the game’s magic system. Magic is used based on your characters’ Orb Level. At the cost of some cash, you can increase how many magical orbs a character can hold, their level with each element, and the amount of casts a person has with each magic ranking. It sounds confusing, but everything becomes clear after you set foot inside the magic shop and watch as your character’s abilities grow. If you don’t like how your character is set up, you can reset their Orb Level for a fee and start again. It can get pricey, but taking the time to equip your team with the best gear and having them set up with the best magic is critical to your success in battle.

This is because Arc Rise Fantasia is a challenging game. A good challenge, for sure, but it’s still a challenge. A combination of high levels and well-planned preparations are required in order to achieve victory in Arc Rise Fantasia. Up to three characters can participate in battle. Sometimes, a fourth character will join as a guest and act on their own. This was an odd choice; it would have been much more sensible to have four characters in at a time. Using an Action Point system, you start a round by issuing commands to each of your characters. Each command costs varying levels of AP. Once you’re out of AP or you wish to stop using any more of it, you can let the battle begin. Your team and the enemy team will begin to act. When all participants are done acting, you start a new round.

As the game progresses you’ll slowly unlock more and more options for your characters. L’Arc will be able to summon beings called Rogress. Characters can combine their magic power to unleash even greater destructive force. Magic can be further amplified if crystals called Ray Stones are on the battle field. Finally, characters can learn unique skills called Excel Attacks that cost Skill Points to use. Combining Excel Attacks will create a Trinity Act, which can really dish out some hurt. There are lots of things that your team can do, and you’ll be needing to use all of it in order to achieve victory. While the regular encounters in Arc Rise Fantasia are straightforward and worry-free, the bosses are a different matter. Indeed, “boss” is a good term for them because they act like a should. You’ll go through items, cast all of your magic, and still barely come out on top if you’re not careful.

The challenge from some of the bosses is so great that there are folks that will cry foul or claim that the game is too hard. There are even those that would call it “unfair.” Well, remember what I said? This game has a good challenge. Grinding for levels is simple. Taking time set up your weapons and magic is essential. Instead of mashing your way to victory like many are used to, you actually have to think about what you’re doing. Arc Rise Fantasia gives you the tools; it’s up to you to use them properly. Bosses don’t pull any punches because they use all they have. By doing the same, you’ll come out on top with a satisfying victory.

Arc Rise Fantasia has a variety of gorgeous environments including towns, mountains, and caves. The problem with them is that many of these environments are too big. When you’re running around the town of Carbunculus or Diamant, you’ll be spending a good five minutes just getting to your next destination. A quick-jump option would have been welcome. The character graphics, monster designs, spells, Excel Attacks, etc. all look great. Really, I have no complaints about the game’s look. The music by Yasunori Mitsuda is the high quality level you’ve come to expect. Then, we get to the voice acting. It’s definitely awful, but is it game breaking? No, not at all. In fact, you can mute voices if you want. I don’t recommend this, though. Some of the voices are so bad that hearing is truly believing.

While Arc Rise Fantasia can be finished in 40 hours, I finished it in 60 hours. This was due to me constantly powering up new weapons, figuring out the best magic set ups, and tackling some of the game’s downright brutal side-bosses. Arc Rise Fantasia is packed with content that can easily last you up to 100 hours. That’s 100 hours of stuff many will overlook due to the game’s poor voice acting. I recommend this game to all RPG fans. It’s lackluster plot and previously mentioned voice acting aren’t enough to outshine the things it does right. Just get ready for a challenge. Arc Rise Fantasia is a game meant for RPG players that know better than to just button mash their way to victory.

Overall, 7.5/10: Arc Rise Fantasia is a great RPG for a system that desperately needs them.