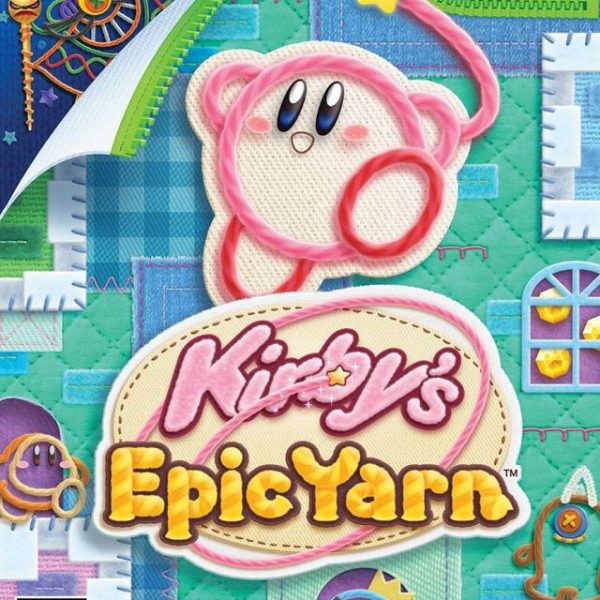 In all of my years of gaming, I don’t think I have played a game more creatively cute and artistically adorable than Kirby’s Epic Yarn. I’ve always been a huge fan of Kirby. In fact, he’s the only Nintendo mascot that I keep up with. When there is a new Kirby game on a system I own, you can bet that I’ll be there to pick it up and enjoy all that it offers. I finished Kirby’s Epic Yarn when it was first released in 2010, but having replayed it recently, I felt that I would add another review that sings its praises for being one of the best games available on the Wii. Gamers of all ages and levels of experience will enjoy Kirby’s Epic Yarn.

Obviously, Kirby’s Epic Yarn has an amazing and distinctive look. Everything in the game is styled after cloth, string, textiles, and other sorts of fabric. The way the environments come together creates a unique form of art that cannot be justly described with words in a review. Taking the time to see how much care was put in the minutest detail will not only melt your eyes, but it will melt your heart. Furthermore, the graphics aren’t just for show. Kirby will interact with loose pieces of string, zippers, or laces in order to access more cleverly designed areas. Half of the fun provided by Kirby’s Epic Yarn is seeing what new levels have to offer. Alongside the music is that favors softer melodies for a more soothing sound. Unlike Dream Land or Super Star, the music won’t have you humming along. However, it’s still an important part of the presentation. Kirby’s adorable shouts and sayings add even more adorableness.

So, how did Kirby end up in this world of whacky wool? Kirby discovers a tomato that looked like it was begging to be eaten. Unfortunately, it wasn’t a tomato at all. Actually, it wasn’t even a piece of food. The round red object was attached to the body of an evil sorcerer named Yin-Yarn. With Yin-Yarn’s curse, Kirby turns into yarn and finds himself in Patch Land. In order to return to Dream Land, Kirby must restore Patch Land to its former glory by finding seven pieces of magic yarn. With the help of Patch Land’s hero Prince Fluff, Kirby sets out on another adventure. Familiar locations like Pop Star might not get much of a mentioning in Epic Yarn, but Kirby’s quest in Patch Land is just as memorable.

Since Kirby is in a new world, it only makes sense that he gets new abilities. Kirby and Prince Fluff share the ability to run, float, and slide through the various levels of Patch Land. Traditionally, Kirby is able to copy the abilities of his enemies by inhaling them. Since Kirby has turned into yarn, he lacks the capacity to inhale enemies. Now, he uses a yarn whip to attack enemies and turn them into yarn balls. These can be thrown against opposing enemies, similar to the way he would inhale an enemy and fire a star. The whip is also used to solve puzzles. Finally, Kirby can transform into various vehicles during special levels. Each level has beads that can be collected, which are used to purchase pieces of furniture. There are always plenty of beads to collect, so it’s relatively easy to always have enough income to get the things you want at the shop. In fact, Epic Yarn is easy in every regard. If Kirby falls down a pit or gets hit, then he will lose some of his beads. There is no life count in this game, which is the only fault I can find in it. Kirby can take infinite hits and still emerge victorious. Traditional Kirby games usually have an easy level of difficulty, but Epic Yarn takes it a step further.

The lack of challenge means that you can finish Kirby’s Epic Yarn in about 10 hours. With plenty of stuff to collect and some secrets to unlock, there is plenty of reason to go back for more. This is a timeless game that will offer something to any gamer, especially fans of Kirby.

Overall, 9/10: While not a traditional Kirby game, Kirby’s Epic Yarn will sew its way to your heart from the moment it begins.