To live in an age so wondrous is a blessing-but to live in Ivalice, even more one. 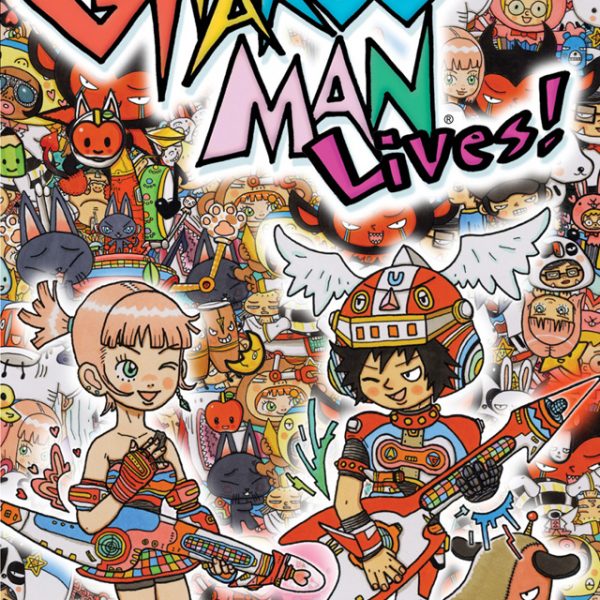 Author’s Note: This review was originally published on August 13th, 2007. Like other reviews of the time, it features “witty” taglines that designate each section. Since this review, I have been able to acquire and play the original Gitaroo Man on the PlayStation 2.

I was never able to try the original Gitaroo Man on the PS2. Whenever I see it in stores nowadays, it costs a whopping 40 dollars. Luckily, I was able to find the PSP version for a fabulous 20 dollars. Gitaroo Man Lives! was well worth it because this is one music game you cannot miss.

From Zero to Hero.
The game stars the socially awkward U-1. He and his dog Puma are tired of dealing with the problems of the local bully, Kazuya. In order to win the heart of his true love, Pico, U-1 wishes to become a skateboarding master. While he can barely pull off a kick-flip, there is something secret about U-1. He is a descendant of the legendary Gitaroo Man who has a magical guitar that fights evil! With his new found powers, U-1 must travel to planet Gitaroo to stop the vile Zowie and his Gravillians.

Music and the power of love will save the world! Ok, that may sound cheesy, and for the most part the story is cheesy. However, it’s fun. It’s fun to see U-1 accept his destiny as Gitaroo Man, it’s fun to watch him fight for love, and it’s fun to see him rock out as he saves an entire planet. The antics U-1 and Puma get into can be quite hilarious. Sure, the story is nothing surprising, but the way it pans out and the script make it a quest that can be enjoyed by all. The story is fully voiced, and while the dubbing is a bit off, the voice acting was done well.

Gitaroo Power!
So, you’re probably wondering what U-1 has to do to save the world. With his mighty instrument in hand, he will face off against devious villains in battles of rock n’ roll. When you start a stage you’ll notice there are many things happening on screen. On the top left is U-1’s life gauge. On the top right is the enemy life gauge. Near the bottom of the screen is your score and the mode you are currently playing in. Usually, the stage starts off with you in charge mode. This is the mode in which you gain life. U-1 plays his guitar, and the better he plays the more energy he’ll receive. To play this rockin’ instrument, you use the analogue stick to follow a blue line that comes from the outside of the screen. On these blue line are bars with circle’s at their beginning. When the circle reaches your cursor, you have to hit O button at exactly the right time. Usually, the bars are long and you’ll have to hold the button down. Furthermore, you need to release the O button at the exact moment the bar ends.Timing the press and release of the O button is critical in charge mode. Depending on your timing, you will receive a score. The ranking is Great, Good, OK, and Miss.

The next mode is attack mode. Again, you rock out as you play your guitar. This time, however, you inflict damage on your foe. When you are done attacking, you will enter guard mode. The blue lines go away, and this time your opponent will attack. Luckily, U-1 can dodge by hitting the corresponding button when hits the middle of the screen. Again, timing is everything. The attack and guard mode continue until the song nears it’s end. If you continue to perform well, you will enter the finale in which you play non-stop until the song finishes. When the song ends, you will be graded on how well you play. The grades are S, A, B and C. If you get an S or A score, you will be rewarded with items that you can view from the main menu. While you won’t get as many as you would with the higher scores, you still get some collectibles for obtaining a B or C.

I could not put this game down. It was fast, intense, and original. Every stage, every song, and every battle was fierce and accompanied by great music tracks. The control scheme makes Gitaroo Man Lives! effortless to pick up and play, but challenging enough to master. Getting a high score on all the modes will take time and practice. My one qualm with the game play is the loading issues. It can take up to 60 seconds for a stage to load.

The OST of the Heart!
For a game wrapped around music, you can bet your bottom dollar that the tracks are killer. Each of the songs you perform are different and reflect various genres of music such as pop, rock, jazz and more. Here is one OST that is worth hunting down. Luckily, you can listen to all the unlocked tracks from the main menu.

A Laser Light Show!
Graphically, the game is a treat. The graphics are colorful and psychedelic, yet subtle enough that they do not distract you from successfully completing a song. It may be hard to watch the action around you during a performance, but you can always watch the replay movie when the song finishes. The movies that push the story forward were well animated. These can be viewed from the main menu.

Like All Good Songs, They End Before Beginning.
The game lasts for 10 stages. Each stage can be completed on the first try when the game is set on regular difficulty. While the initial quest took me only two to three hours, it’s the challenge of getting high scores on all of the stages on the highest difficulty setting that adds amazing replay value to the game. Sure, you can easily beat in an afternoon. However, this is the type of game you can pop in your PSP, play for a bit, and put away for another time. I can guarantee you will never grow tired of it. Furthermore, there are some exciting multi player options for you and a friend to play.

It may be a port, it may be short, and at times it will frustrate the impatient sort. However, Gitaroo Man Lives! is a great game for the rhythm-game fans and those who just want a PSP game to pass the time. Save the world with music by playing Gitaroo Man Lives!