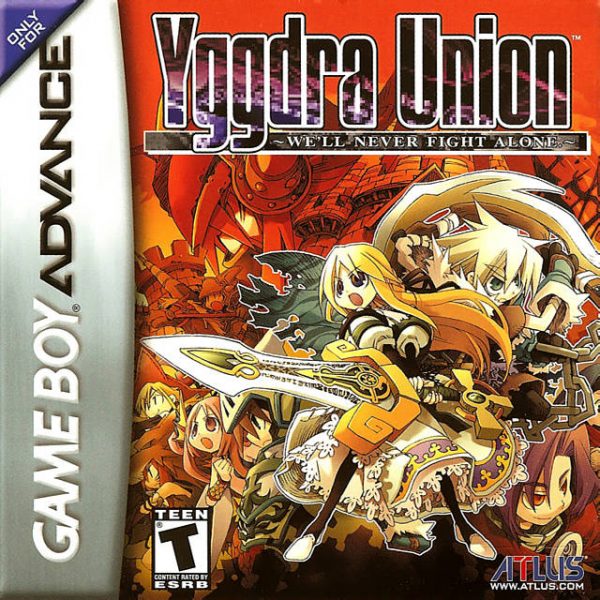 Author’s Note: This review was originally published on February 12th, 2007. It was written during an interesting time in my life, and unlike other reviews of the year, I didn’t use taglines to divide the sections. I still have a high opinion of this game.

So you think you’ve seen it all when it comes to strategy games? Well, think again. Out of nowhere, Yggdra Union has arrived for the GBA. This little gem has some great features never before seen in the genre, but some of these features really could use some polishing because the game has a difficulty level even the most seasoned players could find challenging.

Yggdra Union is the story of a young princess, named Yggdra in her kingdom of Fantasinia. The evil emperor Gulcasa launched a massive attack, slaughtering everyone in her kingdom capitol, including Yggdra’s parents. As the capital of Paltina burned to the ground, Yggdra escaped the carnage while holding a sacred sword: the Grand Centurio. A fateful encounter with the rowdy thief Milanor begins Yggdra’s adventure to stop Emperor Gulcasa and restore peace to her kingdom.

This is a story not for the faint of heart. It’s serious, and shows the tragedies of war. However, it is also a story of self-discovery, because you watch as a princess matures valiantly into a queen in order to save her people and homeland. Unlike some of the many SRPGs out there now, Yggdra Union has a plethora of story characters, as opposed to mercenaries you simply recruit. Most of these characters are well developed. Furthermore, this game has some of the most despicable villains to ever grace a video game. The exciting story will keep you playing until the end.

I said that the story is not for the faint of heart. I say this now because when you look at the graphics, you’d probably think otherwise. The sharp, colorful, and vivid anime sprites and portraits portray this as a cute game, when in actuality it is the complete opposite. I’m not saying that the graphics are bad; on the contrary they are gorgeous, especially when you are watching a battle sequence play out. While the actual maps are bland beyond belief, the graphics you see during a story sequence or a battle sequence make up for that. When you look at the status screen, you’re treated to some of the most dazzling works of anime art ever seen. But, as I said, this is not a light-hearted game.

Nor is this game easy. Not only does the lack of polish make this game difficult, there is a moderate learning curve that you’ll have to get used to. While there are plenty of tutorials, they only touch the surface of how complex the game play of Yggdra Union plays. The game follows the flow of a story event, a battle, and another story event. When it’s time to battle, you are given conditions of victory and defeat. Next, you chose your characters, but unfortunately, there are only a handful of characters that join you, yet a variety of character classes in the game. I would’ve loved to see more characters just so I can experience their classes. Anyways, navigating this character selection menu takes some getting used to. Pressing right or left on the character takes you to different menus for them, and hitting the A button allows you to select them. You can equip only one thing at a time on your characters, and they only last for a certain number of battle fields.

The next menu you’re taking to is the Card menu. I know what you’re thinking: cards equal an automatic fail, but this is what they used to allow your characters to move around the map. Each card has a skill and a number. The number corresponds to how many squares your team can move across the battle field, and the skill is, obviously, what the card does. Think of it as your magic. However, on each card is also a weapon symbol, and only those who lead an attack can allow him/her and everyone else in their party to use that skill.

So, you have your cards, and then the battle begins. The system plays out in typical SRPG, player turn, enemy turn, fashion. Once either conditions are met, the battle ends. If you lose, the enemies are toned down for the next time you play. Battles are where the real fun begins. This game features the unique union system. Team members who are beside the person attacking participate in a union. This means that after the first team finishes a battle, the second team goes and so on. For a male character, the allies must be in an X formation, whereas female characters can have their allies in a + formation. Yes, this sounds confusing, but the tutorials do help with this feature. The unions allow for some really strategic thinking, and considering how you can only have one battle per turn, you have to use unions to take out your enemies effectively.

When the battle starts, the person leading the battle attacks, and then the opposing side counterattacks. Finally, both teams duke it out until all of the team members on one side have fallen. It’s important to note that the weapon types in this game have a rock-paper-scissors quality. Swords are strong against axes, which are strong against spears, which are strong against swords. Furthermore, there are staffs for necromancers, brooms for witches, bow and arrows for hunters, crossbows for assassins, and scythes for dragon riders. Knights are mounted on horses, and there is also a class that rides griffins. To add even more strategic fun, some classes perform better at night than at day, and the terrain can help or hinder a weapon type. When a clash finally ends, the losing team suffers a drop of Morale, which basically act as HP. When morale reaches zero, that team is off the battle-field for good. Probably the worst thing about this game is that the only way to recover morale is to sacrifice items. When you level up, complete a mission, or anything else along those lines, your morale does not change.

This can be very troublesome when an enemy has cannons at their disposal. Furthermore, the game is very linear and it basically makes it so that if you don’t attempt to fulfill the victory conditions, you’re probably going to lose. Also, when there is a critical attack, it usually means that the receiving team is going to lose the clash. Some battles can take very long, and if you run out of cards, it’s game over. What sucks is that most of the time, the enemy sits around and waits for you to expend all of your recourses while you march forward for an attack. Even worse, if you don’t plan properly with the right cards and union leaders, you won’t be able to use skills.

Probably the most annoying features of the game is Zero Reset. If a person on your party reaches zero morale, they lose all experience points obtained and start the next battle with 1 morale. They could be one point away from a precious level up, but then they lose all of that progress. That is what annoyed me the most about the game.

I know that you’re thinking this game sounds too hard or confusing, but I just wanted to get the bad out of the way. In all honesty, the good makes up for it. Using powerful skills and winning your way to victory is a blast in this game, especially for hard core SRPG players. I was hooked onto this game from the get-go, and while I did lose some battles at times, you can easily learn from your mistakes and try again. The next time I play, I plan on using a walkthrough. On every battlefield, you’ll find items hidden. They can be in the towns, or on a random square. Much of these items allow extra content to be seen, which appears only after you complete the game. Furthermore, no game overs means special surprises. Besides, the story is wonderful, so even if you lose at times, you are still able to witness a good tale.

You’re also able to hear some of the best music to ever grace a video game. I was shocked when I heard how many great tracks this game had. Not only are they plentiful, they actually sound good. I may even hunt down the OST. And in case you’re wondering, there is no voice acting in this game.

That about wraps this up. I highly recommend Yggdra Union to any SRPG enthusiast. It may be difficult at times, but the rewards to be reaped from finishing the game are well worth the trouble you may go through. Princess Yggdra shows that a woman is just as capable as a man when it comes to fighting for kingdom and crown.