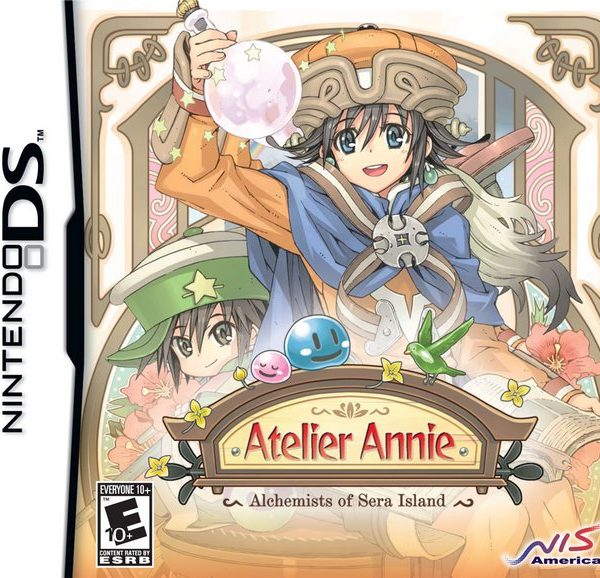 Atelier Annie is an adorable little sim/RPG for the Nintendo DS. Folks interested in it should understand that it’s the first game in Gust’s cash-cow franchise to follow the typical Atelier formula AND get a stateside release. This means that story, battles and character development take a bit of a backseat so item creation and resource management can get the center of attention. Thus, if you want a small taste of what later Atelier titles have to offer, then you might want to start with Annie’s mini-adventure so you can get a better understanding of time limits, gathering spots and other nuances that make the series so unique.

The leading lady in this adventure is named Annie Eilenberg. Annie is a lazy bum who wants to marry up. Her parents aren’t too thrilled by this lack of work ethic, so they send Annie’s grandfather on her. Annie is carried away (while still in her bed, mind you) to Sera Island and is informed that she has work to do. She has been ordered to develop Sera Island into a prosperous resort town within three years. While she refuses at first, Annie eventually learns that she could marry the handsome Prince Olsen of Sera Island if she does a good job in creating the best resort town ever seen. Annie’s quest is, by far, the most light-hearted in any Atelier title. The best part is that Annie stays true to herself in wanting to marry up for a good chunk of the adventure. While a talented alchemist, Annie remains lazy and silly as the years progress. She meets some just as endearing characters during years, as well. Conversation is not lacking in this game, and there are plenty of incidents that will warrant a chuckle thanks to the solid translation. Annie’s world is one without worry, as is the case with most titles in the Atelier universe.

Even with a time limit, there isn’t much to worry about since Annie has plenty of spare time to get her tasks done. Atelier Annie plays similar to the first Ateliers, as well as those on the PS3. Battles, for instance, are simple and turn-based. Other than the typical attack, skill and defend options, there is the option to switch rows. Depending on your row, your character’s stats and special attacks will change. It isn’t ground-breaking, but remember, this is a game more focused on item creation. Annie has access to areas around the town that allow her to gather resources for item synthesis. As you voyage outside of town, the time ticks away. Time also ticks away as you perform alchemy. This is done, once again, by combining raw materials from your adventures outside into your pot. As the game progresses, Annie will acquire new recipes and more materials. This will allow her to make better quality items. For a pint-sized DS game, the item synthesis was surprisingly deep. You can add traits, elements and other things found in most Atelier games and use them for fulfilling requests and for battle. Most importantly, you can use these traits to create the best possible item needed for an assignment at each half point of each year. By doing well in these assignments, you can earn money for Sera Island and use this money to build more structures. It all comes together to make an addictive and enjoyable little game.

And “little” can be used to describe other aspects of the game as well. After you watch a well-made anime opening, you learn that character sprites are little. Very little. Think of a normally proportioned sprite, then make it chibi, and then shrink it a few more times. They look odd, and will definitely put off fans who have gotten used to the crisp, 2D sprites from Atelier Iris or the gorgeous graphics from the PS3 Atelier titles. Luckily, sprites are accompanied with well-drawn portraits. There is also a surprising amount of voice acting in this game that is entirely in Japanese. The music is lacking, mainly due to the little amount of areas to explore. Needless to say, Atelier Annie has a hard time keeping up with other games on the DS that have better graphics and better music.

Atelier Annie can be finished in as little as 10 hours. Since there are multiple structures to make for multiple places, most will recommend that you play the game at least one more time to get the most out of Annie’s adventure. There are plenty of endings to witness, as well. When it comes to making a recommendation on this game, I say check it out only if you have become curious about traditional Atelier titles OR if you just can’t get enough of item synthesis and want something new to pass the time during commutes. Other than that, chances are you are better left playing something with a bit more content such as the games in the Arland saga or the Dusk saga. Atelier Annie: The Alchemist of Sera Island may not offer much to those who have grown used to the 50 hour travels through Arland or the bountiful adventures from the Iris Trilogy, but for those who enjoy the series enough it will be a welcome ingredient in a long list of alchemic titles.