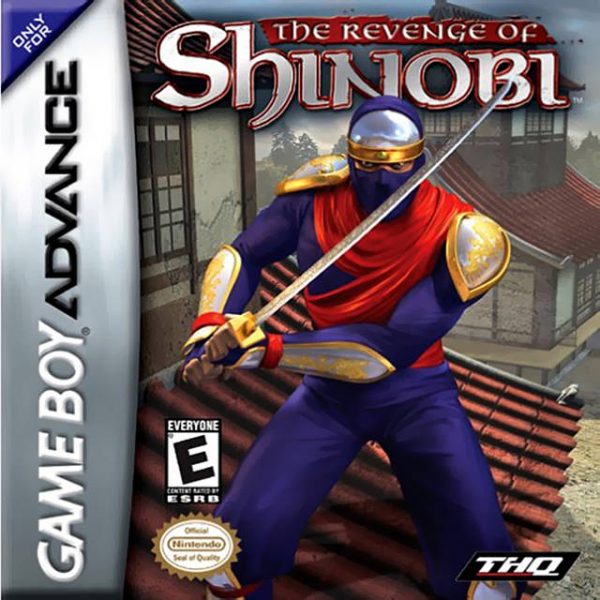 Ouch. What happened here? When it comes to Shinobi, you are supposed to follow two very important rules. The first rule is that the game must be challenging but not broken. The second rule is that the action must be intense. The Revenge of Shinobi for the Game Boy Advance follows neither of the two rules. Now, this is by no means a 1/10 type of title. For a game to be given a one, it needs to be unplayable, full of glitches that hinder any progress, or Suikoden III. You -CAN- play Shinobi and not run into anything that would make it unplayable. However, you should still avoid it because neither of the two rules listed above were followed and it leaves you with an uninspired, monotonous action game.

But! What really gets me annoyed by this Shinobi game is that it looks like it could be enjoyable. Despite the game sharing the name with the Genesis classic, The Revenge of Shinobi is an entirely new story. It’s about a ninja named…wait for it…Shinobi, that gets tasked with recovering five elemental swords. If these five swords are not retrieved in time, then the evil Asura-O will awaken once again and take over Japan. So, I’m thinking that this game could be kind of exciting. “Neat! Shinobi gets five elemental swords! Plus, he gets to use his arsenal of skills to take down bosses! It will be like Crystalis, but in Japan! And with ninja!” That was the way I was thinking.

Unfortunately, that is not the case. Like, at all. Shinobi begins with a sword and nine shurikens. As you go through the various stages, you can find power ups, recovery items and acquire scrolls that teach ninja magic and ninja skills. The only one worth mentioning is the double-jump, since ninja magic is so finicky and the rest of the skills acquired hardly have a use. As you go from stage to stage, you will encounter enemies that are way too easy to defeat. In some of these stages, Shinobi will encounter a sub-boss or a boss that will initiate some dialogue. I will say it was somewhat interesting to watch Shinobi interact with his foes. That said, sub-bosses are a disappointing challenge. The bosses who guard one of the five mystic swords aren’t difficult, but they take way too long to defeat. In fact, the one who guards the fire sword will take ten minutes to defeat. That is far too long for a boss that does nothing but fly across the screen and spit fireballs at you. Even the final boss doesn’t take as much time! When you take into account the little bonuses you can get at the end of the stage called honors, Shinobi is boring. To add insult to injury, moving on downwards slopes and performing certain maneuvers is clunky.

Even the graphics and music are boring. While the game looks nice, there isn’t much variety. Characters move surprisingly gracefully, but the environments they move in aren’t very inspirational for a game set in Japan. There are exceptions, but for the most part I was left wanting more. The music is more of a disappointment than a bore. The tracks are subtle. You will hardly notice that there is music playing. Boss music is about as underwhelming as the stage music. I’m a huge fan of the soundtracks for all of the Shinobi titles I have played, so hearing this was disappointing.

As this review comes to a close, I think that “disappointing” is the best word to describe The Revenge of Shinobi. Playing the game is a real downer, and it gets worse with the snooze-inducing presentation. The nadir of the experience is that you have to save the game with passwords. PASSWORDS! You remember those from BACK IN THE 1980s, right? Who the bleepity bleeping bleep uses PASSWORDS anymore?! A save system wouldn’t have made the game any better, but it wouldn’t have made the experience be as detestable. Passwords…honestly! If you had any interest in this GBA title, chances are you now want nothing to do with it. No one will blame you. This is a Shinobi title that seemed to have some good stuff going for it at a glance. I hate to rain on your proverbial parade, my dear ninja, but it’s just not true. For some ninja action, you’re better off looking elsewhere.