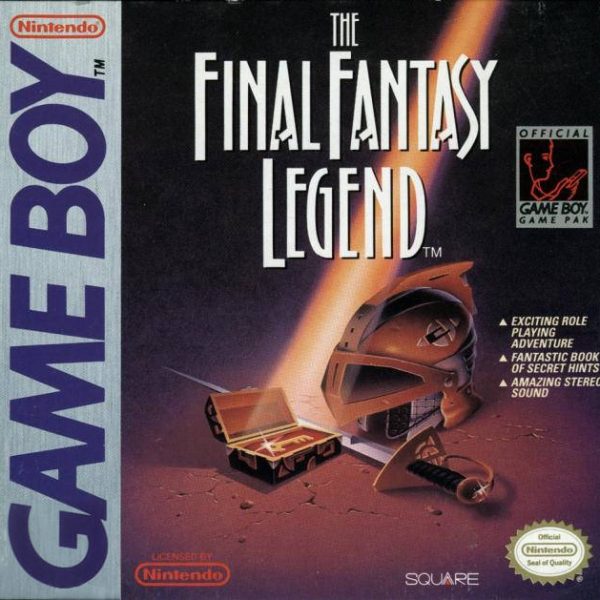 Author’s Note: This review was originally published on August 11th, 2003. And boy, does it ever show. I felt like it was one of my missions in life to remind people that the three Final Fantasy Legend titles were actually part of the SaGa series. The messiness of this review aside, I will say that my opinion on this game remains unchanged. It’s not the most polished game, but there is an undeniable edginess to the story.

FFL is the first game of the SaGa series, not an installment of the Final Fantasy series. Just thought everyone should know. ANYWAY, Final Fantasy Legend was my first Game Boy RPG, and after I finished it I felt…accomplished.

Story: 6/10
There is a tower that leads to paradise, and only a few brave warriors have traveled up the structure. Now, four heroes are going to try to reach the top of tower. That’s pretty much it. Along the way they’ll fight the four tower guardians and see what they’re all about, but still nothing really deep or thought provoking. But back when I was a wee lad, I enjoyed it. It does have a really cool twist at the very end, however.

Gameplay: 9/10
FFL gives the players the freedom to customize their chosen party any way they like. There are three classes you choose from: Humans, Mutants and Monsters. Humans get stronger by using potions, Mutants get stronger by leveling up and Monsters get stronger by eating meat of killed foes. Each class also has their strength and weakness. Humans don’t learn skills, Mutants can only equip four items, and Monsters can’t equip anything. But Humans are usually the strongest class, Mutants can become very powerful after much training, and Monsters can evolve into deadly beasts with the right monster meat. So, you have plenty of options to choose from. I really liked choosing my own party and equipping them how I saw fit. The part that was the worst was that your weapons had limited use. Also money was a huge problem, so buying things was not fun.

Battles: 3/10
Ugh…very repetitive even for an early RPG. Battles are turn based, thus making them easy to learn. And you will learn them, because you will encounter A TON of monsters. I’m saying after you take two steps you enter a fight. Take two more steps: another fight. And you’ll just be mashing the A button to attack most of the time. Bosses can really be challenging, though. Still, most battles are repetitive. After a certain point in the game, they also become VERY hard. So hard, you may consider starting a new file. While basic and easy to learn, the battles could’ve been better if they weren’t so random and difficult.

Characters: 4/10
Well…there is absolutely no character development in this game. But I really didn’t care too much because I could pick my characters.

Graphics: 7/10
For a Game Boy game, the monster designs are quite good. While nothing dazzling or unique, they still get the job done. The character sprites are just black and white versions of the NES Final Fantasy sprites. While cute, they could’ve used a better design. In any case, the graphics are good and won’t turn you blind or anything.

Music and Sound: 8/10
The music is good for a GB game, but there are so very little tracks. You will hear the same song over and over. The battle theme really gets repetitive (due to the previously mentioned endless random encounters). The last boss fight song is pretty good, however.

The sounds are the game are good because they’re very unnoticeable. I was happy with them.

Replay Value: 4/10
Some may want to try a new party, but I sure as hell didn’t. Once through the game will be enough for most everyone.

Difficulty: HARD
This is probably one of the most difficult games I’ve ever played in my life. All I can advise is that you use your money wisely on good gear. I died so many times on that last boss…

Buy or Rent: Buy…
I guess buy it, mainly due to the fact that you can’t rent GB games anywhere. It’s pretty cheap, so you don’t have to worry about cost.

Are you going on a long vacation? And does your GB, GBC, or GBA crave an RPG? Then why not give this game a go. While nothing special, it still delivers a good role-playing experience. Not to mention that after you beat it, you’ll feel on top of the world!