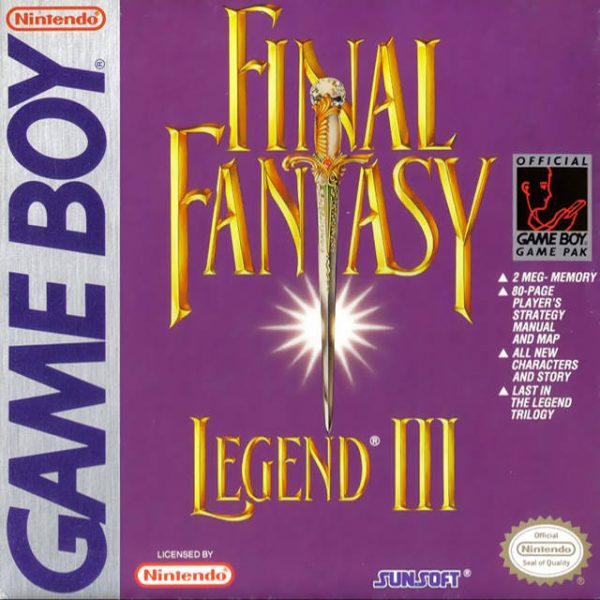 Author’s Note: This review was originally published on September 1st, 2003. I make some outrageous claims in this review, but my overall opinion of Legend III remains about the same. I feel like it’s the most far removed from the three SaGas on the Game Boy due to its traditional nature.

The last installment of the SaGa (not Final Fantasy, if you’ve not been paying attention…) Game Boy series. Although this game strays away from some of the stuff that makes it a SaGa, it still is a wonderful game to own.

Story: 8/10
A mysterious force has appeared and has began to flood putrid water in the past, present and future. Arthur, a young warrior has been sent back in time with his friends Curtis, Gloria, and Sharon. (Yes, the names are changeable)Together, they attempt to rid the of the evil using the powers of the time machine Talon. When all of the parts to Talon are completed, Talon will be able to overcome this evil.

I really loved how you were able to travel to the past, present, and future in order to stop the evil force. The world changes according to which time you are in, something good for the Game Boy. This is where Chrono Trigger got it’s roots from!

Gameplay: 10/10
Finally…Square improved on what was BAD and kept what was good. The first improvement is that the weapons don’t break at all. This will save you a lot of money. Speaking of money, cash flow is totally not a problem anymore. Yes, you will have to train to get that special sword…but it won’t be that big of a hassle like it was in the first two FFLs. You learn spells by buying magic spells (like Final Fantasy I). If you want to get rid of it, just select to remove it and replace it with something else. There are a ton of spells in this game, and all are useful. Gloria is better with white magic while Curtis is better with black magic. Also, you will find gray colored spells that allow you to float, swim…stuff like that. The towns all change, depending on what era you’re in. And you can even jump! Now that is fun! Overall, I was very impressed with the gameplay.

Battles: 8/10
The battles move a bit smoother than the first two FFLs. You don’t encounter them as much, but they still can get frustrating, especially considering the length of some of the dungeons. You once again can get NPCs to join your party, making the battles a little more interesting. Another thing that I really liked is that anyone of your characters could transform into beasts, robots or the new class: cyborgs. Each class has a strength and weakness, and opens up much room for customization. The one thing I really didn’t like were the boss battles. They just seemed to drag on and on, especially the last battle. It wasn’t that they were hard, it’s just that the monsters had an obscene amount of HP. But overall, the battles are much better.

Characters: 9/10
Finally, FFL has some nice characters. Although there is nothing thought provoking about them, they’re still cool in how they develop in the different eras. Hell, even some of the NPCs develop well over time. I was very impressed for a Game Boy game.

Graphics: 9/10
The graphics haven’t improved much since the last game, but there are still some noticeable differences. Swords change depending on the type, and magic looks different depending on the power. There are a lot more monster designs, but the character sprites look the same as usual. Nothing bad, nothing new and exciting really. The graphics are good for a Game Boy game.

Music and Sound: 8/10
I was actually impressed with this. The music is pretty catchy at times. It fits the mood of the scene quite well.
Although it does get annoying, as usual, you can just turn the sound down

The sounds are quite appropriate. They’re aren’t like random chimes or anything along the line like that. They’re good.

Replay Value: 4/10
Once again, majority will play this once and only once. Since the story is a bit more linear than the previous SaGas, there isn’t much room for doing something new. Although there are some nifty side dungeons.

Difficulty: Medium
The difficulty was toned down a bit from FFL one and two. Some may like this, others may not. I didn’t mind personally because it was a fun game.

Buy or Rent: Buy
This is a buying game, because rentals for GBs are impossible and you’ll be playing this for a pretty long time.

Overall, FFLIII is a wonderful way to end the start of the RPGs on the portable systems. This is a game good for the road trips, and good for the home as well. Just be sure to get some extra batteries.