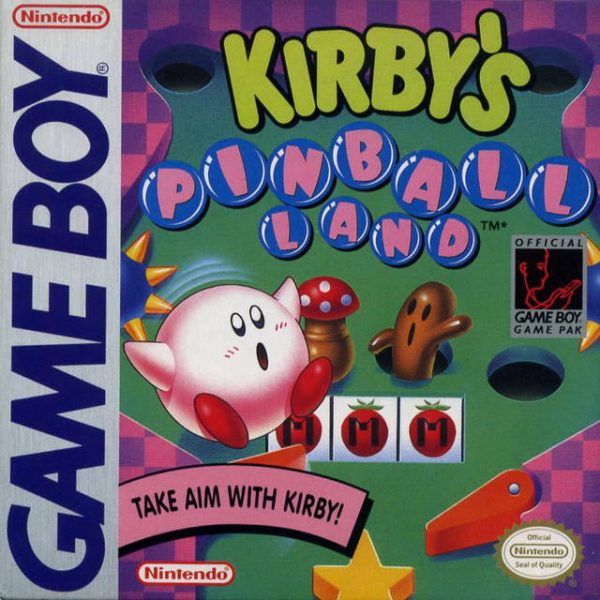 After Kirby’s Dream Land and Kirby’s Adventure, I couldn’t wait to see what Kirby would get his puffy self into next. Would it be another romp through Dream Land? Would he be exploring a world beyond the reaches of Pop Star? Would he be able to acquire new copy abilities? The answer to these questions and more was, “no.” In fact, it was a big “no.” Kirby’s third title could hardly be considered a “title” at all. Instead, it’s the first of many spin-offs that poor Kirby will get himself sucked into. Kirby’s Pinball Land is just that: a pinball game for your Game Boy with Kirby as the ball. There is no need to worry about saving Dream Land from some sort of evil. The only thing you need to worry about is properly using your flippers and racking up a score as high as possible.

Kirby’s Pinball Land begins with you selecting one of three tables. As soon as you start playing, it’ll be apparent that the game’s engine works well. Kirby will bounce and ping off of a variety of objects in a realistic and fun manner. Despite not being a fan of pinball in the real world, there is a lot offered in Kirby’s Pinball Land. As mentioned there are three tables. Each table is represented by a classic Kirby enemy: Whispy Woods, Kracko, and Poppy Bros. Senior. Furthermore, each table has three separate levels. The three levels have various bumpers, enemies, and other obstacles that you can hit to earn points and multipliers. Most importantly, each level has some sort of gimmick that will either help Kirby get to a higher level or let Kirby ride a Warp Star.

Sound confusing? Don’t worry; it’s really simple and surprisingly intuitive for a pinball game. For instance, on the first level of the Poppy Bros. Senior table, alongside various bumpers and objects there is a Frosty and a Chilly that can be hit for points. But, there’s a twist. The more you hit Chilly, the more letters you earn that spell the words “Warp Star.” Once spelled, a Warp Star will appear and take Kirby back to the table selection screen if he hits it. On the other hand, spelling the word “Frosty” from hitting Frosty will cause him to activate. This means he will catch Kirby and swing him around until you hit a button to have him thrown. These sorts of mechanics and puzzles are across all three tables and levels. This adds plenty of variety in comparison to your average pinball machine. Best of all, if you fall to the bottom of the first level, you are given a second chance to send Kirby back up to the table. A springboard will catch him and allow you to get him back to the action. However, it gets smaller and smaller with each use.

Warp Stars need special mentioning because they are what allow you to reach bonus stages and boss stages. We already talked about the Warp Stars on the first level; they take you back to the table selection screen. If you touch a Warp Star on the second level, you get to play a bonus game that lets you acquire a load of points. Hitting the Warp Star on a third level will take you to the boss arena. Boss battles require you to fling Kirby into the boss as it moves about the screen. In the case of Whispy Woods, he stays in one place. After a certain amount of hits, the boss will be defeated. Of course, there’s a catch: bosses can temporarily deactivate your flippers. If Kirby falls between them, he’ll hit a Warp Star that brings him back to the third level of the stage. This requires you to activate Warp Star again. When you successfully finish a boss, you will be taken back to the stage select screen. Finishing all of the boss battles means you will get to go against King Dedede.

And when you finish that boss fight…the game starts again. You are then given the opportunity to go through all of that again in order to add to your score. There is a nifty save feature that lets you suspend a game in order to keep your score in case you want to return to it later. Kirby’s Pinball Land is as long as short as you want it. You can play it in either short bursts or play it until your batteries go kaput. Like I said earlier, I’m not a fan of pinball but I appreciate what Kirby’s Pinball Land does. Three tables with three levels, bonus stages and challenging boss battles make this a different type of pinball game.

Whether you’re playing on a modern portable or the classic cinderblock styled Game Boy, Kirby’s Pinball Land looks good. The music is catchy and familiar; all Kirby fans will recognize the tracks immediately. Truthfully, there isn’t much to say about Kirby’s Pinball Land. Like most pinball titles, either in real life or in a video game, they’re just there to score as high as possible and have your name inserted in the scoreboard. It’s a functional title with Kirby at the center and fans of this mascot will appreciate it in small doses. Similarly, fans of pinball will get a kick out of the various gimmicks and bonuses. My biggest gripe with it is that it’s a spin-off title. Sure, it’s nothing that will tarnish the Kirby name, but it’s not going to create any new fans, either.