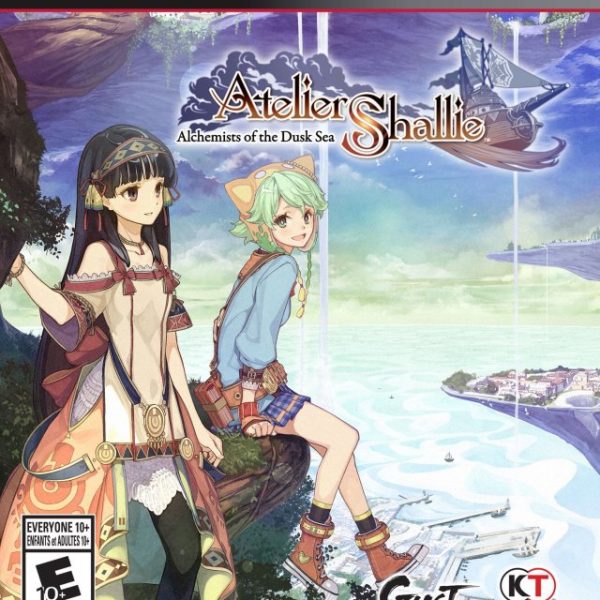 Atelier Shallie: Alchemists of Dusk Sea is the final entry in the Dusk Trilogy. And let me tell you, it’s clear that Gust meant to save the best for last. Despite Atelier Escha and Logy being rather lackluster, the entire trilogy has been enjoyable. Gust created a rich world with history and personality. I wanted to stop the Dusk since I first began my journey with Ayesha and that desire continued until the final boss with Shallie(s). Along the way, I got to meet colorful characters from various walks of life and enjoy fantastic item synthesis. I got to participate in fun battles and craft powerful equipment. All of the great stuff that makes the Atelier series so special once again got tweaked in just the right ways for Atelier Shallie and I recommend to everyone that wishes to see the conclusion to the Dusk saga.

Similar to Escha and Logy, Atelier Shallie lets you select one of two characters. Shallotte Elminus is a plucky girl living in Stellard, an oasis town that is trying to figure out how to stop the Dusk with the aid of other cities. She wishes to strike it rich one day in order to live a comfortable life with her mother. Shallistera Argo is the destined to be the next chief of Lugion Village. She has traveled to Stellard to see if they can aid in stopping Lugion’s drought. Shallistera wishes to make Lugion a prosperous village. Both girls go by Shallie, and both girls have unique introductions. By the time you get to the middle of the game, both Shallies will join together in order to accomplish their goals. You don’t have to play the game twice to see the full story, but it is recommended you do so in order to see the true ending. It’s also recommended you do this because it means you get to see Lotte and/or Stera interact with the diverse group of characters that can only come from an Atelier title. Miruca, Lotte’s best friend is a petite but precious character that uses a giant rail gun in battle. Her sister, Jurie, is a big-sister type with big dreams, big hair and big personality to match. For the first time in the series, a darling Homunculus joins the party, appropriately named Homura. Finally, my favorite character in the entire Dusk franchise is back and better than ever. That’s right, Willbell voll Erslied the amazing witch is back with more attitude, more ambition and more powerful magic. There are other characters that Stera and Lotte will meet, too. Some are from previous Ateliers and some are making the debut. Atelier Shallie has plenty of conversation that makes it easy to get to know this group of fun faces.

But the real stars of the show are the two Shallies. Lotte looks like she should belong to a hipster band, but her attitude is anything like those of that dreaded sub-culture. She’s motivated, thoughtful and would be a perfect friend to have in your corner. Stera is lovely. Her long, Cheyenne hair and determination to save her village make her a perfect leading lady. No matter which one you select, you’ll play through ten chapters in an attempt to thwart the Dusk. Atelier Shallie has the look of another Atelier title, but it’ll be clear that things have been changed in this final Dusk entry that make the game a memorable one. The most apparent change is the lack of a time limit. That’s right, you can now take your time gathering, battling and synthesizing. However, both Shallies have a Motivation Meter. As you perform the above three tasks, your motivation will slightly decrease. Low motivation means low running speed, poor combat abilities and other negative aspects. In order to keep motivation high, you need to perform Life Tasks. These run the gamut and typically offer boosts in combat experience and synthesis experience. These new features keep the game play varied. To finish a chapter, you need to perform a certain number of Life Tasks.

Most of the Life Tasks involve exploring new areas, crafting items, and/or battling. Exploring is similar to Escha and Logy. Areas will have items to gather, monsters to battle and a treasures to open. A meter will build as you perform actions that will let you fight an army of monsters, change the types of materials you can gather or let you discover a relic. By thwacking an enemy, you will enter a battle with some initiative. Battles in Shallie are turn-based and feature a system that is similar to Escha’s, but there are a variety of new features. As you damage enemies, you can stun them. Also, as you keep up the momentum, you will enter a Burst Mode which is indicated by a meter at the top of the screen. The key to defeating powerful bosses is to activate Burst Mode as soon as possible because damage dealt to enemies increases substantially and it lets you attack with team-based Variable Strikes. Also, activating Burst Mode lets you use Field Effects that can enhance everyone’s combat ability. Each character has a unique Field Effect, a unique assist attack, a unique ultimate ability and a unique guard. This, combined with all of the character’s special skills and the Shallies ability to use powerful items makes this the best combat in an Atelier yet. A final thing to note is that the difficulty can be adjusted at any time.

Of course, it wouldn’t be an Atelier without item creation. Making a variety of items is always fun, but in Atelier Shallie you can use a variety of skills to enhance items. In some ways, it’s similar to the synthesis system found in Escha. In other ways, it’s totally unique due to having the ability to chain elements together that, if done right, will skyrocket the item’s property. The end result will mean the item has much more power. The same methods can be used in creating weapons, armor and accessories. A variety of new properties along with favorites from previous entries have returned in Atelier Shallie. The alchemy system is fun, addictive and time consuming.

Atelier Shallie is the first title in the series that lets you control a 360 degree camera to explore your surroundings. You will explore a variety of wastelands that have large shells, bones of giant fish and other remnants of the ocean. A lot of detail has been put into the environments to give a sense of emptiness, yet there are some areas like the Herb Garden and the Forest of Eternal Night that are a nice change of pace. The characters themselves are creative and colorful. Most Atelier games have never had an issue with graphics and Shallie continues this tradition. The only downside is that, despite some new monster models, the game uses more recycled ones. Still, you will fight some intimidating bosses with fun and flashy special attacks that make up for this flaw. Like the graphics, Atelier Shallie’s music is top notch. Of course, you can switch the tracks around to your liking if you wish. Gust has included a massive amount of music from their previous titles that can be used in any capacity. They really went above and beyond in this department and it makes the game that much more special. Finally, both the English voice acting and the Japanese voice acting are excellent.

Excellent is the best way to describe this game. Just like other titles in the series, I can see myself going back to the game after doing everything. Earning all of the trophies will take about 60 hours since you have to play through the game with both Lotte and Stera. Finding the best properties for both items and equipment can add even more time to that count. However, gamers can play the game on a difficulty level that is right for them. Story Watch mode is recommended for people new to the series. No Hope mode is recommended for those that really want a challenge. There is something for everyone in Gust’s final entry in the Dusk Trilogy. I’m glad that I saw everything through to the end. If Atelier Escha and Logy left a sour taste in your mouth like it did mine, you will be pleasantly surprised by Atelier Shallie: Alchemists of Dusk Sea. Check this game out and embark on a final, epic journey with two lovely alchemists.