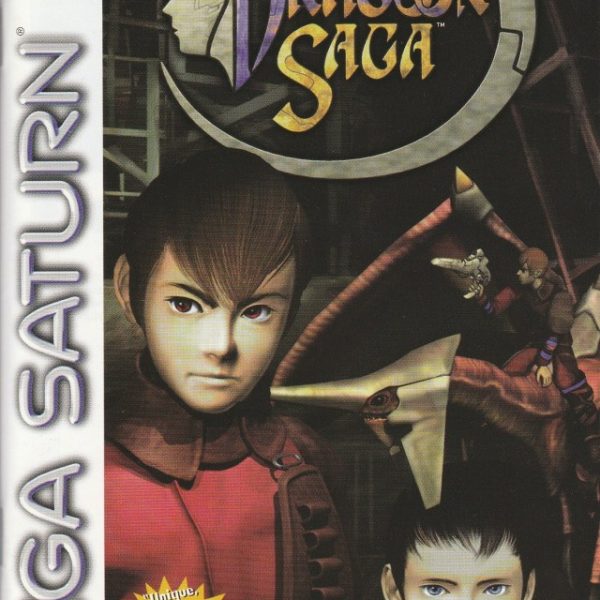 I’m still in disbelief that I’m able to write a review for Panzer Dragoon Saga. This is a game that I have always wanted to play for years upon years. Its high price and insane rarity made it seem like nothing more than a pipedream. In fact, for a long time I thought that the game only existed in the online world; distributed by greedy scalpers that wanted nothing to do with the game and just hoped to make a few extra dollars. When I finally found the game (and held it to make sure I wasn’t hallucinating) I realized that an opportunity like this wouldn’t come around again. I took the plunge (paying less than I would online) and finally got around to playing this magnificent title. Going through Panzer Dragoon Saga reminded me why I enjoy RPGs so much and makes me question why other game developers don’t learn from all of the things it did right.

Panzer Dragoon Saga takes place after the events of the first two Panzer Dragoon titles on the Sega Saturn. Luckily, you don’t need to play them in order to fully appreciate and enjoy the story in Saga. There is a lot of history in the Panzer Dragoon world, but the focus in Saga is given to a boy named Edge. An orphan without much of an identity, Edge makes a living by performing odd jobs. His latest job is at an abandoned ruin. During his exploring, his team excavates a girl that is trapped in a wall. Upon this discovery, the people that hired Edge’s group begin to turn their guns on Edge and his crew. Edge is the only one that survives this traitorous attack and ends up in a deep cavern beneath the ruins. As chance would have it, Edge encounters a dragon from ancient times. The two form a bond, allowing Edge the freedom to escape the ruins. Now, Edge wants to avenge his comrades.

Panzer Dragoon Saga starts with a bang. There are tons of questions that are just begging to be answered the moment you are able to control Edge and his dragon. Why did Craymen, the story’s main antagonist, murder Edge’s friends? How did the dragon know about Edge’s location? Who or what is this dragon? Who was that girl that was trapped in stone? You’ll get your answers, and doing so means you get to experience a powerful narrative. Panzer Dragoon Saga’s momentum keeps up the pace from the introduction to its closing. There is never any need to go on a silly fetch quest. There is no long winded introduction. There is no filler. Every moment of the story deals with Edge’s goals and the world he calls home. It’s a fantastic journey that is enhanced by fantastic characters, villains and lore.

The game offers a familiar yet distinctive method of exploring. The world map uses a classic point and click interface. In towns, Edge will explore on foot. Anyone familiar with RPGs will feel right at home as they interact with locals with plenty to say, purchase goods from the shop, or examine their surroundings. Pressing the examine button brings up a reticle that is used to select various things. One of the most unique features in PDS is that Edge will say something different depending on whether the object or person he examines is near or far. For instance, examining a cart from a far distance will cause him to mention that the cart looks old. When he examines it up close, he’ll mention that the cart has writing on it. It gives the world more personality, especially when it’s seen through Edge’s eyes. In areas with enemies, Edge will ride his dragon. There are destroyed landscapes, uninhabitable deserts, endless oceans and more. Again, the reticle can be used to examine, break or interact with a variety of objects. Examine fish swimming in a stream to make them jump. Examine plants to make them generate some pollen. Each area you explore is littered with little touches.

Of course, joyriding through the air can be abruptly halted by battle. Panzer Dragoon Saga’s battle system combines the quick reflexes of a rail-shooter with the turn-based nature of a classic RPG. Each battle is different from the last because it’s important to always be on your toes to figure out the best strategies to defeat your enemies. In battle, your dragon has three Burst Gauges that will automatically fill, similar to the ATBs in Final Fantasy titles. When one is filled, you can attack with Edge’s modifiable gun, attack with the dragon’s homing laser that is mainly used to hit multiple enemy parts, use an item or use certain Berserk Abilities. Berserk Abilities are the game’s version of magic. When two BGs are full, you can execute more powerful Berserk Abilities. Finally, when all three BGs are full, you can use the most useful and/or powerful Berserk Abilities. Idly flying and waiting for your gauges to fill is not a good idea since enemy’s can circle around the dragon and attack. This is where the dragon’s movement comes into play. You can circle around your enemies to expose their weak spots and/or get into a safe zone. A radar represents which areas are dangerous (red) or safe (green). When you move your dragon, the gauge will not fill. Therefore, you need to plan the best times to move, charge, and attack. Furthermore, some enemies are resistant to the dragon’s laser or Edge’s gun. Like I said, no two battles are alike.

And that’s just the start of it. All of these options are available to you the moment you gain control of the dragon. However, after a certain point in the story, your dragon will morph into a more powerful form. This will increase its laser power and allow you to manipulate its parameters. That’s right; you can alternate your dragon’s statistics to change its look and its abilities. Do you want to create an aerodynamic speed demon? How about a lethal Berserk using menace? You have the option to mold your dragon’s four statistics (attack, defense, spirit and agility) as you see fit. Each form has its own abilities, advantages and disadvantages. Furthermore, the rate at which he learns new Berserk Abilities is affected by its form. Upon leveling up, you’ll gain an increase in laser and gun power, but you might learn a new trick to wreak more havoc on your enemies. Your dragon will continue to evolve over time.

Panzer Dragoon Saga has a battle system that is fun, challenging and captivating. Bosses require their own unique strategies. With an ample supply of healing items and the ability to change both the dragon’s abilities and Edge’s gun on the fly, battles have a challenging yet accessible difficulty level. When a battle ends, you’ll be given money and experience. You’ll also be given a rating. The better you do, the better your rewards. Finishing an enemy for the first time will unlock data about it so you can read about its vitals and history.

Everything about Panzer Dragoon Saga sounds great so far, but some of you might be wondering about the game’s look. Indeed, the Sega Saturn is the console of choice for 2D presentation and, clearly, Panzer Dragoon Saga is rendered in full 3D. While some of the character models are slightly gaudy, the majority of the game is gorgeous. Besides, the epic music will distract you from anything your eyes find bizarre. Team Andromeda went above and beyond creating a fantastic and imaginative world. Most of the game’s story is advanced in high quality FMVs, complete with epic music and voice acting. The majority of the game is voiced in Japanese. Fans of the Panzer Dragoon world might remember that the game developed its own language. Don’t worry; it’s there. Have I mentioned that the music is epic yet? Yeah, a few times. I’ll mention it once more: the music in PDS is epic.

If you made it to this point in the review, you probably have two questions. First, does Panzer Dragoon Saga have flaws? No, it does not. Everything about the game is flawless. Some might frown on the 20 hour length. Some might dislike the random battles. Some might find certain boss battles too challenging. The other question, and the one that is on everyone’s mind the moment they hear the name “Panzer Dragoon Saga” is this: is the game worth it? That’s something that you will have to answer for yourself. The cost of admission for PDS is high, especially if you look for it from an online retailer. On the other hand, the game is unlike anything I have ever played in all of my years of gaming. It’s rare for me to play something that stands out from the crowd while managing to do everything right. The story, characters, setting, graphics, music, battles, and everything in between in Panzer Dragoon Saga are top-notch. Keep in mind that this is a game that was released in 1998; many years and games have come and gone since then. And yet, I’m excited about playing PDS for years to come instead of something more contemporary. It takes something special to give me that feeling. Panzer Dragoon Saga does just that.

Overall, 10/10: Panzer Dragoon Saga is practically flawless in every way.