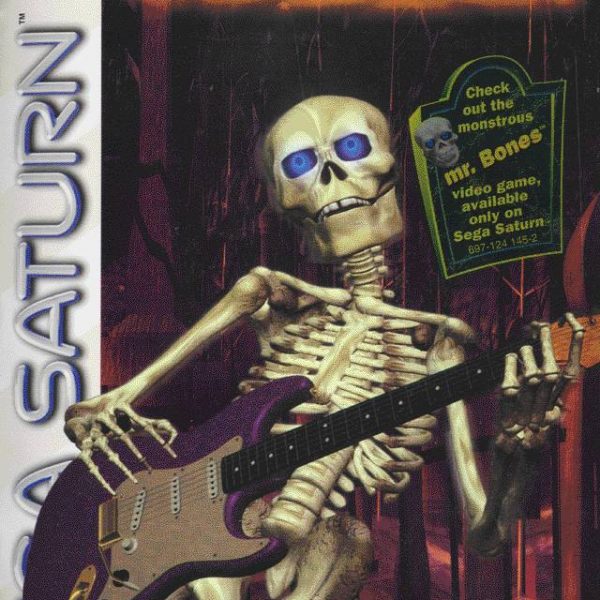 Mr. Bone is a unique title for the Sega Saturn. The biggest reason behind such uniqueness is that the game covers a bunch of genres across it’s varied stages. It combines platforming, rhythm, shooting, and pinball just to name a few. With so much variety and the promise of a blues inspired soundtrack, it’s a shame that Mr. Bones falls on his skinless cranium more times than not. The cover art of Mr. Bones features the titular character with blue eyes, a rockin’ guitar and a welcoming smile. My impression was that the game would be accessible to gamers of all skill types, but due to some issues and some hair pulling difficulty in its later stages, Mr. Bones comes recommended only to patient gamers.

It’s a shame that the game play is so hit or miss because the premise of Mr. Bones is great. It’s goofy, campy, cartoony and you’ll be routing for Mr. Bones from the get-go. The story begins with a red-eyed sorcerer with a Richard Simmons inspired haircut named DaGoulian resurrecting the dead. He wishes to cover the world in darkness in order to achieve true peace. DaGoulian pounds on a series of red drums that wake the dead from their slumber and infuses skeletons with a power called skeletism; a portmanteau of “skeletal” and “magnetism.” The skeletons reanimate with red, glowing eyes. However, one skeleton retains his free will while his eyes turn a bright tint of blue. This is Mr. Bones, and he needs to find a way to stop DaGoulian. Of course, the sorcerer realizes this anomaly and sends his skeletal army after him. That’s not all. Mr. Bones needs to deal with zombies, bats, spiders, robots, dinosaurs and much more. The odds are against our hero, but Mr. Bones never lets said odds get to him. Always ready with a quip or a comment, Mr. Bones takes everything in stride. During the adventure, you get to watch him rock out on a guitar, sing the blues, and win the heart of a lady. Mr. Bones’ tale is a fun one.

Unfortunately, getting to see it to the end is where the problems begin. From the moment you take control of Mr. Bones, it’s clear that seeing the end is going to require plenty of retries and patience. On the top of the screen is Mr. Bones’ health meter, indicated by the word “BONES.” As Mr. Bones takes damage, the letters start to fall off. Touching glowing blue objects such as skulls, butterflies or flowers will restore his energy. However, taking damage also causes Mr. Bones to lose parts of his body. You could have a full health bar, but be jumping around on one leg. To restore his body, you need to tap the A button to charge up a blue outline of the word “BONE” when a spare bone appears. This will cause his skeletism to reattach a bone. Mr. Bones isn’t completely defenseless. He can fire a small beam of skeletism at his foes and cause them to explode. Most of the time, the above mentioned remains constant.

This variety is both a good and a bad thing. Some of these stages are an absolute blast. Since music plays a big role in the game, it would have been an excellent choice to include more stages that include playing an instrument. Some stages are frustrating, but with some pattern recognition and practice they can be finished. For example, one stage tasks you with retrieving Mr. Bones’ body parts from bone-swiping bats. Since the controls aren’t as tight as other platformers, there is some frustration in accomplishing this goal. Mr. Bones’ beam isn’t very effective, either. But, practice pays off. But then, there are the stages that seem unfair. One of the most grueling challenges has Mr. Bones walking from one end to the other on a frozen lake. The slightest misstep will cause Mr. Bones to fall in the water. Most of the lake is fragile, so you need to jump on frozen blocks beneath the ice in order to get to the end. None of the stages have checkpoints. Thus, getting a game over takes you back to the start menu. While you can continue from the most recent stage, going through the main menu and dealing with some loading times mounts the frustration. Little things like a checkpoint system, a retry screen, and/or a restart option would have gone a long way in order to make up for the controls being slightly unresponsive. You need to suffer through the bad before you can get to the good. There are times when it won’t feel like the good was worth the trouble.

Mr. Bones is a fantastic looking and sounding game. The multiple videos that advance the story feature live actors, computer graphics, hilarious conversations, and some impressive scenery. It would have been great to have more of these. One of my favorite moments is watching Mr. Bones effortlessly play the guitar while singing the blues about being stuck on the moon. The in-game graphics are fine, but some environments lack important details. Going back to that stage with the bats, it’s not always clear what Mr. Bones can and cannot jump on to reach a different area. Some of the stages lack music. This is another slap in the face because when the music does play, it’s great. I would have been fine listening to the same tracks instead of nothing at all. Finally, the voice acting is fittingly over the top. Mr. Bones sounds like a Memphis born and bred blue musician.

Finishing Mr. Bones a first time can take up to ten hours. Once a stage has been completed, you can revisit it as often as you like. For those that find the challenge of certain stages too great, a code can be entered to select any of the stages. Something worth noting is that Mr. Bones contains two discs. The second disc features the excellent soundtrack as well as bonus that shines some more light on the history of Mr. Bones and DaGoulian. For gamers with a more advanced skill level, Mr. Bones is recommended due to its variety. Those that are looking for something easier shouldn’t be fooled by the games welcoming cover. It’s a shame that this is the only time we will see Mr. Bones. With enough care, I feel that Mr. Bones could have expanded into a successful franchise that incorporates its goofy setting and wonderful music.

Overall, 6.5/10: Varied level designs with finicky controls outshine Mr. Bones as a character, as a musician, and as a hero.