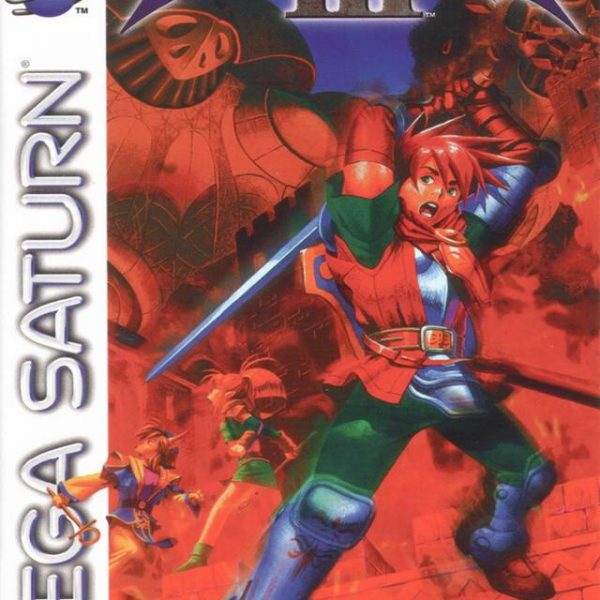 If there was ever an RPG series that deserved more attention, it’s the Shining series. My theory is that its home on Sega consoles caused it to fade into the background as other, heavier hitting franchises started to find their place with Nintendo and Sony. Even after Sega stepped out of the console business, it felt like the series couldn’t gain popularity. Now, the series gets barely any coverage outside of Japan. It’s a real shame; there are some great titles in the Shining series. Shining Force III is a perfect example of this. This Sega Saturn exclusive has nearly everything that a fan of tactical RPGs could ask for. Its biggest flaw is not part of the game. Containing three separate but overlapping stories, the Japanese version of Shining Force III was released in three volumes whereas the North American and European versions were left with only the first entry.

But, as a standalone title, Shining Force III is a solid adventure. Taking place in a vast world, the two major countries of focus are the Republic of Aspinia and the Empire of Destonia. Before the game begins, the two countries were at war with one another. Now, a tense peace keeps war at bay. The game begins with us watching a meeting between Aspinian and Destonian officials, along with the hero: Synbios, a capable soldier that has the charisma and courage worthy of a squad leader. Synbios and these aforementioned higher ups are at a peace conference in the neutral city of Sarabrand. While tensions between Aspinia and the Empire of Destonia are high, there is hope that peace can finally be achieved at the conference’s conclusion. However, a group of zealots called the Bulzome Sect hope to disrupt that peace and increase the tension between the two kingdoms. Kidnapped royals, political conspiracies, backstabbing allies and much more are waiting for Synbios as he tries to unite the two major countries.

Shining Force III’s story is excellent. It starts strong and it carries that momentum throughout the entire journey. The unfortunate thing is that it’s only one part of a three-part set. We get to see the tale from Synbios’ point of view. The second scenario was supposed to take place from the prince of Destonia’s point of view. The third and final scenario followed a mercenary that was briefly encountered in the previous two scenarios. Synbios meets a huge cast of heroes and villains, but only a fraction of them will be part of his story. The good news is that a wonderful script develops them into likable characters. While some characters don’t share the spotlight as much as Synbios and his initial crew, they still have plenty to say and offer.

While a strategy RPG at its core, Shining Force III features traditional RPG elements. After the introduction, you get to take control of Synbios and explore the town of Sarabrand. Situations like this are the norm. You can speak with the townsfolk, enter houses to raid shelves, shop for items and weapons, go to a blacksmith to have unique equipment forged, and head to a church to save your game. Each town also has a homebase where you can talk to your teammates and get their insight on the current situation. The homebase allows you to place items to storage, pick your teammates for battle and get a reminder for your next objective. When most people think of an RPG with tactical battles, they think of a linear quest that takes you from battle to battle. While Shining Force III is linear by design, it’s refreshing being able to explore towns, the world map, and dungeons. The only area that needs improvement are the menus. Equipping weapons and accessories, transferring items between party members, and shopping become cumbersome due to a combination of the menu’s layout and character’s only being able to hold four items.

Once you muddled through the item and equipment screens, it’s time to put all of that preparation to work in a battle. These are Shining Force III’s best feature. Battle fields are divided into squares, with each unit occupying one. Synbios’ party can have up to 12 characters at a time. This can make the battlefields slightly crowded; especially when you factor in tight spaces like bridges or hallways. Agility will determine who acts first. Once the unit with the lowest agility finishes their turn, the turn order starts over. Moving your character next to an enemy lets them perform a standard attack. Some characters can pelt a foe with arrows and/or magic while remaining a few squares away. Standing next to a character will let you use or transfer an item. Shining Force III covers the basics, but there is more to it as you get further in the quest.

At the end of characters’ turn, there is a chance that they will learn a special attack. These activate randomly when you have your character utilize the attack command. Instead of performing a standard attack, there is a chance that your character will perform a devastating display of power. Terrain plays a role in the potency of attacks, too. Similar to other games in the genre, certain weapons are more effective against others. One of the game’s most important features is that characters can form bonds with one another that grant bonuses to base statistics. By attacking the same enemy and/or healing allies, characters will grow in friendship. Surrounding your characters with your friends provides a huge bonus. However, if an ally falls in battle, their trust for Synbios goes down. If Synbios falls in battle, you lose half of your money and need to start the battle over. Luckily, you retain all of your experience points. Upon leveling up, characters will gain an increase in stats. Some will learn a new spell or get a previously learned spell powered up. Obviously, battles are fun. Synbios commands a diverse bunch that have no problem achieving victory. There are few battles that require more careful planning and a bit of luck, but even these can be properly dealt with thanks to the ability to save at any time and/or restart the battle with all of your experience. Best of all, characters can gain a substantial increase in power after they reach level 10 and earn the right to move up a class.

Shining Force III has a fantastic look. During exploration, you are treated to colorful and vibrant 2D sprites that explore an isometric 3D world filled with diversity. With the shoulder buttons, you can rotate the view 360 degrees. When actions are taken in battle, you see 3D character models perform an array of attacks that range from basic to ballistic. Certain spells cause the screen to flash bright colors at rapid speed. It can be a bit much, but I appreciate the developers trying to convey the effect of their potency. The music comes from Motoi Sakuraba. Even after all of this time, his style is still easily recognizable. The majority of the tracks are memorable and worth listening to even after you stop playing. Finally, we have the voice acting. Ah, the voice acting. I feel that this is one of those instances where the voice acting is so bad that it’s good. Everyone’s mileage will vary on this; you have the option to turn it off if you can’t handle it’s cheesiness.

Shining Force III has a fair amount of hidden content, but the main journey can be completed within 30 to 40 hours. After the game ends, it’s clear that it’s final moments are trying to set things up for the second scenario. It’s unfortunate that we never got the chance to experience that. As a standalone title, Shining Force III is something special that shows how much the Shining series offers the RPG genre. I recommend this game to all fans of RPGs, no matter how familiar they are with the series. I hope that there will come a time that the series gains more recognition and maybe, just maybe, we will get the chance to experience the remaining scenarios in the Shining Force III world.

Overall, 8/10: Shining Force III has all of the trimmings of great strategy game. It’s unfortunate that its entire story isn’t fully told.