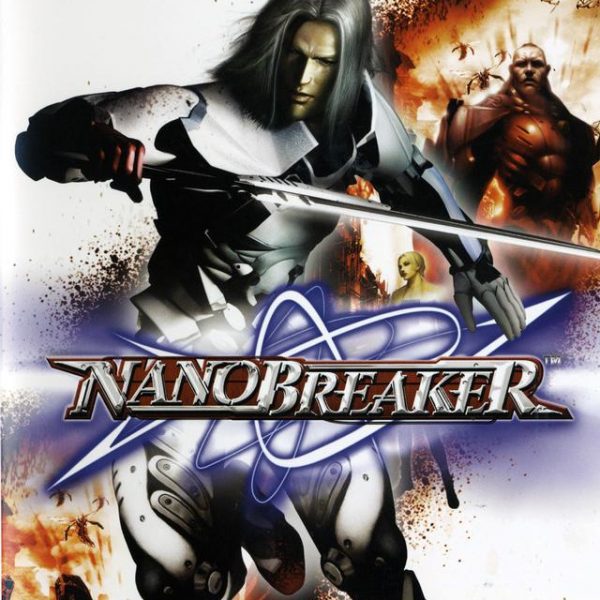 Author’s Note: This review was originally published on November 16th, 2005. My opinion on this still holds; Nano Breaker is an absolute disaster of a game.

Ya know, I really had high hopes for this game. It was cheap when I first purchased it, it was created by Konami, it apparently had a deep combo system, and there was more blood than Mortal Kombat. Well, despite all of that being true I was so disappointed by this broken game that I decided to…yes…trade it in for credit even before I completed it! Yeah folks, it was that bad.

Nano Breaker takes place on Nano Island and stars Jake, a cyborg from an old war who was frozen for 7 years. He has been awakened to help stop the orgamechs, living creatures that have been effected by malfunctioning nano cells. At one point nano cells were used for the good of man kind, but since someone tampered with the main computer, things have gone a bit awry. A female scientist has been sent to shut things down, and Jake is sent after her to make sure she completes her mission while killing any orgamechs in her way. Jake’s war rival, Keith is also on the island and just wants to give Jake a hard time. This is one of the most cliche sci-fi stories I have ever heard, and the “plot twist” at the end can be seen from a mile away. I mean really, a sci fi setting is cool and all but try something original! The whole technology vs. man thing is getting old! The characters aren’t anything interesting either. Jake hardly looks like a soldier cyborg with his silver hair and good looks.

The only good thing this game had going for it were it’s graphics, and even that’s a stretch. Sure, the gallons of blood pouring, dripping, and falling every which way is fun at first and you can choose it’s color, but the character designs and enemy models are very blocky and uninspired. You fight the same monsters at the end of the game that you see at the start of the game, only with different color schemes and attacks. The movie sequences could be better, they are rather cheesy and some of the animation appears poorly done. Backgrounds all look the same no matter where you go, maybe with the exception of the last area. Besides the afore-mentioned blood being fun, the other good part about the game’s graphics are witnessing the combos. Jake is given a weapon that morphs into other weapons instantly such as a boomerang and an axe. Watching Jake perform some very cool combos can be quite a sight to behold. However, pretty combos and heavy blood shed don’t save Nano Breaker from it’s awful game play. Besides, the voice acting is poor, if not foregettable. Hell, I can’t remember what anyone sounds like. The music is the same way. It’s piano and electric guitar mixed together, but in a bad way.

First off the camera is one of those that always follows Jake behind the back. At first things seem ok, but when it comes to jumping across harmful things or fighting tons of enemies, the camera gets messed up. You can set it behind you with the click of a button, but by the time that is done you may have received damage. At the start of the game Jake can’t do much. He has access to a few combos, he can dodge roll, he has a whip that brings enemies close to him, and he has one of the lamest jumps in action game history. To get more combos, you find combo chips and equip those. You have a Final Fantasy X Sphere Grid type of system with the combo chips and equip them to form longer, more powerful attacks. Usually, they are easy to pull off. However, you’ll find yourself using the same combos time and time again because the others are just useless. Another thing Jake has is the Booster system. These are just abilities Jake can use when his Booster gauge, which is filled by killing foes, is full. They are only useful in some instances, so once again this is just something that will be over looked. Jake eventually gets abilities to double jump and glide, which are used for puzzles. Let me just say, that these jumping puzzles are some of the most annoying things ever to exist in an action game. The camera is horrid, you’ll miss jumps constantly and fall to your death. It really gets frustrating.

Enemy AI is rather stupid. You’ll see enemies hunch towards you apathetically and then miss entirely with their attacks. Some bosses are challenging, but even these are a stretch. So why did I die so many times on some? Well, when you die in Nano Breaker, you start with the amount of health you had at your last save point. Oh yeah, that’s right. Sure you get Life Ups and Booster Ups by killing enemies, and sure some monsters drop life recovery items…but it doesn’t help. It’s just another annoyance to the already broken game play. Another thing that ticked me off was when you had to escort Michelle, the scientist sent to shut down the main computer. Not only does she get attacked by your own hits, but she runs towards the enemies like a moron! Ugh…game play over all is broken.

Once the game is completed, there is no reason to go back for more. You may unlock a new mode and you can view all the movies again, but what’s the point if the game play is broke? There isn’t. Don’t bother renting it, and certainly don’t buy it. It may look like fun, but it isn’t. With all the great action games out there, you’re better of sticking to something else.