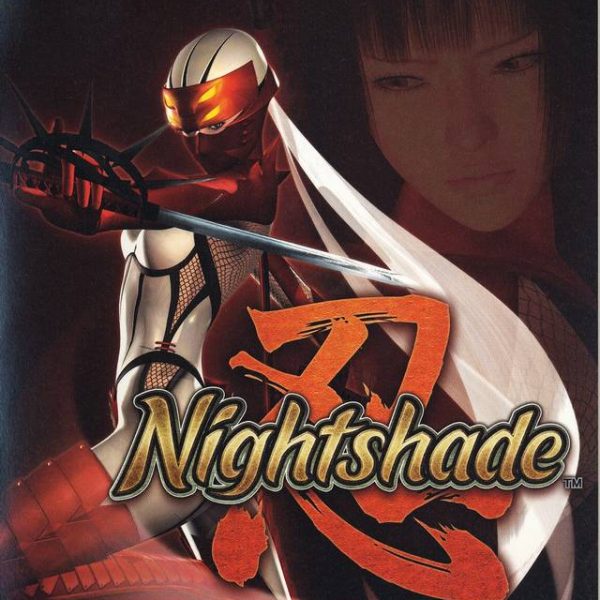 Author’s Note: This review was originally published on September 9th, 2004. I remember writing this while sitting in the school’s library, and waiting for my study partner to arrive. I got there extra early, so to kill time I wrote this.  It’s definitely one of the messier ones I’ve written, but I hopefully got the point across that Nightshade is worth the time to play.

After playing Shinobi for the PS2 (and getting owned by the difficulty more times than I can count), I realized that there was a serious lack of fast and fun action games that were really challenging. Some of the games that were action-oriented relied too much on flashy graphics while others had lame game play. So I figured that the next best thing would be the sequel to the PS2 Shinobi…and it was! Challenging and fun, Nightshade delivers everything a hard-core action gamer is looking for.

Story: 6/10
Many moons have passed since Hotsuma destroyed the evil sorcerer devastating Tokyo with the cursed Akujiki blade. Now, the Nakatomi Orginization has been found looking for shards of the sword in order to take over Japan with it’s awesome power. Hibana, a female ninja working for the government has been assigned to stop the company and bring the shards of the blade back to the government. Little does Hibana know that people from her past will be out to stop her from completing her mission. That classic formula may not equate to the deepest of stories, but there are still twists and turns along the way to keep you playing on. What I mainly liked about the story was the setting: a futuristic styled Japan. I also liked the characters, especially Hibana. She takes no crap from no one and will kick anyone’s ass without a second thought. She has the skills to go along with that attitude, too so it’s not like she’s all talk and no action.

Game Play: 10/10
With controls tighter than Hibana’s pink outfit, the game play is the greatest part of Nightshade. Hibana can perform moves like Hotsuma. She can stealth dash, double jump, and slash with her sword. She has the same ninja magic as well. Like the last game, you can do air assaults allowing Hibana to never have to touch the ground as long as there are enough enemies in the area. You can jump, slash, jump again (or dash), and slash, and continue on doing this type of process until all the enemies are gone. The more enemies you kill, the more power your sword gains. Like the last game you can perform a tate with four or more enemies on the screen. You’ll see a tate meter on the top of the screen to let you know how much time you have before your potential tate ends. Hibana also has some new skills in her aresenal. First off, she can do a powerful kick attack. While it won’t damage enemies, it will shatter armor on enemies on bosses. She can also whip out her two short swords for deadly close up combat. Her short swords allow her to increase her chakra gauge, which will allow her to perform a very deadly attack (which is needed for most bosses). Finally, Hibana can kick up an enemy and follow that attack with a downward kick. This will cause a shockwave that will stun all enemies. Other things like shuriken throwing, shuriken bursts, secret coin hunting, and wall climbing are all back. You will have to use all of Hibana’s attacks to succeed in the levels. Players of Shinobi will be able to pick up the game easier than someone who has never played it before. However, the game is still very difficult. Most of the time, you’ll die because of bottomless pits. You rarely get overwhelmed by enemies. Fortunately, most of the levels consists of about four or so stages so you don’t have to start at the very beginning when you perish. Also, Hibana’s life doesn’t get drained like Hotsuma’s did. Most people will find this game to be too challenging. But, it isn’t impossible. You’ll probably get plenty of game overs, but don’t give up. The very responsive controls never fail you, so if you keep at it you’ll be able to conquer the stages. The boss battles are a little different in Nightshade. In Shinobi, all you had to do was beat all the baddies around the big boss and then slash the boss with a powered up sword. This time, you may have to shatter the bosses armor first, then use ninja magic, and then use a combo. Or maybe you’ll have to kill all the enemies without touching the ground and then charge up for a Stealth Attack. It depends, but all bosses are challenging and fun.

Graphics: 7/10
The stages are a little bland, although there is a lot of variety. Hell, the first stage has you fighting on top of a fighter jet. Still, the environements lack a lot of detail and appear only as buildings and walls. Fortunately, a lot of the things in the stages can be destroyed to reveal hidden items. The character models are a lot sharper than they were in Shinobi. While Hibana doesn’t have that fun scarf, she still looks fierce as hell in her outfit. There are also FMV movies that play before and after the stages. They look nice, but the characters seem to act a little…choppy. In any case, the graphics look nice and get the job done.

Music and Sound: 7/10
The tunes aren’t anything noteworthy or memorable. I remember putting in a CD while I played most of the time. It’s not that the songs are bad, but they’re just boring for the most part. The voice overs, however, are done very well. The actors fit each character’s personality perfectly.

Replay Value: 9/10
After you beat the game, you can unlock new characters. Also, there are missions, time trials, and survival courses to be unlocked by uncovering the secret coins. You can also see art from the game by collecting cards. All this and three difficutly levels add up to a game you’ll be coming back to again and again.

Buy or Rent: Rent
The game is short and can be compelted in a rental period. While the cost is cheap today, I’d still stick to renting it. Some may find it too hard.

Hibana is the coolest female ninja yet. Ayame has got nothing on her! For a fast paced, action packed game full of high flying ninja action, Nightshade is the game to play. Just don’t go in expecting a cake walk.