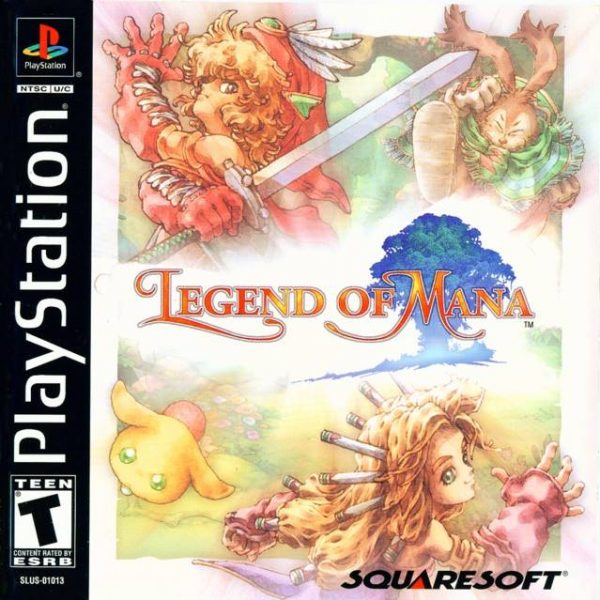 Author’s Note: This review was originally published on March 16th, 2009. I remember going to the store with some birthday money and debating whether or not such an odd sounding game would be worth my time. It absolutely was; years later I wrote this review. Like other reviews of the time, this one features “witty” taglines for each section.

Ah, Legend of Mana. A classic Squaresoft title that almost makes up for the lack of a USA release of Secret of Mana 2. Legend of Mana is the fourth installment in the less than appreciated Mana series. Besides the release of it being directly after my birthday, Legend of Mana provided me with hours of entertainment due to the interesting world-builder mechanics, endless customization options, and fun setting. There were a few problems present, but the finished product was an overall success and comes highly recommended.

An Artifact Adventure.
Legend of Mana tells the story of the world ruled by the Mana goddess. In ancient times, the Mana goddess sealed parts of the world in creations called artifacts due to the people losing faith in her. You have been chosen to take the artifacts you discover and create the world as you see fit. Ultimately, you must revive the Mana tree and understand the reason behind the goddess granting you this peculiar task.

The above is the overall plot of Legend of Mana. However, the true story is actually a combination of about 70 mini-stories, some of which revolve around the Mana tree and the Mana goddess. This may disappoint those who were looking forward to a true follow-up title to Secret of Mana, but I can assure you that the way story, and the mini-stories, are told is interesting. Unfortunately, your main character (either a male or a female) is anything but interesting. Your character plays the silent protagonist, which usually means little to no development. The NPCs, however, get a tad more fleshed out when you near the end of all the stories.

Water Color World.
Remember the sleeper-hit SaGa Frontier II and the gorgeous visuals it had? Legend of Mana uses a similar style, except there is more color, more of a fairy-tale element, and more variety. Obviously, the environments are absolutely stunning. Heck, they give the recently released Odin Sphere some tough competition. In the environments are 2D sprites that can move in eight directions. Again, these look excellent. They have a look that combines the technology of the Playstation with the nostalgic flavor of the SNES. Other graphical aspects are lovely character portraits, fun animations everytime you use an artifact, and some flashy special attacks. The graphics in Legend of Mana are simply stunning and there is no other way to put it.

Correct Creationism.
The heart of Legend of Mana consists of you taking the artifacts you find from the mini-story events and placing them where you wish on a giant piece of land. At the start of the game, you only have a couple of artifacts. Near the end of the game, your world will be so grand, you will wonder if you have enough empty land space to go around for the remaining artifacts.

Once you place an artifact on the map, a town or dungeon is permanently set on that spot. When you enter the new town or new dungeon, you are most likely granted a mini-story. Finish the mini-story, and you not only will earn items and money, but the possibility of a new artifact. This cycle continues until you get a key artifact that allows you to finish the game. The concept is interesting, and for the most part, fun.

Your first artifact is the Mailbox. Using this creates your home-base. It is here you can raise monster pets to bring to battle, create golems to bring along in battle, forge new weapons and armor, create magical instruments, and so much more. Thus, when you are in no mood to finish someone’s fetch quest or save a friend, you have plenty to do to pass the time. The customization options are truly unique, offering plenty of micromanaging. Unfortunately, it is these same customization options that can be easily overlooked. Golems are useless, and the same can be said about the instruments that allow you to cast magic. Still, they are still fun to play around with. The same can be said about the placement of artifacts. Creating your world is a fun experience.

Swords, Spears, and Axes! Oh My!
There are a total of eight weapons that your character can use. Each weapon grants the player to learn a set of deadly skills and create combos. Obviously, these are used in battle. Battles occur at a fixed rate, and most can be over in a matter of seconds. Certain bosses are difficult only due to the fact that they take up the whole screen, thus making it difficult to maneuver. Besides being able to equip a variety of special skills, your player can equip abilities. These allow you to do things such as jump, spin, push the enemy away, back-dash, etc.

Despite the variability of the battles, they have a tendency to cause you to button mash. Most of them consist of you using your favorite combo, building up your special attack meter, and executing a killer-move. After an enemy dies, they leave behind experience crystals and money. Instead of getting a set amount of points, you have to gather the crystals left behind to gain levels. This may sound like a downer, but it hardly makes a difference. Also, it will many hours to master all of the weapons and abilities. The battle system is a little odd at first, and the AI that takes over an NPC is idiotic, but much like the world creation system, the end result is interesting and fun.

Tone it Down.
The music in Legend of Mana is a mixed bag. The music in towns is peaceful, relaxing, often-times haunting and eerie. In the dungeons, the music is dramatic. Sometimes, overly dramatic. None of the quests in the game are too serious, so having such crazy music in the background seems a bit odd. The sound effects work for the game. Like many PS1 games, there is no voice acting. The only voice you will hear is during the opening theme song. All in all, the music and sound get the job done, although sometimes the music seems out of place.

A Whole New World.
Players may unknowingly complete the game in less than ten hours. While this may seem like a downer, it is actually a plus. Legend of Mana is meant to be played multiple times. Besides, after you finish the game, all of your stats and items carry over to the next file. If you missed a quest or an artifact, worry about it during your next game. Legend of Mana is far from being the Secret of Mana sequel many gamers hoped for, but that does not stop it from being an exciting, and very unique, adventure. The game does have flaws, but it is still worth the time to play. Playing a god has never been so much fun thanks to Legend of Mana.