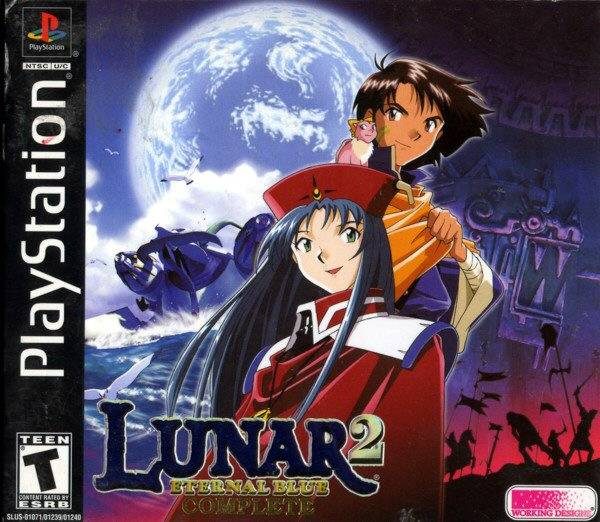 Author’s Note: This review was originally published on April 14th, 2008. Like other reviews of the time, this one features “witty” taglines that separate each section.

Working Designs took it upon themselves to re-release the critically acclaimed LUNAR: Silver Star Story. After ages of delays, gamers finally were able to replay a semi-exciting, old-school tale on the PlayStation. It only made sense for WD to decide to re-release the second LUNAR title, Eternal Blue. With this announcement came plenty of details, as well as delays. Unlike the first LUNAR, the delays and the steep price were well worth it. LUNAR 2: Eternal Blue Complete is an excellent game, and has that X-Factor missing from the first LUNAR.

A Hero Named Hiro.
Our story begins with the adventurous Hiro. Traveling alongside the pink, flying-cat Ruby, Hiro loves going through ruins and learning of the world’s history. One of his favorite stories is about a group of friends that stopped an evil wizard using the help of four dragons, and their bond of friendship. One day, Hiro and his grandfather decide to explore a large tower in hopes of finding treasures. Hiro ends up finding a gorgeous woman named Lucia, who emerges from a large, blue crystal. Who is the mysterious woman? Will she allow Hiro to learn more about the world of Lunar?

Similar to the first LUNAR, Eternal Blue’s plot is predictable. However, it is also more enjoyable. This time, the characters have more personality, more charisma, and more development. Unlike the quiet Alex, Hiro has plenty of stuff to say and is never afraid of sharing how he feels. This made controlling him far more fun than controlling Alex. The same can be said about Hiro’s friends.

Copy and Paste.
Players will immediately notice that the graphics were left unchanged for the second LUNAR. I approve of this choice, considering how much I enjoy old-school charm. The 2D graphics do a great job of portraying the story. Not only are there beautiful portraits of the characters that get displayed during the conversations, there are far more anime scenes this time around. Whether you are on the field or in a battle, the graphics look the exact same as they did in Silver Star Story. A good thing? I think so.

Singing the Blues.
Unlike the first game, Eternal Blue does not revolve around the theme of music. However, this does not mean that the soundtrack is poor. In fact, most of the tracks in Eternal Blue were excellent. For those who played the first game, you will get to re-hear some of the songs from Silver Star Story. One thing you will also hear that is similar to the first game is excellent voice acting. The actors and actresses did an impressive job of giving each character more, well, character.

Speed Up. Slow Down.
Eternal Blue is almost the total package, but there are a few things that will annoy you. The first comes with travel. While it is similar to the first LUNAR, you will notice that Hiro moves differently than Alex. In a town, their movement speeds are about the same. In a dungeon, things are a bit more annoying. Hiro walks at a slow pace in dungeons. If you see an enemy and wish to not fight, you can hit the run button to make him use a burst of energy and speed away from a potential fight. This sprint will last only a few seconds. Why they did this is beyond me, but it was highly unnecessary. First, there is no indication of when the energy burst can be used; you just have to wait a certain amount of time for Hiro to recover. Second, enemies move far quicker than Hiro’s normal pace. Finally, dungeons are long. Getting out of a maze or labyrinth quickly is not an option considering how slow Hiro moves.

Enemy Encountered.
Even if you manage to flee away from one fight, another monster is right around the corner. Luckily, the battle system has been slightly improved from before. Obviously, each character has their own style and equipment, but the fun does not stop there. Each character has access to far more skills than the characters in Silver Star Story. Ruby will also lend a helping hand at times. Your party members can attack, use the above mentioned skills, defend, and use items. Once again, enemies are a certain amount of space away from your characters. If your melee fighter is out of range but wishes to attack a monster, they will walk a certain distance and stop, thus wasting their turn. Some characters can attack more than once. Also, you can equip crests that will let your party members have access to various special attacks.

Battles can range from very easy to very hard. Bosses near the end of the game can take a quite a beating before they go down. However, level grinding was never a chore and there is nothing more exciting than learning a new spell or skill upon a level up.

Presenting Perfect Presentation!
Working Designs knows how to sell a collector’s item. The packaging of Eternal Blue is more extravagant than it was in Silver Star Story. You will get a leather-bound instruction manual, character stands, a full-sized Lucia’s pendant, a music CD (which, unfortunately, has the songs remixed to sound awful), and another Making Of Lunar CD. In the end, those who are able to find the game new will be in for a real treat.

Soar Some More!
Surprisingly, I was able to play through LUNAR 2 more than once. Even though the game lacks replay value, it had a certain something that was missing from Silver Star Story that made it worth the second trip. Maybe it was the fun cast of the characters? Maybe it was the endless amount of options available with the skill crests? Maybe it was just the fact that Eternal Blue was better than Silver Star Story? Whatever the reason, and despite some of the game’s annoying flaw involving Hiro’s movement, LUNAR 2: Eternal Blue Complete is a fun RPG for anyone looking for some old-school fun.